an optical system in which the space between the object and the first lens is filled with an immersion fluid (see Figure 1). Immersion systems are used in microscopes. Cedar or mineral oil (with an index of refraction of 1.515), a solution of glycerin in water (1.434), water (1.333), monobromonaphthalene (1.656), vaseline oil (1.503), and methylene iodide (1.741) are used as immersion fluids. 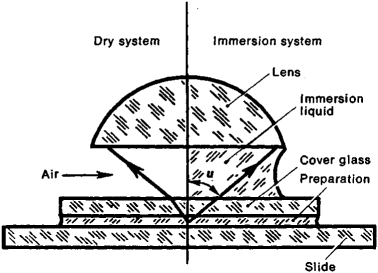 The optical characteristics of an immersion fluid (dispersion and index of refraction) are taken into account in the design of the immersion system; therefore, such a system may be used only with the fluid for which it was designed. Otherwise the image quality will deteriorate sharply. The inclusion of lens in an immersion system provides the possibility of increasing its aperture A and consequently the resolution of the microscope. A “dry” system cannot have A > 1, and A is as high as 1.3 in oil immersion systems and to 1.6 in a monobromonaphthalene system. In an immersion system light diffusion is reduced, and the image contrast is thus increased. This is especially important for the investigation of poorly reflecting objects.

Immersion systems make possible the study of objects that lie at different depths in the immersion fluid by immersing the lens in it. For example, microorganisms can be observed in water with a lens designed for immersion in water.

Feedback
Flashcards & Bookmarks ?
Please log in or register to use Flashcards and Bookmarks. You can also log in with
Flashcards ?
My bookmarks ?
+ Add current page to bookmarks
Mentioned in ?
References in periodicals archive ?
(2005) who tested the 4-minute immersion system every 5 hours and different plant regulators and obtained positive results on the multiplication of the explants, as well as, Debnath (2017), who concluded that the temporary immersion system is efficient for the propagation of this species.
Temporary immersion biorreators: efficient technique for the propagation of the 'Pircinque' strawberry/ Biorreatores de imersao temporaria: tecnica eficiente para a propagacao de morangueiro 'Pircinque'
In addition, because this system is offered as an option for the Fujitsu Server PRIMERGY series(5) of x86 servers, the latest models can be incorporated into this immersion system going forward.
Fujitsu Launches Liquid Immersion Cooling System That Lowers Total Cost of Ownership
In this paper, computational fluid dynamics (CFD) simulation was tried at first for making basic design of the liquid cooling immersion system with natural convection, and next the actual experiment was demonstrated.
Effective Cooling of Server Boards in Data Centers by Liquid Immersion Based on Natural Convection Demonstrating PUE below 1.04
This result can be explained because the temporary immersion system provides a highly aerobic system for the plant growth, as there is forced ventilation through the vessel lid, however the immersion times, the duration and frequency of the immersion are the most decisive parameter for a successful micro-propagation (BERTHOULY; ETIENNE, 2002; WATT, 2012), as they influence nutrient and water uptake and consequently hyperhydricity of the cultured material.
The use of continuous, temporary immersion bioreactor system and semisolid culture medium for the production of Eucalyptus camaldulensis clones/Uso de biorreatores de imersao continua, temporaria e meio de cultura semissolido na producao de clones de Eucalyptus camaldulensis
The solution developed by Roll consists of a series immersion system with three basins for process steps including ultrasonically supported cleaning, rinsing and rinsing with deionised water.
Three cleaning systems for three different tasks: cleaning is vital for effective surface treatment
Enhancing Communication For Individuals With Autism: A Guide to the Visual Immersion System
Enhancing Communication For Individuals With Autism: A Guide to the Visual Immersion System
US-based Midas Green Technologies is showcasing its proprietary Data Center Immersion System, Midas XCI at the Gitex technology week between October 12 and 16.
HVAC solution, Midas XCI to be showcased at Gitex
(2004), working with different Crescentia cujete growth systems, reported that a bigger growth of the root system was observed in temporary immersion system when compared to the micropropagation in solid and liquid media.
Cattleya walkeriana growth in different micropropagation systems/ Crescimento de Cattleya walkeriana em diferentes sistemas de micropropagacao
New alternative for micropropagation in temporary immersion system of plantain cultivar "INIVITPV-2011" (AAB)
Nueva alternativa para la micropropagacion en inmersion temporal del cultivar de platano vianda "INIVITPV-2011"(AAB)
Another contribution in this section that is of interest to educators is Ni Chasaide and Regan's chapter "Immersion Education in Ireland and Canada: L2 Immersion Adolescents in L1 Anglophone Settings." Ni Chasaide and Regan do an excellent job at comparing the French immersion system in Canada with the gaelscoileanna (Irish immersion schools) while appreciating the different contexts and spaces that each language occupies as the other official language.
Regan, V., Lemee, I., & Conrick, M. (2010). Multiculturalism and Integration: Canadian and Irish Experiences