A force, also known as impulsive force, which acts only during a short time interval but which is sufficiently large to cause an appreciable change in the momentum of the system on which it acts. The momentum change produced by the impulsive force is described by the momentum-impulse relation. See Collision (physics), Impulse (mechanics)

a forceful collision between two bodies. In English the term “impact” is also sometimes applied to the impulsive forces acting in collisions. The concept of impact need not be restricted to the collision of solid bodies. For example, we may speak of the impact of a jet of fluid on a solid body and the impact of a solid body on the surface of a liquid. The Russian term for impact—udar—also has the meaning of shock and consequently is applied to a number of additional phenomena, such as a water hammer and the action of an explosion or shock wave on a body.

The interval of time during which an impact occurs is small and usually ranges from several ten thousandths to a few millionths of a second. The impulsive forces acting at the areas of contact of colliding bodies, however, are very large. These forces vary within broad limits during the time of impact and reach values such that the average pressure (stresses) at the areas of contact is of the order of 104 or even 105 kilograms-force/cm2 (1 kilogram-force/cm2 = 105 newtons/m2).

During the time of contact, the action of the impulsive forces causes a substantial change in the velocities of the points of a body. Other possible consequences of impact include permanent deformation, the production of sound waves, the heating of the bodies, and the occurrence of changes in the mechanical properties of the materials composing the bodies. When the impact speed exceeds its critical value, a body will fracture at the place of impact. The critical speeds for metals range from about 15 m/sec, in the case of copper, to about 150 m/sec or more, in the case of high-grade steels.

The change in the velocities of points of a body during impact can be determined by methods of the general theory of impact. As a measure of the mechanical interaction of bodies during impact, these methods use not the impulsive force P but the impact impulse S, which is the impulse of the force during the time of impact T. Since T is small, the impulses of all external forces (such as gravity) and the displacements of the points of the body during the impact are disregarded. The basic equations of the general theory of impact follow from theorems on the change of the momentum and angular momentum of a system in a collision. The velocities after the impact can be found by means of these theorems when the applied impact impulse and the velocities before impact are known. If the body is not free, the impulsive constraints can also be found.

When two bodies collide, the collision can be divided into two periods. The first period begins at the instant that points A and B of the bodies (see Figure 1) come into contact. At this instant their rate of approach is vAn – vBn, where vAn and vBn are the 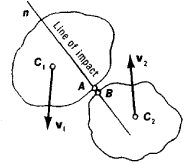 components of the velocities vA and vB along n, the common normal to the surfaces of the bodies at A and B. This normal is known as the line of impact. By the end of the first period, the bodies have ceased moving toward each other, and part of their kinetic energy has been transformed into potential energy of deformation. In the second period, the reverse transformation occurs: the potential energy of elastic deformation is transformed into kinetic energy of the bodies, which are now separating. At the end of the second period, points A and B are moving apart at the rate VAn – VBn. If the bodies are perfectly elastic, the mechanical energy is completely restored by the end of the second period, and ǀVAn – VBn = ǀvAn – vBnǀ. On the other hand, the impact of perfectly inelastic bodies ends with the first period; in this case, VAn – VBn = 0.

When real bodies collide, the mechanical energy is only partially restored by the time the impact ends. The rest of the energy is lost as a result of the permanent deformation of the bodies, the heating of the bodies, and so on. Thus, ǀVAn – VBnǀ < ǀvAn – vBnǀ. The losses are calculated by introducing the coefficient of restitution k, which is assumed to depend only on the physical properties of the materials of the bodies:

In the case of impact involving a stationary body, VBn = vBn = 0 and k = – VAn/vAn. The value of k is determined experimentally. One method is to measure the height h reached by a ball in its rebound after falling freely onto a horizontal plate from a height H; in this case,

. Experimental data yield the following values of k: 0.5 for wooden balls, 0.55 for steel balls, 0.89 for ivory balls, and 0.94 for glass balls. In the limiting cases of perfectly elastic and perfectly inelastic impacts, k = 1 and 0, respectively. When the velocities before impact and the coefficient k are known, it is possible to determine the velocities after impact and the impact impulse S acting at the points of collision. 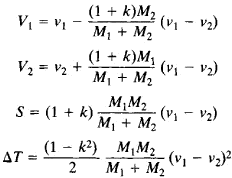 where ΔT is the kinetic energy lost by the system during the impact and M1 and M2 are the masses of the spheres. In the special case where k = 1 and M1 = M2, we have V1 = v2 and V2 = v1. In other words, spheres with identical masses exchange velocities during a perfectly elastic collision, and ΔT = 0.

To determine the duration of impact, the impulsive forces, and the stresses and deformations that the forces produce in the bodies, it is necessary to take into account the mechanical properties of the materials of the bodies, the changes in the properties during the impact, and the nature of the initial and boundary conditions. The solution of the problem is complicated not only by purely mathematical difficulties but also by the lack of sufficient data on the parameters governing the behavior of the materials of the bodies under impact loading. Consequently, a number of simplifying assumptions must be introduced into the calculations.

The most highly developed theory of impact is that dealing with perfectly elastic bodies. This theory assumes that the bodies obey the laws of elastic deformation during impact and that permanent deformation does not occur. A deformation at the region of contact propagates through such a body as an elastic wave at a speed that depends on the physical properties of the material. If the time required for the wave to pass through the entire body is much less than the duration of the impact, the influence of elastic vibrations may be neglected, and the nature of the contact interactions during impact may be considered to be the same as in static loading. H. Hertz’ contact theory of impact is based on these assumptions. If the time required for elastic waves to pass through the body is comparable to the duration of the impact, the wave theory of impact is used for calculations.

The collision of bodies that are not perfectly elastic is a considerably more complicated problem and requires taking both elastic and plastic properties of materials into account. In solving this problem and the associated problems of determining the mechanical properties of the materials of the bodies during impact, studies of the structural changes in the bodies and of fracture processes rely extensively on the analysis and generalization of the results of numerous experimental investigations. Experimental studies are also carried out on the specific characteristics of impulsive loading at high speeds (of the order of hundreds of meters per second) and in explosions. In the case of direct contact between the explosive charge and the body, the explosion can be considered equivalent to a collision at speeds of up to 1,000 m/-sec.

In addition to the collision of bodies, collisions of molecules, atoms, and elementary particles are studied in physics (see also ATOMIC COLLISION).

[′im‚pakt]
(mechanics)
A forceful collision between two bodies which is sufficient to cause an appreciable change in the momentum of the system on which it acts. Also known as impulsive force.
McGraw-Hill Dictionary of Scientific & Technical Terms, 6E, Copyright © 2003 by The McGraw-Hill Companies, Inc.

Feedback
Flashcards & Bookmarks ?
Please log in or register to use Flashcards and Bookmarks. You can also log in with
Flashcards ?
My bookmarks ?
+ Add current page to bookmarks
Mentioned in ?
References in periodicals archive ?
- What is the impact of the new axle norms across various user segments?
Impact of the New Axle Load Norms on the Commercial Vehicle Industry in India, 2019 Research Report
San Francisco Declaration on Research Assessment (DORA) issued in December 2012 during the American Society of Biology meeting was considered almost a fatal blow to Impact Factor.
Impact Factor is Off the Ventilator: Survives and is Thriving
The damage of concrete material under impact loading is also considered by damage index in MAT_CSCM_CONCRETE.
Study on Impact Behavior and Impact Force of Bridge Pier Subjected to Vehicle Collision
The JIF has become the common currency of "scientific quality," assessing the citation rates of articles within a journal rather than of any given article (the range of impact factors reflects approximately the scientific standing of a journal).
Refined impact factor manipulation procedures
The experimental model of a flat projectile transverse impact pipeline was established in [10], and valuable results were obtained with system test.
Numerical simulation of pipeline deformation caused by rockfall impact
Extending this new technology further, grades with super high impact strength have been achieved by applying the new blend technology with POM backbone functionalization and coupling to higher loadings of impact modifier.
Next generation UV stabilized, impact modified Polyacetal copolymer (POM) for automotive interior applications
PROGRAMME: FFEIL * Saving: pounds 391,000 * Impact: High risk given the focus on S4C, ending Ffeil would also have a big impact because it is the only programme we target at a young audience.
IN THEIR OWN WORDS: PROPOSED NEWS AND CURRENT AFFAIRS CUTS, WITH POTENTIAL SAVINGS COST AND PERCEIVED IMPACT
Blendex 338 ABS modifier exhibits good impact efficiency even at low temperatures.
Impact modifiers
To assess economic impact, many studies utilize either the RIMS II (Regional Input-output Modeling System) or IMPLAN[R] (Impact Analysis for Planning) input-output models.
The economic impacts of a reduction in TennCare Program Expenditures on both the State of Tennessee and Shelby County
So while the cone may be poor in asphalt and the impact a better choice in asphalt, the cone can be a better choice in concrete and materials where wear cost is a concern.
Big decisions: a crushing equipment industry veteran offers advice on setting up the ideal crushing plant for a recycling operation
Once the hardware is loose, you can finish removing it with the wrench's ratcheting feature or with a standard electric impact wrench.
Wrench makes a big impact
This number reflects impacts such as tons of pollutants reduced or years of life gained.
The regulation equation: factoring in the price of health