A pool for receiving water draining from the roof in an ancient Roman atrium.
Illustrated Dictionary of Architecture Copyright © 2012, 2002, 1998 by The McGraw-Hill Companies, Inc. All rights reserved 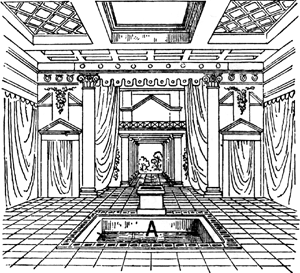 impluvium, A
In ancient Roman dwellings, a cistern set in the atrium or peristyle to receive water from the roofs.
McGraw-Hill Dictionary of Architecture and Construction. Copyright © 2003 by McGraw-Hill Companies, Inc.

Feedback
Flashcards & Bookmarks ?
Please log in or register to use Flashcards and Bookmarks. You can also log in with
Flashcards ?
My bookmarks ?
+ Add current page to bookmarks
Mentioned in ?
References in periodicals archive ?
We find in every house a Tuscan atrium, with a cavaedium or gangway running round the rectangular impluvium, the tank or piscine which catches the rain and drippings falling through the compluvium or central opening in the roof.
Nigeria: behold a city called Benin; Great Benin, also known as Edo, was an important state that flourished in southern Nigeria. In the 15th century, it was an empire distinguished by the sumptuousness and comfort of its capital, Benin City, and by the refinement of its royal art. Robin Walker takes us through the golden age of Benin City
(47.) Hence the importance in the Miles gloriosus of the impluvium, through which Sceledrus spies on his neighbors (173-75).
Playing house: stage, space, and domesticity in Plautus's Mostellaria
A doorway (ostium) and small vestibule led into the atrium with open roof (compluvium) allowing rain water to fall onto a floor area (impluvium), from where it was channelled into subterranean cisterns.
Horticulture in antiquity, with emphasis on the Graeco-Roman era
In contrast, in this chthonic realm the pool is a vestigial impluvium (too vestigial, perhaps), which in Roman and Arabic prototypes collected rain from the heavens above and served almost as a mysterious eye to the earth below.
House of retreat: completed some 30 years after its conception, this remarkable rural house in Andalusia by Emilio Ambasz resonates with place, tradition and nature in a way that has wider lessons for amodern, ecologically responsive architecture. Peter Buchanan considers its significance
In the Villa's atrium the impluvium (central pool) is now open to the sky through the compluvium, as it should be (Fig.
A villa re-imagined: at the end of January, the Getty Villa in Malibu reopened as a museum of Greek, Roman and Etruscan antiquities. This special issue of Apollo celebrates an eagerly awaited event
This large central hallway typically had a fair sized rectangular hole in the roof (compluvium) through which rainwater fell and collected in an impluvium (no 4) or catchment pool.
Light, space and affluent taste: ancient pompeian houses and their decoration
Campo Baeza refers to the interior of this, his most important building to date, as an 'impluvium of light'.
Treasure chest: continuing the tradition of monumental bank buildings, the huge new savings institution on the edge of Granada relates to the traditions of the city and almost exudes the notion of security