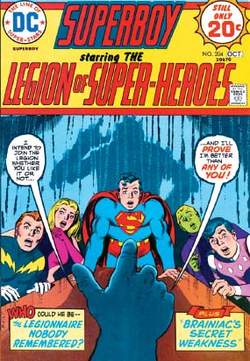 Every kid needs friends, and Superboy, the prodigious youth starring in DC Comics’ “Adventures of Superman When He Was a Boy,” was certainly no exception. Enter the Legion of Super-Heroes (LSH): the magnetically-powered Cosmic Boy, the mind-reading Saturn Girl, and the electricity-generating Lightning Boy, who materialized in DC Comics’ Adventure Comics #247 (1958). Hailing from the future—the thirtieth century, to be exact—this teenage trio time-travels to Super-boy’s era to recruit him into their club. Thanks to the Legion’s time “bubble,” the Boy of Steel finds himself in his hometown of Smallville, one thousand years hence, where his new superpals are only part of a larger clique (although the other young heroes’ faces are shadowed) whose headquarters (their clubhouse) is an upside-down spaceship resembling a prop from a late 1950s sci-fi movie. The Legion’s entire depiction of the future smacks of the post-atomic age’s vision of the world of tomorrow: Robot factories, jet packs, and yes, even flying cars abound! After proving himself a “super-good sport” by surviving a rigged initiation (hoaxes were popular story gimmicks during this era in the Superman comics), Superboy is sworn in as a Legionnaire and returns home to proudly show his father, Pa Kent, a prize ribbon decreeing him “Super-Hero Number One.”

Mort Weisinger, editor of the Superman family of titles, intended Adventure #247’s tale “The Legion of Super-Heroes” as nothing more than a throwaway. Readers had other ideas, however, and mail demanding that the Legion return flooded the DC offices. Twenty issues later, they were back (with Lightning Boy rechristened as the alliterative Lightning Lad), and before long the LSH also encountered Supergirl (on yet another recruitment mission). The Legion’s roster expanded with more superteens whose heroic names easily identified their powers: Chameleon Boy, Colossal Boy, Invisible Kid, Phantom Girl, and Triplicate Girl. Issues cover-spotlighting LSH members sold so well that “Tales of the Legion of Super-Heroes” bumped “Tales of the Bizarro World” out of Adventure and became a regular monthly feature beginning with issue #300 (September 1962), and before long the Legion ultimately seized the entire title from co-star Superboy.

Soon the Legion became truly that, with an enormous cast including, but not limited to, Ultra Boy, Superboy’s “brother” Mon-El, Brainiac 5 (the descendent of Superman’s android enemy), Sun Boy, Star Boy, Shrinking Violet, Lightning (later Light) Lass, Bouncing Boy, and, believe it or not, Matter-Eater Lad, as well as standbys the Legion of Substitute Heroes and the Legion of SuperPets. Science remained a major element in the tales, with some upgrades along the way, like the Legion’s original jet packs being replaced by anti-gravity belts. And a rogues’ gallery, including the Time Trapper, the Legion of Super-Villains, and even the twentieth century’s Lex Luthor, began to appear and reappear.

While simple in concept, the early Legion of Super-Heroes series was surprisingly complex for its time. Its pretense as a superhero “club” veiled its true message of brotherhood—members of the LSH migrated from a variety of worlds across the galaxy, which had banded together as the United Planets and shared a common language, Interlac. This interplanetary harmony, however, reflected the Anglo-centric thinking of the late 1950s and early 1960s: Despite their otherworldly origins, every Legionnaire was white, except for the orange-skinned, pointy-eared Chameleon Boy and the green-skinned Brainiac 5. Basing itself in thirtieth-century Metropolis (not Smallville, as in the LSH’s initial outing), the Legion was often aided in its protection of Earth by the high-tech Science Police. The LSH operated under a strict constitution, which stipulated, among other things, a maximum age of eighteen, the annual appointment of an acting leader (who was chosen by the vote of the readers), and an expulsion provision (several Legionnaires were debarred in solemn hearings). Weisinger printed stories that revealed the dangerous consequences of superheroics: In an early battle, Lightning Lad lost an arm, and later his life (although he soon returned from the dead), and one of Triplicate Girl’s three bodies was destroyed by the menacing machine called Computo, leaving her Duo Damsel.

Throughout the mid-1960s, the Legion’s popularity grew, and the series cultivated a loyal and often vociferous fan base, including a teen named Jim Shooter. Shooter lobbied editor Weisinger for work by pitching crudely illustrated, but boldly imaginative stories, and soon the young scribe was authoring the LSH feature in Adventure. Frequently paired with penciler Curt Swan, best known as “the” Superman artist of the 1960s (who disliked drawing LSH because of its sizeable cast and asked that his Legion stories feature smaller numbers of characters), Shooter’s LSH run in Adventure was noteworthy due to its development of the young heroes’ personalities: Each cast member was individually and consistently characterized, from Lightning Lad’s impulsiveness to newcomer Princess Projectra’s (actual royalty!) snobbishness. The Legionnaires often referred to each other by their otherworldly civilian names—for examples, Cosmic Boy/Rokk Krinn, Chameleon Boy/Reep Daggle, and Shrinking Violet/Salu Digby—and as the series progressed, more was revealed about their parents, siblings, and home planets. Under Shooter’s tenure, Legion mainstays like flight rings, the merciless magician Mordru, and the fearsome Fatal Five entered the lore. By the late 1960s, Shooter and Swan vacated the thirtieth century, bringing the Legion’s first glory days to a close, and the series hobbled along with no true creative direction until being ousted from Adventure Comics by Supergirl beginning in issue #381 (June 1969), and temporarily demoted to the backup spot in Action Comics, before being retired.

The Legion didn’t lay dormant for long, returning in 1971 as a backup in Superboy before later taking over the title (again). The LSH enjoyed its second heyday in the 1970s: Hot new artists like Dave Cockrum and Mike Grell became fan favorites on the series, the heroes’ garb was modernized (Phantom Girl wore bell bottoms and Element Lad sported a perm), and new characters like Wildfire and Tyroc (the first black member to break the LSH’s color barrier) joined the team. The Legionnaires aged to their late teens, and romances took root, with several members even getting married. Science fiction influences intensified, and the dated futuristic vision of the 1960s was replaced by technological marvels, including an expansive headquarters with a full training facility, and warring alien races that defied the laws of the United Planets. With its intricate themes and scientific inspirations, Legion of Super-Heroes became the comic book equivalent of Star Trek, and continued to boast a loyal fan following.

Writer Paul Levitz began a lengthy run on Legion in 1982, and along with artist Keith Giffen made the series DC’s second best-selling title, trailing the company’s top hit, The New Teen Titans. Levitz and Giffen’s most celebrated Legion storyline, “The Great Darkness Saga,” employed twentieth-century villain Darkseid as the future team’s antagonist. Legionnaires came and went, married and had children, and the series matured, evolving away from its unsophisticated original concept of a club for superkids. But throughout myriad changes, one constant remained: Superboy, a recurring and popular member. Then came John Byrne.

Writer/artist Byrne was Marvel Comics’ “fix-it” man, having resuscitated several failing titles for DC’s chief competitor. Hired by DC to orchestrate a highly anticipated Superman relaunch that commenced with the miniseries The Man of Steel (1986), Byrne excised Superboy from the Superman mythos, forcing the Legion to readjust without its core member. It was explained that a Superboy from an alternate, “pocket” universe was the Legion’s teammate, not the younger self of the “real” Superman (and then the young hero flew into comics limbo). With this revision—perceived as contrived by some, convoluted by oth-ers—the Legion began to stray even further from its kid-friendly roots. Frequent tie-ins to twentieth-century continuity, including team-ups with Superman and a spinoff series called L.E.G.I.O.N. ‘89 (later ‘90, then ‘91, etc., before getting the boot in 1994), made the LSH franchise harder to follow.

A 1989 Legion of Super-Heroes reboot featured an older and less optimistic Legion, sans costumes and codenames, in a densely plotted series occurring immediately after a then-unexplained “five-year gap” in story continuity (although details would later emerge). Giffen was the chief architect of this version of Legion, applauded by sci-fi aficionados for its intricacy but ignored by readers yearning for softer, more accessible fare. In this incarnation, the future Earth was destroyed, and a more reader-friendly team featuring teen versions (presumed to be clones) of the now-adult Legion spun off into their own title in Legionnaires #1 (1993). This younger, hipper group kept some classic character names (Cosmic Boy and Saturn Girl) as a historical nod, updated others (Lightning Lad became Live Wire and Triplicate Girl, Triad), and introduced a new wave of members. Yet Legionnaires, and its companion title Legion of Super-Heroes, continued to build upon decades of already cluttered continuity, and readers—as well as editors and writers—were hopelessly confused. Housecleaning was in order.

Zero Hour: A Crisis in Time (1994) was DC’s answer. This crossover, appearing throughout many of the publisher’s superhero titles, readjusted DC’s timeline, allowing for revisions including a restarted Legion. As of 2004, the LSH’s comic was titled simply The Legion, and borrows the best rudiments of the Legionnaires redux in a science-heavy tapestry considerably darker in tone than the original concept.

A 2007 reboot actually restored the Legion’s original, classic continuity, with the teenage Superman once more established as having been a member. Paul Levitz returned as the Legion’s writer in a new comic series that began in 2010, and he went on to write the Legion of Super-Heroes monthly series, drawn by Francis Portela, that premiered in September 2011. A companion series, Legion Lost, debuted the same month.

Legion members Cosmic Boy, Saturn Girl, and Lightning Lad (respectively voiced by Jason Priestley, Melissa Joan Hart, and Chad Lowe), guest starred in a 1998 episode of Superman: The Animated Series. Brainiac 5 and Bouncing Boy appeared in a 2006 episode of the animated Justice League Unlimited, which had cameos by other Legionnaires. The Legion of Super Heroes animated series, which includes the young Superman, debuted on The CW network in 2006.

Beyond its sales peak in the early 1980s, the Legion of Super-Heroes has never risen to Ateam status, probably due to its cumbersome cast and rich history. But the concept has commanded perhaps the most dedicated fan base of any DC series. —ME & PS