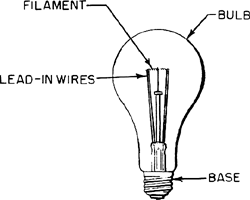 incandescent lamp
A lamp from which light is emitted when a tungsten filament is heated to incandescence by an electric current.
McGraw-Hill Dictionary of Architecture and Construction. Copyright © 2003 by McGraw-Hill Companies, Inc.

Feedback
Flashcards & Bookmarks ?
Please log in or register to use Flashcards and Bookmarks. You can also log in with
Flashcards ?
My bookmarks ?
+ Add current page to bookmarks
Mentioned in ?
References in periodicals archive ?
It is climate change, allegedly caused by the increased emissions of C02 and other greenhouse gases, that provides the rationale for the global eradication of incandescent light bulbs, as we have seen.
Shedding light on the global green agenda: the story behind why the government caused the demise of the incandescent light bulb is worth knowing, because we're set to see the same scenario repeatedly enacted
Royal Philips Electronics has announced that it will continue its independent efforts to phase-out incandescent light bulbs in the GCC.
Philips to continue incandescent bulb phase-out
Texas Republican Congressman Joe Barton has elected to fight to save the incandescent light bulb, asserting that they are cheaper and more environmentally correct, and because "the American consumer should be able to make the choice." Barton adds that the move toward fluorescent light bulbs dramatically impacts the low-income consumer, who "can't afford $4 or $5 for a light bulb."
The death of the incandescent light bulb and the jobs that go with it
Best Alternatives: Despite their mercury content, compact fluorescents are still considered much more eco-friendly than incandescent light bulbs by the U.S.
The wise demise of plastic bags
Much more efficient than incandescent light bulbs, fluorescents last anywhere from 20- to 30-times longer than equivalent incandescent lamps.
Lighting
We also have a vast selection of light bulbs, both low energy and the new Energy Saver for all areas of the home and are here to help and advise people on the recent changes." Graham said press reports about the demise of the traditional incandescent light bulb have led many to worry about the new choices.
Lighting, bulbs and so much more
Swan's years of work on perfecting the incandescent light bulb replaced the candle, oil and gas lamps, with their flickering light and fumes.
Tale of tragedy behind the triumphs of Joseph Swan
The rhetorical gloves will come off on November 8 during the Opening Session of the conference, as world-renowned lighting designer and author Howard Brandston (left) andaj den Daas, chairman of Philips Lighting North America, debate the most contentious lighting issue of our time--the ban of the incandescent light bulb. Brandston has been outspoken in his criticism of the incandescent ban, not only within the lighting community but in the mainstream media, including the pages of The Wall Street Journal and the airwaves of Fox News.
Lighting's great debate: may the better man win
By the end of 1879, Edison had developed the first practical incandescent light bulb after a long period of trial and error that gave proof to his much-quoted adage that "genius is one percent inspiration and ninety-nine percent perspiration." The filament in the successful bulb was carbonized sewing thread, but scores of other materials had been tried previously.
The man who lit up the world: Thomas Edison changed the world through his ability, persistence -- and hard work. "Genius," he said, "is one percent inspiration and ninety-nine percent perspiration". (History: American Ingenuity)
The Minister also said the Mailu-Suu incandescent light bulb factory exports 70-80% of its lamps to Russia and Kazakhstan.
Parliament to make decision on Kyrgyztan's entry into Customs Union -- Speaker
The Milky Way's overall colour is about the shade of white halfway between an incandescent light bulb and the standard spectrum white on a TV.
Milky Way 'seems as white as spring snow' from another galaxy