Before incubation the eggs are fertilized by the wet, dry, or semidry method. In the Russian method, mature eggs and sperm are “strained” by lightly pressing the abdomen of a fish with the fingers; then the eggs and sperm are carefully mixed and moistened with water to activate movement of the spermatozoa, which is when fertilization takes place. The fertilized eggs are incubated in a body of water (nonplant method) or in fish-breeding plants (plant method).

The eggs of Salmonidae, Acipenseridae, Cyprinidae, and a few others are incubated by the plant method. Fish hatcheries are equipped with departments of incubation apparatus, principally of two types: (1) for incubating eggs (of salmon, trout, sturgeons) in a motionless state (for example, Schuster, Williamson, Orāvs, and trough apparatus) and (2) for incubating small eggs (those of whitefish, eggs of pike and carp from which the sticky envelope has been removed) suspended in a current of water that enters from below (for example, Weiss and Chase apparatus). 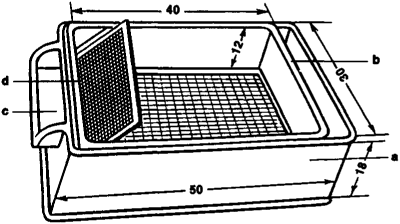 The Schuster apparatus (Figure 1) consists of two metal boxes, one inside the other, the inner one having a screened bottom. Water from the water source enters the outer box and passes through the screened bottom into the inner one, washing the eggs up from the bottom, and flows out through a gutter. Four to eight Schuster apparatus are placed in a row in ladder-like fashion.

The Sadov-Kokhanskaia trough apparatus for incubating the eggs of sturgeons from which the sticky envelope has not been removed consists of a system of plastic troughs attached in ladder-like fashion to a metal frame (21 troughs in a frame). The water flows by gravity from the highest trough to the lowest and is carried off in a drainpipe. The embryos hatch in a pool of water.

The Weiss apparatus (Figure 2) is a bottle-shaped glass vessel with a standard volume of 8 liters and a stopper at the narrow end, into which a small metal pipe is inserted. Water enters the apparatus under pressure from below and keeps the eggs in a suspended state. In incubation departments Weiss apparatus are placed in stacks. (The capacity of improved apparatus is up to 110 liters.) Sticky eggs are also incubated in Voinarovich mist chambers—illuminated rooms equipped with water pipes with water sprayers mounted in the pipes (every 30–50 cm). In the chambers the substrate with eggs adhering to it is attached to supports, and the eggs are sprayed through the sprayers under a pressure of 50–250 kilonewtons/m2 (0.5–2.5 atmospheres). Shortly before the embryos hatch, the substrate is transferred to a body of water, where hatching takes place.

Interest in artificial fish-breeding is growing in many countries of the world, as a result of which the scale on which the eggs of valuable fish species are incubated is increasing, from the catching of eggs in bodies of water and their incubation in breeding tanks in the current (Japan, China, Malaysia) to incubation of artificially fertilized eggs in improved apparatus with closed (Austria) and circular (Japan) systems of circulating a limited amount of water at a definite temperature. Incubation apparatus with systems based on the same principles as those used in the USSR, or with certain modifications, are used widely throughout the world.