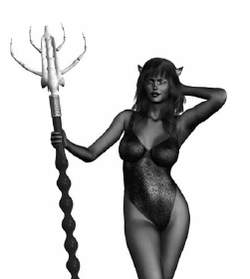 Female demons known as succubi (and their male counterparts, the incubi) are evil spirits that sexually molest human dreamers for nefarious purposes.

[M]en may at times be begotten by means of Incubi and Succubi, [and] it is contrary to the words of the saints and even to the tradition of Holy Scripture to maintain the opposite opinion.

The idea of spirit beings or demons who take the form of people in order to have sex with human beings is actually very ancient. In Western demonological lore, speculation on such ideas grew out of two short verses in chapter six of Genesis:

[T]he sons of God saw that the daughters of men were fair; and they took to wife such of them as they chose. (6:2)

The Nephilim were on the earth in those days, and also afterward, when the sons of God came in to the daughters of men, and they bore children to them. These were the mighty men that were of old, the men of renown. (6:4)

In these rather strange verses, the expression “sons of God” was taken to indicate angels. And while scripture does not condemn these actions, the traditional interpretation of these passages is that these sons of God are fallen angels. This history of interpretation provided biblical legitimization for the notion of incubi and succubi. The idea was supported in the Middle Ages by St. Augustine, who wrote:

It is a widespread opinion, confirmed by direct or indirect testimony of trustworthy persons, that the Sylvans and Fauns, commonly called Incubi, have often tormented women, solicited and obtained intercourse with them.

Although sterile themselves, incubi (demons in male form) could supposedly impregnate women with seed taken by succubi (demons in female form) from men—a belief that was sometimes used to explain pregnancies resulting from secret affairs. This type of explanation not only absolved women from charges of licentiousness, but, because the sperm was taken from men, it also saved the child from being executed as an offspring of a demon. The authors of the influential Malleus Maleficarum (“Witch Hammer,” 1486) were seemingly obsessed with explaining this process, and devoted several sections to explaining its mechanism, such as:

Devils do indeed collect human semen, by means of which they are able to produce bodily effects; but his cannot be done without some local movement, therefore demons can transfer the semen which they have collected and inject it into the bodies of others.

Some demons can collect the semen from living men by assuming the form of succubi, transforming themselves into incubi and then injecting semen into women. In other cases, semen is transferred from succubi to incubi. Heinrich Kramer and James Sprenger, the authors of the Malleus Maleficarum, speculated that this division of labor may have arisen from the prior assignment of demons to specific people—apparently the diabolical equivalent of guardian angels:

Perhaps one devil allotted to a woman, should receive semen from another devil, allotted to a man, that in this way each of them should be commissioned by the prince of devils to work some witchcraft; since to each one is allotted his own angel, even from among the evil ones….

Alternatively, the two inquisitors speculated that this pairing of efforts may arise from the “filthiness of the deed, which one devil would abhor to commit”—implying that certain demons would object to playing both the male role and the female role in the semen transfer process.

Why, however, are demons so intent on promoting human reproduction? Kramer and Sprenger provide a number of different reasons:

The reason that devils turn themselves into Incubi or Succubi is not for the cause of pleasure, since a spirit has not flesh and blood; but chiefly it is with this intention, that through the vice of luxury they may work a twofold harm against men, that is, in body and in soul, that so men may be more given to all vices. And there is no doubt that they know under which stars the semen is most vigorous, and that men so conceived will be always perverted by witchcraft.

In other words, people who copulate with demons are more inclined to sin, and human beings thus conceived are somehow corrupted by this process so that they readily give themselves up to Satan after they grow up.

There were, however, other medieval traditions that asserted the incubi could impregnate mortal women, and that succubi could become pregnant by mortal men. It was, for instance, rumored that Merlin the magician was the offspring of such a union. This notion of semi-demonic children was useful for explaining such phenomena as deformed babies. Incubi were sometimes referred to as demon lovers. Also, some writers asserted that succubi were the same as the wood nymphs of European folklore.

Mortals who willingly responded to the seductive wiles of these beings risked damnation. A papal bull issued by Pope Innocent in 1484, for instance, asserted: “Many persons of both sexes, forgetful of their own salvation, have abused incubi and succubi.” Some of the church fathers, such as St. Anthony, asserted that demons would take the form of seductive naked women who would try to lure him away from his devotions. These experiences were later taken as evidence for the real existence of succubi.

In the seventeenth century Peter Sinistrari suggested that incubi were not demons but rather higher beings, found somewhere in the hierarchy between men and angels, who honored humankind with their attentions. Since exorcism had no effect on these beings, it is one of the characteristics that Sinistrari used to separate them from the evil fiends to which they had been likened up until that time. He merged his views with those of the Church with regard to the sinful nature of relations with these beings by stating that, as long as the mortal involved believes that they lay with a demon, the sin is just as severe as if they actually did. Thus, he was able to suggest that the sin is rooted in the belief of the sinful nature of the act rather than the act itself.

Feedback
Flashcards & Bookmarks ?
Please log in or register to use Flashcards and Bookmarks. You can also log in with
Flashcards ?
My bookmarks ?
+ Add current page to bookmarks
References in periodicals archive ?
Along with her personal succubus, Samara has been introduced to the world of the Cambion and incubi and succubi. One of the Cambion laws holds that demons mate for life.
Reed, Jaime. Burning Emerald: The Cambion Chronicles
ENCYCLOPEDIA OF THE UNDEAD: A FIELD GUIDE TO THE CREATURES THAT CANNOT REST IN PEACE offers a catalog and detailed descriptions of these creatures, from Incubi and Succubi to legends which have influenced other writer's works.
Encyclopedia of the Undead
But in the manuscript the garrulous friar rambles on with stories about cases he has known of incubi and succubi, and how to exorcise them.
Fra Luigi Sinistrari on Lewdness
Part II is a compendium of fabulous stories about the activities of witches-- e.g., diabolic compacts, sexual relations with devils (incubi and succubi), transvection (night riding), and metamorphosis.
Malleus maleficarum
Erotic dreams led to belief in incubi and succubi. Dreams seemed to be doorways into a different world, to be messages from the gods, to be revelations of events at a distance or in the future.
Dreams
Encyclopedia browser ?
Full browser ?
CITE
Site: Follow: Share:
Open / Close