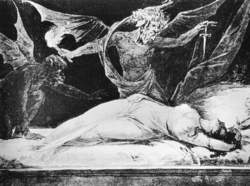 Female (succubus) and male (incubus) demon lovers that, in the Middle Ages, were believed to visit innocent people in the night to seduce them. Those so attacked would wake to feel a heavy weight on their chest, which would turn out to be the incubus or succubus demon. It was believed that malformed children, and even twins, were the result of a union between a woman and an incubus.

The Latin for "nightmare" is incubo, the literal meaning of which is "to lie upon." (From this we get the modern English word "incubator.") The incubus and succubus were related to nightmares; in fact, a visit from one of the creatures was regarded as a nightmare. In the Middle Ages the concept was widely discussed. The initial idea of these two demons may have first arisen from the myths of ancient gods and goddesses seducing humans, but it was the sexually titillated inquisitors at the witch trials during the persecutions that made it seem as if such creatures were almost commonplace.

Many times the demons would assume human shape. It was thought that the same demon could appear as a male or a female. In that way, it could impregnate a woman— first it would appear as a succubus and take semen from a man, and then it would reappear as an incubus and deposit it in a female. Thomas Aquinas said, in his Summa Theologiae (1266-73), "If sometimes children are born from intercourse with demons, this is not because of the semen emitted by them, or from the bodies they have assumed, but through the semen taken from some man for this purpose, seeing that the same demon who acts as a succubus for a man becomes an incubus for a woman." However, there were cases that seemed to throw some doubt on the whole theory of demon visitation. A medieval nun said that she had been attacked by her bishop, Bishop Silvanus. The bishop, however, pointed out that it was obviously an incubus in his form who had tried to seduce her. The convent accepted the bishop's explanation.

Nuns seemed especially susceptible to incubi attack. Ludovico Maria Sinistrari, in Daemonialitate et Incubis et Succubis (1754), told of a nun who would regularly disappear into her cell after dinner. Another nun heard low voices and the sounds of lovemaking through the thin partition between their rooms. Boring a hole in the wall, she saw the nun making passionate love with a "comely youth." After all the other nuns had been allowed to witness the scene, the miscreant was approached. Under threat of torture, she admitted that she had "long been indecently intimate with an incubus." In most of the earlier accounts of copulation between incubi and women, or succubi and men, there was mention of the intense pleasure brought about by this union. But later, toward the end of the fifteenth century, the authorities seemed to realize that attacks should not be made to sound attractive and, after torture, descriptions began to include talk the incubi possessing large, rough penises that emitted ice-cold semen.

The Malleus Maleficarum (1486) made three classifications: (i) those who submit voluntarily (to incubi) as witches; (ii) those brought against their will by witches to sleep with incubi; (iii) those assaulted against their will. As the witch trials gained in fervor, the inquisitors came to expect that a witch would have had relations with an incubus, and each witch was tortured until she confessed to that misdeed. Since women were regarded as far more licentious than men, it was supposed that incubi outnumbered succubi by nine to one.

St. Anthony was said to have been sorely tempted by female demons. According to St. Athanasius's Life of Anthony (c. 361 CE), "The devil, unhappy wight, one night even took upon him the shape of a woman and imitated all her acts simply to beguile Anthony." St. Hippolytus was once visited by a nude woman (c. 230 CE), but when he threw his chasuble over her to hide her nakedness, she turned back into what she really was—a corpse that had been animated.

In the Salem Witch Trials there was suggestion of succubi when Bridget Bishop was charged. She had been a tavern keeper who had two ordinaries, one at Salem Village and the other in Salem Town. The main charge against her seems to have been that she wore a "red paragon bodice" and had a great store of lace. She was also said to retain her youthful appearance despite her advancing years. Various decent, upright, married men of the Puritan community testified that her "shape" had visited them and plagued them in their sleep! On June 10, 1692, she was hung on Gallows Hill.

Feedback
Flashcards & Bookmarks ?
Please log in or register to use Flashcards and Bookmarks. You can also log in with
Flashcards ?
My bookmarks ?
+ Add current page to bookmarks
References in periodicals archive ?
The folklore of every culture includes supernatural figures like the incubus and succubus, which assault the sleeper sexually, or the Old Hag, which paralyzes its victims and sucks their breath away.
Hallucinations
It is that undercurrent of unease that can intrude into even our most joyous moments." Because of the similarity to the words incubus and succubus, Hubunculus became more than a feeling of unease for our quintet--it became a physical antagonist.
Reflection for Woodwind Quintet
Encyclopedia browser ?
Full browser ?
CITE
Site: Follow: Share:
Open / Close