[′in·də‚kād·ər ‚kärd]
(engineering)
A chart on which an indicator diagram is produced by an instrument called an engine indicator which traces the real-performance cycle diagram as the machine is running.
McGraw-Hill Dictionary of Scientific & Technical Terms, 6E, Copyright © 2003 by The McGraw-Hill Companies, Inc.
The following article is from The Great Soviet Encyclopedia (1979). It might be outdated or ideologically biased.

a graphic representation of changes in the pressure of a gas or vapor in the cylinder of a piston engine relative to the position of the piston. An indicator card is usually drawn by means of a pressure indicator. The volume occupied by the gases in the cylinder is plotted along the x-axis and the pressure is plotted along the y-axis. Each point on the indicator card (see Figure 1) shows the pressure in the engine cylinder at a particular volume—that is, a particular position of the piston (point r represents the start of intake; point a, the start of compression; point c, the end of compression; point z, the start of expansion; and point b, the end of expansion). 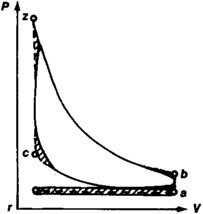 To facilitate design calculations and the comparison of various engines, pressures that change according to the piston stroke are replaced by an arbitrary constant pressure, at which work equal to the work of gases for a cycle with changing pressure is produced in a single piston stroke. The constant pressure is called the mean indicated pressure and represents the work of the gases in relation to the working volume of the engine.

Feedback
Flashcards & Bookmarks ?
Please log in or register to use Flashcards and Bookmarks. You can also log in with
Flashcards ?
My bookmarks ?
+ Add current page to bookmarks
Mentioned in ?
References in periodicals archive ?
This paper is focused to study, compare, and select the proper feature extraction methods used to analyze the sucker-rod pump indicator card data before pattern classification.
Research on feature extraction of indicator card data for sucker-rod pump working condition diagnosis
-- Sud-Chemie Performance Packaging has introduced Humitector[TM] maximum humidity indicator cards, which company officials said display the highest level of relative humidity exposure an artifact has experienced.
Humitector[TM] cards protect art while shipping. (news)
Take a look at the humidity indicator card. If it is not blue, change out the desiccant and check the card.
Don't cut its life short!
Supply support activities (SSAs) and tech supply activities should keep an on-hand supply of humidity indicator cards, humidity indicator plugs and color-change humidity indicator disks for use in replacing expired cards or discs.
Protecting components in storage
To detect fraudulent claims, at least four out of five insurers use fraud awareness training (87 percent), manual red flags or indicator cards (81 percent), and external database searches (80 percent).
Advanced claim analytics and data mining: an overview on improving consistency and bottom-line results