scattering of light in a medium that is due to variation in the motion of its component elementary particles (electrons, atoms, and molecules) that takes place in response to both an incident light wave and the scattered radiation itself. A distinction is made among induced combination scattering (Raman scattering), which takes place with the participation of the intramolecular vibrations of atoms, the rotations of molecules, or the motions of electrons within atoms; induced Mandel’shtam Brilloum scattering, which involves the elastic displacements of molecules (that is, sonic or hypersonic waves); induced scattering of light on polaritons (coupled vibrations of molecules and an electromagnetic field); and other types. Induced light scattering is observed in solids, liquids and gases.

If the intensity of the incident light is very high, nonlinear effects appear in the medium. The microscopic particles of the medium are affected not only by forces with frequencies of the incident ω and scattered ω′ radiations but also by a force acting at the difference frequency Δω—that is, at the frequency of the microscopic particles’ natural vibrations—which leads to resonance excitation of vibrations. We will consider this by using as an example induced combination scattering with the participation of intramolecular atomic vibrations. In response to the total electric field of the incident and scattered light, a molecule is polarized and an electric dipole moment proportional to the total electric field intensity appears on it. The potential energy of the atomic nuclei is changed by a quantity proportional to the product of the dipole moment and the square of the total electric field intensity. As a result, the external force that acts on the nucleus contains a component with difference frequency Δω, which produces resonance excitation of the atoms’ vibrations. This in turn leads to an increase in the intensity of the scattered radiation, which once more reinforces the vibrations of the elementary particles, and so on. In this way the scattering of light itself induces (stimulates) the subsequent scattering process; that is why it has been called induced (stimulated) scattering. The intensity of the scattered light during induced light scattering may be on the order of the incident light intensity.

The excitation of intramolecular vibrations during induced combination scattering (the excitation of hypersound during induced Mandel’shtam-Brillouin scattering, and so on) occurs when induced light scattering takes place in a substance that is in a state of near-equilibrium. Here the frequency of the scattered light ω′ is found to be lower than the frequency ω of the incident light: ω′ = ω − Δω (Stokes process). However, it is possible during induced light scattering not only to excite the motion of microscopic particles but also to suppress it if the initial state of the substance is not in equilibrium. Here ω′ = ω + Δω (anti-Stokes process).

Since the intensities of the incident and scattered radiations are high (106-109 watts per sq cm) in cases of induced light scattering, other nonlinear effects—for example, parametric processes, which cause the production of radiation with a complete set of new frequencies ωn = ω + nΔω, where n = ±1, ±2, ±3, … (Figure 1)—also appear frequently in the substance simultaneously with the induced light scattering. The components for which n >̳ are called anti-Stokes components, and those for which n <̳ –2 are called higher Stokes components. The radiation of these components after they have emerged from the scatterer occurs mainly along conical surfaces with various small (1°-10°) apex angles (for the various components). In an isotropic medium the axes of all the cones coincide with the direction of the scattered beam. In crystals these cones may have various orientations and each component may radiate in two cones. When a photographic film is positioned behind a test specimen perpendicularly to the transmitted beam of frequency ω, rings are produced on it that correspond to the various components of the induced light scattering. 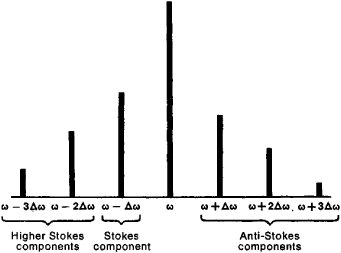 Figure 1. Spectrum of scattered light for induced combination scattering: ω is the frequency of the incident light

Induced light scattering is used to efficiently convert intensive radiation in a laser to radiation with greater brightness and other characteristics; to produce intense hypersound and other types of motion of microscopic particles; and to study the microscopic structure of substances.