[in′düst ′drag]
(fluid mechanics)
That part of the drag caused by the downflow or downwash of the airstream passing over the wing of an aircraft, equal to the lift times the tangent of the induced angle of attack.
McGraw-Hill Dictionary of Scientific & Technical Terms, 6E, Copyright © 2003 by The McGraw-Hill Companies, Inc.
The following article is from The Great Soviet Encyclopedia (1979). It might be outdated or ideologically biased.

in aerodynamics, the part of the aerodynamic resistance of a wing that is caused by the vortices whose axes originate on the wing and are directed downward against the flow. These so-called free vortices of the wing originate from the flow of air near the wingtips (Figure 1) from the region beneath the wing to the region above it. Above the wing, the airflow near the tip results in a flow directed from the tips toward the plane of symmetry; below the wing, from the plane of symmetry toward the tip. As a result, each particle in the wake, behind the wing, rotates about an axis that passes through the particle and is parallel to the velocity vector v of the oncoming flow; here the direction of rotation is opposite for the left and right halves of the wing (Figure 2). Thus, a continuous system of vortices that emanate from every point of the wing surface arises.

Figure 1. Diagram of the appearance of a tip vortex as a result of the flow of air from the area under the wing to the area above it

Figure 2. Cross section of the flow behind the wing in the plane perpendicular to v. The airflow at the wingtips causes a system of free vortices.

In the region between the end planes of the wing, free vortices induce velocities directed downward, and when the flow induced by the free vortices is superimposed on the oncoming flow, it directs it downward through the angle Δα (the flow rake angle). Since the lift of the wing should be perpendicular to the oncoming flow, it is deflected downward through the same angle a (Figure 3). Resolving this force into components along and perpendicular to v, we obtain the induced drag dQindand the lift dY. If the wing has infinitely large span, there is no induced drag. 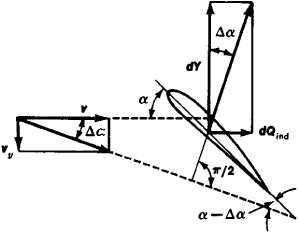 Figure 3. Formation of induced drag as a result of the downwash of the flow by free vortices of the wing: vu is the velocity induced by the free vortices, and Δαis the flow rake angle

Feedback
Flashcards & Bookmarks ?
Please log in or register to use Flashcards and Bookmarks. You can also log in with
Flashcards ?
My bookmarks ?
+ Add current page to bookmarks
Mentioned in ?
References in periodicals archive ?
Therefore, the limitations of the ground on the down wash of wings of the UAV decreased, increasing the induced drag of the UAV, thus increasing its drag coefficient.
Characteristics of Ground Effects of an Unmanned Aerial Vehicle with Medium-aspect-ratio Flying Wings during Take-Off
Additionally, a series of tandem wing configuration with different parameters, including the gap, the stagger, the incidence angle, and the wingspan, are calculated and simulated using the proposed method to analyze the effect of the parameters on characteristics including lift and induced drag of each lifting surface.
Prediction of Lift Coefficient for Tandem Wing Configuration or Multiple-Lifting-Surface System Using Prandtl's Lifting-Line Theory
Now we know what causes the induced drag, and that the induced drag causes the wing tip vortex, and that the strength of the vortex increases as the aircraft slows.
Wake turbulence: we take you into a thorough discussion of how to recognize, avoid and, if necessary, survive a wake event so your loved ones don't have to attend one
The drag coefficients of the WIG craft model with and without endplates do not show high discrepancy for each angle of attack, probably because of reduction of induced drag due to the effect of endplates.
Experimental investigation of a wing-in-ground effect craft
In normal cruise, the flaperons have a -5 degree position, which has the effect of reducing down force on the tailplane and sharply reducing induced drag enough to add several knots to the top cruise speed.
Pipistrel virus SW: not just another LSA: that's mainly because it's blisteringly fast on very little gas. But it takes some glider pilot skills to fly well
By altering the airflow as it Leaves the wingtip, the extensions reduce wingtip vortices and induced drag. Aviation Partners estimates that, depending on the aircraft, the reduction in drag can increase fuel efficiency by as much as 7 percent.
Jets' smaller vortices save 2.5 billion gallons
Wing drag was calculated as the sum of zero-lift drag, induced drag, wave drag, profile drag and interference drag.
Design of future single aisle aircraft
Drag is commonly divided into 3 components: 1) profile drag, generated by friction; 2) induced drag, from the loss of kinetic energy in the wake, which is indissociable from the production of lift; and 3) the parasite drag, which is the drag of the body.
A review of biomechanic and aerodynamic considerations of the avian thoracic limb
A very significant difference between the two is aerodynamic lift costs horsepower and fuel in the form of induced drag, which is roughly proportional to the lift required.
Back to the future: airships and the revolution in strategic airlift: over the next several years the US Department of Defense has some very hard decisions to make regarding strategic airlift. If funding is not available to meet 54.5 MTM/D or more with conventional airlift, either sacrifices in capability must be made or an alternative will have to be found
Also, the tips are tapered to reduce induced drag and power-robbing vortices.
Props to the Wright Brothers: reverse engineering shows how right they were. (Software Solutions)