Also found in: Dictionary, Thesaurus.
Related to Induction Heater: Induction cooker
The following article is from The Great Soviet Encyclopedia (1979). It might be outdated or ideologically biased.

(or inductor), an electromagnetic device used for induction heating. An induction heater consists of two basic parts: a primary coil, which generates an alternating magnetic field, and current feeders, which connect the primary coil to the power supply. An electrically conductive object placed in an alternating magnetic field heats up as a result of the thermal action of eddy currents induced in the parts of the object that are directly enveloped by the primary coil.

Basically, all types of induction heaters may be grouped in two categories, those with simultaneous heating and those with continuous sequential heating. In the first case the area of the primary coil is approximately equal to the area of the surface being heated, so that all regions of the surface can be heated simultaneously. In the second case the article being heated is moved relative to the primary coil, so that the surface regions of the article are heated sequentially.

Induction heaters for surface heating and hardening of various articles, through-heating of forgings, heating of sheet material, and melting of metals differ in design, the frequency of the current being supplied, and the material of the magnetic circuit of the induction system. An induction heater used for heat-hardening simple cylindrical parts by the simultaneous method is shown in Figure 1. The primary coil is made very large to avoid overheating and melting. Frequency of the current supplied to such an induction heater is 10 kilohertz (kHz). There are openings in the surface of the primary coil for supplying quenching water to the heated workpiece after the current has been shut off. Thus, the induction heater itself is also cooled simultaneously. 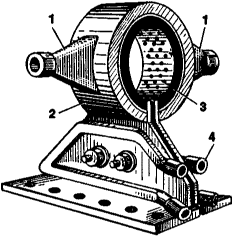 A solenoid, which is used to harden internal surfaces of parts, is the simplest multiturn induction heater. Solenoid induction heaters are capable of heating internal cylindrical surfaces with a diameter of 50 mm or more. Loop induction heaters with a magnetic circuit (Figure 2) are used for openings with diameters of less than 30 mm, and rod heaters are used to heat internal cylindrical surfaces with diameters of less than 15 mm. Such heaters have a tube whose diameter is somewhat smaller than the diameter of the opening being treated. The tube is located coaxially relative to the opening. Induction heaters used in through-heating of forgings are made from a tube; very long tubes are divided into sections, each of which is cooled separately. 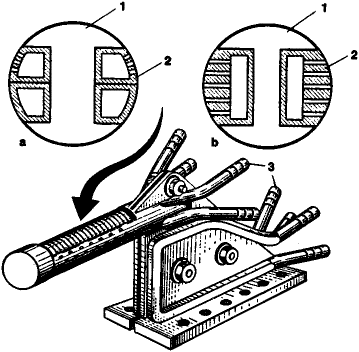 Figure 2. Loop induction heater for hardening internal cylindrical surfaces by the simultaneous method, with rotation of the workpiece: (a) design with separate chambers for cooling the induction heater and supply of quench water, (b) design without continuous cooling; (1) magnetic circuit, (2) primary coil, (3) piping for water cooling system

Flat surfaces of articles are heat-hardened using induction heaters with a primary coil in the shape of a flat spiral or zigzag (for small areas) or using the continuous sequential heating method, in which the part being heated is moved over the primary coil (Figure 3). Sectional induction heaters with separate electric current feed for each section are also used. Surfaces of varying width and the required shape may be hardened (heated) by switching the sections on and off in a predetermined sequence. End surfaces are heated using zigzag-shaped induction heaters; uniform surface heating is achieved by rotating the workpiece. 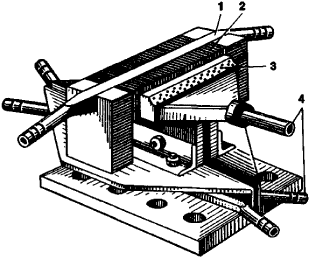 Sheet and strip material is heated most efficiently in a transverse magnetic field (Figure 4). In this case the thickness of the sheet must be smaller than the penetration depth of current (usually at frequencies of 10–70 kHz). Gear teeth are hardened using loop induction heaters that enclose the tooth from both sides. To harden the tooth space, the primary coil is located along the circumference of the gear. In this case parts of magnetic circuit are placed opposite the tooth spaces and enter them in the operating position.

Feedback
Flashcards & Bookmarks ?
Please log in or register to use Flashcards and Bookmarks. You can also log in with
Flashcards ?
My bookmarks ?
+ Add current page to bookmarks
Mentioned in ?
References in periodicals archive ?
The mixture was deposited on the melted component and dried using the induction heater. The dimensions of the lining were smaller than the dimensions of the heater and, consequently, after introducing the blank with the lining into the heater, it was possible to place dry sand in the gap between the wall of the heater and the coating ensuring the reliable thin wall lining.
Intensification of molten metal flows in the liquid pool in induction heating
"Conventional induction heaters need more time to reach the uniform temperatures needed to turn the billet into a profile," Mueller said.
High productivity marks for superconductive induction
The manufacturer will use the induction heater in a newly commissioned facility to extrude copper and copper alloy billets.
Super induction
OD, with the machine control cycling the induction heaters on and off every 6 sec just as it does with band heaters, the shallow-well thermocouples detected only a few degrees oscillation during the 92-sec molding cycle--but the deep-well thermocouples detected five times greater oscillation in temperature due to the entry of cold resin for each shot.
Induction barrel heating may use up to 70% less energy
ABP also exclusively provides special induction heaters to Primetals Technologies for endless strip production, which helps provide a competitive edge.
MHI and Primetals Technologies to Acquire ABP Induction Systems
is a family owned and operated manufacturer of high performance induction heaters. Our headquarters and all manufacturing is located in Elgin, Illinois, just west of Chicago.
Induction Innovations Launches Inductor Lite
MPP capacitors are appropriate for switching power supplies and DC Link applications in products such as power inverters, UPS systems, solar heaters, induction heaters, motor controllers and other demanding applications.
Film capacitors suit DC link, other high-performance apps
Xaloy Inc., New Castle, Pa., recently began extrusion trials of its energy-saving nXheat induction heaters on extruder barrels.
Induction barrel heating tested for extrusion
TEPCO and other power utilities are waging a marketing campaign for electromagnetic induction heaters that compete with gas ovens, with an eye to boosting electricity sales.
Tokyo Gas offers companies monthly discount of up to 40,000 yen
The new NIM series RF radiation meter from LINK MICROTEK has been specifically designed to enable plant managers and safety professionals to take quick and easy measurements of emissions from industrial sources such as RF heat sealers, RF induction heaters and semiconductor fabrication equipment.
RF radiation meter
Induction heaters also last much longer and provide more uniform heat, Xaloy claims.
'Hybrid' induction barrel heating pays off even faster