The spectroscopic study of the interaction of matter with infrared radiation. Electromagnetic waves from the long-wavelength limit of visible light at 800 nanometers to the shortest microwaves at 1 mm are used. In the wave-number units usually employed (oscillations per centimeter, read as reciprocal centimeters), this corresponds to 12,500–10 cm-1. See Infrared radiation

The broad wavelength range of infrared radiation, and the few transparent optical materials available, require that infrared instruments be designed with reflecting optics: radiation is focused with front-surface aluminized mirrors rather than lenses. Because of strong infrared absorption by water vapor and carbon dioxide, operation takes place in a vacuum or the optical path is purged with dry nitrogen. Absorption spectroscopy is the principal method, where attention centers on the frequencies absorbed by the sample from a broadly emitting source. However, spectrometers and interferometers can easily be adapted to emission spectroscopy.

In a dispersive spectrometer (see illustration), infrared radiation from the source Q is focused by a spherical mirror M2 onto the entrance slit S1 of the monochromator, after passing through the sample cell SC. The beam is collimated by the off-axis paraboloid mirror M3, dispersed by refraction through the prism P, and focused in the plane of the exit slit S2 by a second reflection from M3. A narrow spectral region of the dispersed radiation passes the exit slit and is focused by the ellipsoidal mirror M7 onto the detector D, which converts the radiant energy into an electrical signal. Since the beam has been chopped at constant frequency by a rotating mechanical chopper C, this signal is an alternating current that is amplified by the lock-in amplifier A, controlling the pen of the chart recorder R. To scan the spectrum, M4 is rotated by the drive mechanism DM, which also drives the recorder. Successive frequencies are thus moved across the exit slit, producing a record of signal intensity as a function of mirror position; with a proper mechanical linkage, this record is made linear in wavelength or wave number. The same arrangement can be used with a diffraction grating as the dispersive element; the prism is removed and mirror M4 is replaced by the grating.

In the near-infrared, quartz prisms are used, and in the mid-infrared, alkali-metal halide or calcium fluoride (CaF2) prisms, but no prism material is suitable beyond about 50 μm. Diffraction gratings can be used in all regions with the advantage, for equivalent optical configurations, of significantly higher resolving power than prisms. Prism instruments have resolutions of little better than 1 cm-1 near wavelengths of maximum dispersion, and much poorer than this elsewhere. Grating resolution can be several tenths of a reciprocal centimeter for commercial spectrometers; some specially built instruments can resolve a few hundredths of a reciprocal centimeter. In most laboratories these instruments are being replaced by other techniques, although inexpensive double-beam grating spectrometers are still manufactured. See Diffraction grating, Optical prism, Resolving power (optics)

In a Michelson interferometer, light from the source strikes a thin, partially reflecting beam splitter at an angle of 45° and is divided into two beams that are returned by mirrors and recombined at the beam splitter. The intensity of the recombined and interfering beams, recorded as a function of the optical path difference (or retardation) as one mirror is moved, yields an interferogram. From this, the desired spectrum (that is, the source intensity as a function of wave number) can be recovered by the mathematical procedure known as a Fourier transform. See Interferometry

Fourier-transform spectroscopy offers several advantages over dispersive methods; these are especially important for effective use of the limited radiant power available from most infrared sources. Whereas a spectrometer samples only one small frequency range at any given instant and must scan these frequencies sequentially to produce a spectrum, an interferometer processes information from all frequencies simultaneously (multiplex or Fellgett advantage). Furthermore, an interferometer passes a much greater light flux for a given resolving power than a spectrometer, which can accept only a very limited solid angle of source radiation because of the narrow slits required (throughput or Jacquinot advantage). These advantages can be translated into improvements of orders of magnitude in any one of the three interrelated important parameters of resolution, signal-to-noise ratio, and scan time. Another advantage is that the mirror movement is monitored to high precision with a fixed-frequency laser, so that the wave-number scale of the transformed spectrum is highly accurate compared with spectrometer readings.

Commercial Fourier-transform spectrometers are marketed with resolutions from a few reciprocal centimeters for routine qualitative analyses to research instruments that can resolve better than 0.002 cm-1. Typically, they operate from 4000 to 400 cm-1 on one beam splitter such as germanium-coated potassium bromide (KBr); this range can be extended broadly in either direction with different beam-splitter materials. For the far-infrared, Mylar films in various thicknesses are used. These instruments are controlled by microprocessors and include a digital computer to handle the Fourier transform. This computing power allows data manipulation such as repetitive scanning and signal averaging; background subtraction; spectral smoothing, fitting, and scaling; and searching digitized spectral libraries and databases to identify unknowns. Although backgrounds can be subtracted with software, some Fourier-transform instruments are designed for true optical double-beam operation. Many offer rapid-scan capability for the study of short-lived species and can be adapted to recording Fourier-transform Raman spectra. See Raman effect

Infrared spectra are usually plotted as percent transmittance T or absorbance A on a scale linear in wave number &ngr; (less commonly, in wavelength λ). Transmittance is the ratio of the intensity of radiation transmitted by the sample (I) to that incident on the sample (I0), expressed as a percentage, so that T = 100I/I0.

Infrared spectra are ideal for identifying chemical compounds because every molecule [except homonuclear diatomics such as nitrogen (N2), oxygen (O2), and chlorine (Cl2)] has an infrared spectrum. Since the vibrational frequencies depend upon the masses of the constituent atoms and the strengths and geometry of the chemical bonds, the spectrum of every molecule is unique (except for optical isomers). Pure unknowns can thus be identified by comparing their spectra with recorded spectra; catalogs are available in digitized versions, and searches can be made rapidly by computer.

Simple mixtures can be identified with the help of computer software that subtracts the spectrum of a pure compound from that of the unknown mixture. More complex mixtures may require fractionation first. This has led to the development of combinations of analytical techniques, such as gas chromatography used together with Fourier-transform infrared spectroscopy; instruments that combine these functions are available commercially.

Many functional groups have characteristic infrared frequencies that are relatively independent of the molecular environment. Often, specific conclusions can be drawn from frequencies, and it may be possible to identify even a new compound from its spectrum. Group frequencies are most useful above about 1500 cm-1; below this the absorptions are due to, or are influenced more by, the skeletal vibrations of the molecule. This is the “fingerprint” region, where even similar molecules may have quite different spectra.

Many details of molecular structure and dynamics can be extracted from an infrared spectrum, especially for light molecules that can be examined in the gas phase and therefore exhibit rotational structure. 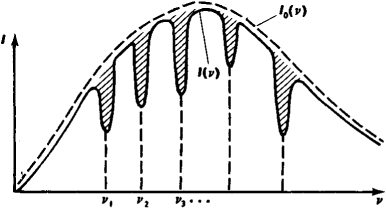 Figure 1. Relationship between the intensity I0(v) of incident radiation and the intensity l(v) of radiation that has passed through a substance: V1, V2, V3, … are natural frequencies of the substance; the shaded areas are absorption bands

In practice an IR absorption spectrum is usually represented graphically in the form of the dependence on frequency v or wavelength λ of a number of quantities that characterize the absorbing substance: the transmission coefficient T(v) = I(v)/I0(v); the absorption coefficient A(v) = [I0(v) − I(v]) = 1 − T(v); and the optical density D(v) = In [l/T(v)] = к(V)Cl, where к(V) is the index of absorption, c is the concentration of the absorbing substance, and l is the thickness of the absorbing layer of the substance. Since D(v) is proportional to к(V) and c, it is usually used for quantitative analysis on the basis of absorption spectra.

The primary characteristics of an IR absorption spectrum— the number of absorption bands in the spectrum, their location as determined by the frequency λ or the wavelength X, the width and shape of the bands, and the extent of absorption—are determined by the nature (the structure and chemical composition) of the absorbing substance and also depend on the state of aggregation of the substance, the temperature, and the pressure. The study of vibration-rotation and purely rotation spectra by the methods of infrared spectroscopy makes possible the determination of the structure, chemical composition, and moments of inertia of the molecules, as well as the magnitudes of the forces acting between atoms within the molecule. Because of the unambiguous relationship between the structure of a molecule and its molecular spectrum, infrared spectroscopy is used extensively for qualitative and quantitative analysis of mixtures of various substances (such as motor fuel). Changes in the parameters of IR spectra (shifting of absorption bands, or a change in their width, shape or extent of absorption) that occur upon transition from one state of aggregation to another, upon dissolution, or upon a change in temperature and pressure make it possible to assess the magnitude and character of intermolecular interactions.

Infrared spectroscopy is used in the study of the structure of semiconductors, polymers, biological entities, and living cells. High-speed spectrometers make it possible to obtain absorption spectra in fractions of a second and are used in the study of rapidly transpiring chemical reactions. The absorption spectra of very small objects, which are of interest in biology and mineralogy, can be obtained by means of special microscopic mirror attachments. Infrared spectroscopy plays a major role in the creation and study of molecular optical quantum generators whose radiation lies in the infrared region of the spectrum. The near and middle regions of the IR spectrum are studied most widely by the methods of infrared spectroscopy. A large number of diverse (primarily dual-beam) spectrometers are manufactured for this purpose. The remote IR region has been covered somewhat less thoroughly, but the study of the IR spectra in this region is also of great interest, since the spectra of the vibration frequencies of the crystal lattices of semiconductors and of intermolecular vibrations, in addition to the purely rotation spectra of molecules, lie there.

[¦in·frə¦red spek′träs·kə·pē]
(spectroscopy)
The study of the properties of material systems by means of their interaction with infrared radiation; ordinarily the radiation is dispersed into a spectrum after passing through the material.
McGraw-Hill Dictionary of Scientific & Technical Terms, 6E, Copyright © 2003 by The McGraw-Hill Companies, Inc.