a type of passive direction finding whereby the direction of an object is determined on the basis of the object’s own thermal radiation.

Infrared (IR) direction finding is carried out with IR directionfinding devices or systems. An IR direction-finding device usually consists of (see Figure 1) an optical system that collects the thermal IR radiation and concentrates it on a radiation detector, a scanning system that changes the position of the optical system’s axis in accordance with a certain law, an amplifier for the electric signals arriving from the radiation detector, and a display unit. The scanning system controls the scanning by the optical system of the air, outer space, the ground, or the sea surface. The amplified electric signals are fed to the control electrode of the display unit’s cathode-ray tube (CRT). The position of the optical system’s axis and the motion of the CRT beam change synchronously in accordance with a given law. When radiation from an object is incident on the detector, a spot is illuminated on the display screen; the angular coordinates of the object in question are determined from the position of the spot by using markings on the CRT screen. 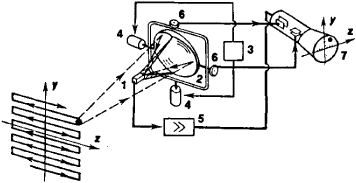 IR direction finding is used in marine, air, and space navigation, as well as in IR mapping of terrain. It is also used by the military to detect aircraft, ships, tanks, and similar objects on the basis of the radiation from their engine exhausts.