[in′jek·tər]
(electronics)
An electrode through which charge carriers (holes or electrons) are forced to enter the high-field region in a spacistor.
(mechanical engineering)
An apparatus containing a nozzle in an actuating fluid which is accelerated and thus entrains a second fluid, so delivering the mixture against a pressure in excess of the actuating fluid.
A plug with a valved nozzle through which fuel is metered to the combustion chambers in diesel- or full-injection engines.
A jet through which feedwater is injected into a boiler, or fuel is injected into a combustion chamber.
McGraw-Hill Dictionary of Scientific & Technical Terms, 6E, Copyright © 2003 by The McGraw-Hill Companies, Inc.
The following article is from The Great Soviet Encyclopedia (1979). It might be outdated or ideologically biased.

a jet pump used to compress gases and vapors and to force liquids into various devices and reservoirs. Injectors are used in locomotives and locomobiles, as well as in small boiler installations (see Figure 1) to supply feed water to steam generators. The advantages of injectors are the absence of moving parts and the simplicity of operation. 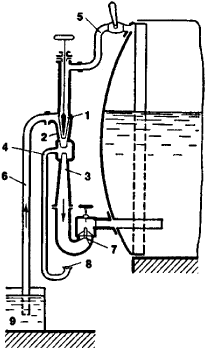 The operation of injectors is based on the transformation of the kinetic energy of a steam jet into the potential energy of water. Three cones are located coaxially in the common chamber of an injector. Steam is conveyed through the steam duct into the steam cone. The steam develops a high velocity in the outlet of the cone and carries with it the water supplied through the duct from the tank. The resulting mixture of water and condensing steam is driven into the water (condensation) cone and then into the injection cone, and from there through the check valve into the steam generator. Since the injection cone widens, the velocity of water decreases in it, and the pressure increases and becomes sufficiently high to overcome the pressure within the steam generator and to inject water into the generator. The excess water formed at the start of the injection cycle is expelled through the valve of the overflow pipe. The temperature of water entering the injector should not exceed 40°C, and the suction lift should not exceed 2.5 m. Injectors may be installed either vertically or horizontally. Injectors designed for drawing off gases, vapors, or liquids are called ejectors.

a device used to atomize and inject liquids. The liquid is delivered under pressure or by means of compressed gas or steam and is injected either continuously or intermittently. Continuous-flow injection is used, for example, in furnaces, gas-turbine and jet engines, and blowtorches; fuel is injected intermittently in, for example, diesel engines.

In some injectors, steam or gas flowing from the atomizer together with the liquid is used for atomization (Figure l, f). A spray cone with a discharge of rotating liquid has the greatest angle of taper (up to 180°) at the nozzle tip; jet injectors with the liquid flowing from a cylindrical nozzle have the smallest angle of taper (10°–20°) at the nozzle tip. An injector may have a valve, for example, a needle valve ([7] in Figure l, d). Such a valve is used to vary the amount of material delivered and to begin and end the injection. The valve is controlled by hand, by the pressure of the delivered liquid, or by automatic devices.

Injectors may be used to atomize water for controlling combustion and for regulating the moisture content of air or soil and to spray, for example, agrochemicals and fertilizer solutions.

Devices that are similar to injectors but used for the atomization of gaseous or pulverized solid fuel are called burners.

Simplex fuel injector.
A device to introduce, meter, and atomize the flow of fuel into the air flowing into a combustion chamber. The fuel is propelled into the combustion chamber under pressure other than atmospheric.
An Illustrated Dictionary of Aviation Copyright © 2005 by The McGraw-Hill Companies, Inc. All rights reserved

Feedback
Flashcards & Bookmarks ?
Please log in or register to use Flashcards and Bookmarks. You can also log in with
Flashcards ?
My bookmarks ?
+ Add current page to bookmarks
Mentioned in ?
References in periodicals archive ?
INJ PoE Injectors comply with the IEEE 802.3bt (Hi-PoE) standard and are backward compatible with IEEE802.3af/at (PoE and PoE).
Perle Launches DIN Rail Hi-PoE Injectors
Each injector and its components are 100 percent tested and inspected for optimum quality, performance and function.
Mack Offers Six Reasons To Choose REMACK Injector Kits
The analyzed CR injection system consists of a rotary pump equipped with a fuel metering valve (FMV) [20], a 20 [cm.sup.3] rail featuring both a pressure control valve (PCV) and a pressure sensor, 200 mm long injector supply pipes with an internal diameter of 3 mm and four piezoelectric injectors.
Direct Versus Indirect Acting Piezoelectric CR Injectors: Comparison of Hydraulic Performance, Pollutant Emissions, Combustion Noise, and Fuel Consumption
A similar problem was previously reported in studies conducted with EpiPen (8, 9) and the manufacturer redesigned the auto injector in 2011.
Comparison of practical application steps of the previously used adrenaline auto injector in Turkey (EpiPen) and the currently available adrenaline auto injector (Penepin): a multi-center study
In the first phase of the study, engine tests were run with and without detergent additives to observe the effect on injector tip deposit formation and particulate emissions.
Injector Fouling and Its Impact on Engine Emissions and Spray Characteristics in Gasoline Direct Injection Engines
Another innovation from Andritz Perfojet at that time was the concept of putting a cartridge filter (police filter) inside the injector as a final guardian of water quality.
Perfecting the spunlace process: evolution of Andritz injector technology and the development of neXjet
The essence of test stand operation is to simulate the engine control module that originally controls the frequency and time of injector opening through own control unit based on a microcontroller.
Operational assessment of selected gasoline and LPG vapour injector dosage regularity/Benzino ir suskystintu duju garu dozavimo reguliarumo purkstuku operacinis vertinimas
The injector was made by Directed Manufacturing Inc., of Austin, Texas, but NASA owns the injector design.
NASA's 3-D printed rocket engine part generates 20,000 pounds of thrust
The ECM generates the fueling signal in terms of electrical pulse to the injectors. The voltage waveform constitutes a high initial boost voltage to overcome the inertia of the injector mechanics, followed by a lower constant voltage which holds the injector nozzle to open position for the desired period of time.
Real time monitoring of diesel engine injector waveforms for accurate fuel metering and control
[ClickPress, Tue Sep 03 2019] The purpose of this comprehensive forecast report presented by Fact.MR is to elaborate the various market projections impacting the global prefilled auto injectors market during the period through 2017-2022.
Global Prefilled Auto Injectors Market Perceptions High-point Industrial Expansion in Coming Years,
M2 PRESSWIRE-August 28, 2019-: Wearable Injectors Market 2019 Leading Players, Future Trends, Company Overview, SWOT Analysis and Regional Insights Till 2023
Wearable Injectors Market 2019 Leading Players, Future Trends, Company Overview, SWOT Analysis and Regional Insights Till 2023