[′in·strə·mənt tranz‚fȯr·mər]
(electricity)
A transformer that transfers primary current, voltage, or phase values to the secondary circuit with sufficient accuracy to permit connecting an instrument to the secondary rather than the primary; used so only low currents or low voltages are brought to the instrument.
McGraw-Hill Dictionary of Scientific & Technical Terms, 6E, Copyright © 2003 by The McGraw-Hill Companies, Inc.
The following article is from The Great Soviet Encyclopedia (1979). It might be outdated or ideologically biased.

an electrical transformer in which the current or voltage being measured acts on the primary winding of the transformer; the secondary (step-down) winding is connected to measuring instruments and protective relays. Instrument transformers are used primarily in power switchboards and in high-voltage AC circuits to ensure safety in measuring current intensity, voltage, power, and energy. One of the terminals of the secondary winding is grounded, as a protective measure in cases of insulation breakdown on the high-voltage side. Instrument transformers make possible the measurement of various magnitudes of electrical quantities with devices whose range of measurement extends to 100 watts (W) and 5 amperes (A).

In an instrument potential transformer (Figure 1), the voltage U1 being measured is fed to the terminals of the primary winding; the winding W1 is connected in parallel with the load. A secondary voltage U2 is fed from the winding W2 to a voltmeter or to the voltage circuits of measuring instruments and protective relays. The accuracy of measurement is defined by a percentage error, which determines the accuracy of reproduction for the amplitude of the voltage being measured, and by the angle error in degrees. The angle error is equal to the angle between the vector of primary voltage and to the vector of secondary voltage, rotated by 180°; it determines the accuracy of phase reproduction. Most instrument voltage transformers for high voltages are manufactured in a sectionalized, oil-filled design.

For measurements of power in high-voltage circuits both current and voltage instrument transformers are required if a wattmeter is used (see Figure 3).

Figure 3. Connection diagram of a wattmeter in a single-phase high-voltage circuit across instrument current and potential transformers: (V) voltmeter, (A) ammeter, (W) wattmeter

Direct-current transformers of special design are used in high-voltage DC circuits or in circuits carrying direct current of great magnitude (Figure 4). The operation of such an instrument transformer is based on the saturation of a core made from a ferromagnetic material at low magnetic field intensities. As a result the average value of alternating current in the auxiliary winding becomes dependent on the direct current being measured. 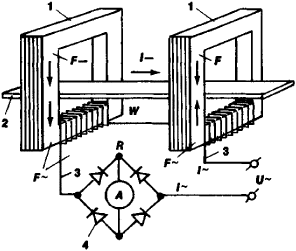 A device that serves as an input source of currents and voltages from an electric power system to instruments, relays, meters, and control devices. The basic design is that of a transformer with the primary winding connected to the power system, and the secondary winding to the sensing and measuring equipment. Data from these devices are necessary for the operation, control, and protection of the power system. The primary reason for setting up the instrument-transformer interface is to provide analog information at low voltage levels, insulated from the higher system voltages. The range of use is from 480 V through the maxima of the 765–1000-kV power systems. See Electric power systems, Transformer