stereoscopic motion pictures in which a three-dimensional image is created by the simultaneous projection onto a screen of many two-dimensional interrelated images (frames), rather than two images, as in dual-image stereoscopic motion pictures, although the viewer only sees two images at the time (one with the left eye and one with the right). The method was first proposed in 1962–63 by S. P. Ivanov, the Soviet inventor of stereoscopic motion pictures that can be viewed without special glasses, and was perfected in subsequent years. An experimental motion picture photographed using the integral technique and produced by N. V. Ekk was shown in 1965. The short Along the South Shore of the Crimea, which also was made by the integral method, was first shown in 1972 at the Oktiabr’ Theater in Moscow (producer and cameraman, N. I. Bol’shakov).

A standard single-lens camera with any lens is used in the simplest integral stereoscopic motion-picture photography with 8-, 16-, or 35-mm film. Only the frame, which restricts the field of vision of the viewfinder according to the type of stereoscopic screen selected, is changed. A particular feature of this photographic technique is that the camera is not mounted in the usual manner but rather rotates about the optical axis of the lens to an angle of 90° to ensure horizontal film advance necessary for projection and moves along the horizontal plane around a central object in the composition (Figure 1). The rate of camera movement can be calculated according to the formula v = L ⋅ K/10 ⋅ f’c, where v is the speed of movement of the camera (in mm/sec), L is the distance to the central object in the composition (in mm), K is the frame frequency (in frames per sec), and f’c is the coupled focal distance (in mm). This formula can be used to compile tables for the most typical or frequent cases in photography. Deviations by a factor of 2–3 from the parameters given in the formula are permissible during filming. The simplest method of monitoring for the technique requires that the movement of the nearest and farthest objects visible in the viewfinder (relative to the fixed central object) from one edge of the frame to the other take place in not less than 2 or more than 10 seconds. 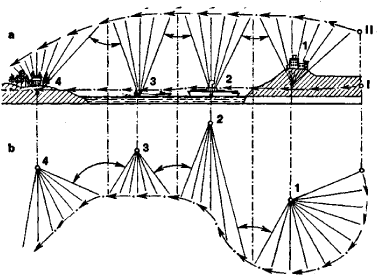 Figure 1. Diagram of integral motion-picture photography: (a) vertical, (b) lateral; (1), (2), (3), and (4) central objects in the composition. The movement of the camera during lateral (I) and vertical (II) photography is shown by the arrows; the rapid shift from one viewing position (central object) to the other is shown by the two-headed arrows.

The film advances horizontally at the standard frame frequency (24 frames per sec) past several interconnected lenses during projection onto the screen. The number of lenses used is determined by the optical parameters of the screen. For example, five to ten lenses are sufficient for projection onto a screen with a perspective lens raster (Figure 2). In this case, five to ten elementary interrelated focal zones, which as a whole make up an integral zone for stereoscopic viewing, are necessary for any seat in the auditorium. Up to 50 integral zones or 400–500 elementary focal zones are formed by the screen. This number of zones ensures normal viewing conditions for the spectators. Thus, the stereoscopic effect is not lost when the viewer moves to the right or left, which unavoidably occurs in the case of dual-image stereoscopic projection without special viewing glasses; it actually is emphasized more strongly because of the natural shift of nearer objects in relation to more remote objects—that is, fully corresponding to what is observed in actuality. 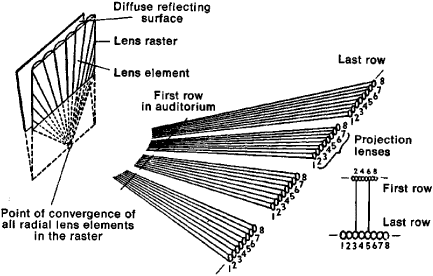 Figure 2. Diagram of formation of integral focal zones using a screen with a perspective lens raster

However, the technique of producing integral stereoscopic motion pictures examined above has certain disadvantages. The most rapidly moving objects are photographed with a greater time parallax, which appears as a fragmentation of the images of moving objects during any type of projection. In addition, marked distortion in the shape of objects and in their spatial position is observed during stereoscopic projection. To avoid this phenomenon, two more complex techniques of producing integral stereoscopic motion pictures have been proposed: (1) an increase in frame frequency by a factor of 2–4 during photography and projection, and (2) photography and simultaneous projection of a series of eight to nine frames at the previous frame frequency. In the latter technique, perforated aerial photographic film 190 mm wide, with a series of nine separate interconnected frames measuring 19 X 19 mm each arranged transversely (relative to the movement of the film), is used.