a system of pneumatic equipment for automating general industrial functions, which consists of separate functional units having unified input and output parameters. The list of units is so arranged that by using them in certain combinations and quantities it is possible to make up from a relatively small set of units automatic control and regulation systems for production processes differing in complexity and purpose.

Included in an integrated unified system are units that regulate, or control, according to proportional and proportional-integral laws; units that regulate the ratio of two parameters and the ratio of two parameters with a correction according to a third parameter; prediction units to introduce actions in accord with a derivative; units for adding, multiplying, squaring, and extracting a square root; and monitoring instruments that record and indicate. For joint operation with electrical instruments, an integrated unified system is supplied with electropneumatic and pneumoelectric converters.

The control units of the system can operate with any transducer having a pneumatic output and with the mass-produced control units that have pneumatic diaphragm actuator mechanisms. The input and output parameters adopted for the system are the standard compressed air pressure ranges for autopneumatics—that is, 0.02 to 0.1 meganewtons (MN) per m2 (0.2 to 1 kg/cm2). The units and instruments of the system also have unified constructions: they contain unified subassemblies, parts, and coupling hardware. The system’s units and instruments are fireproof and explosion-proof, reliable in service, and simple to maintain. They are used to automate production processes in such branches of industry as chemistry, oil refining, oil production, heat-power engineering, the gas industry, and the food industry.

The majority of the units (other than the monitoring instruments) are cylindrical in shape and consist of a set of discs separated by flexible diaphragms made of rubberized linen. On the sides of the units there are mounted adjustment elements and also support and coupling devices. The monitoring instruments are sylphon manometers having measuring ranges from 0.02 to 0.1 MN/m2 (0.2 to 1 kg/cm2). Several modifications are produced: a simple type for recording and indicating a single parameter and more complicated types for recording and indicating the value of the controlled parameter and for indicating the assigned value of the controlled parameter and the position of the actuating mechanism. 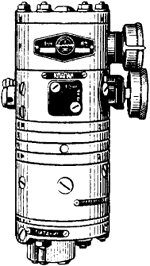 Figure 1 is an overall view of a control unit for an integrated unified system which has the maximum number of unified subassemblies and parts. Most units are built like this. (See Figure 2 for its block diagram.) The operation of the unit is based on the balance of forces exerted on the diaphragms by the pressure of compressed air supplied to the chambers of the unit—that is, to the spaces formed by the walls of the discs and the diaphragms. The unit is an isodromic (proportional-integral) regulator with an adjustment of the throttling range from 10 to 250 percent and of the isodromic time from 3 sec to 100 min. The unit comprises the following subassemblies: a power amplifier—chambers (A), (B), (C), and (D); a comparison element—chambers (F) and (G); feedback—chambers (E) and (H); the isodromic element—chambers (I) and (J); and a cutoff relay—chambers (K), (L), and (M). In Figure 2, N represents pulse pressure. Compressed air is fed to the unit from the supply line, from a measuring unit (transducer), and from a setting mechanism. When the controlled parameter deviates from the assigned value, a difference develops between the air pressures at the inputs to the unit so that the balance of forces is disturbed on the diaphragms (1, 2, and 3), which are fastened to a common rod (4). Depending on the direction of the resultant force, the diaphragm subassembly is moved up or down. Thereupon a shutter (5) at the lower end of the rod (4) opens or closes a nozzle (6); as a result, the pressure of the compressed air that passes from the supply unit through a fixed resistance will be changed.

The change in this pressure is amplified by the amplifier and then enters a channel (7) and the output line of the unit, which is connected with the line of the actuator mechanism. Negative feedback is realized by feeding compressed air into a chamber (E). The gain of the regulator (the throttling range) is set by adjusting a valve (8) which regulates the admission of compressed air from a channel (7) into the positive feedback chamber (H). The isodromic element consists of a closed chamber (J) with a valve (11) and a flow-through chamber (1), in which the pressure of the compressed air always 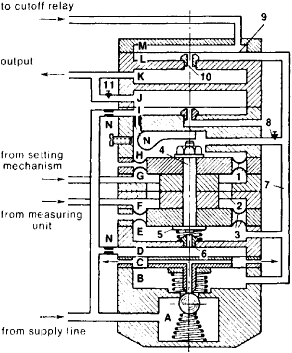 follows the pressure in a chamber (J). The isodromic time is set by the degree of opening of a valve (11), which controls the time to fill a chamber (J). Valves (8) and (11) are needle valves. Shifting from automatic to manual control is done by a cutoff relay. When air is fed from the supply to a chamber (M), a diaphragm (9) closes a nozzle (10), thus disconnecting the output line of the regulator from the line to the actuator mechanism.