intercolumniation (ĭnˌtərkəlŭmˌnēāˈshən), in classical architecture, the clear space between the edges of two adjacent columns, as measured at the lower portion of their shafts. Vitruvius compiled standard intercolumniations for the three orders, expressed in terms of the column diameter. In the great works of Greek architecture, spacings frequently varied within a single colonnade. Renaissance architects employed a new type of intercolumniation with the use of columns in pairs, those of each pair almost touching.
The Columbia Electronic Encyclopedia™ Copyright © 2022, Columbia University Press. Licensed from Columbia University Press. All rights reserved.

The clear distance between two columns, measured at the lower part of the shafts, according to a system of proportions in Classical architecture, based on the diameter of the column as the governing module.
Illustrated Dictionary of Architecture Copyright © 2012, 2002, 1998 by The McGraw-Hill Companies, Inc. All rights reserved 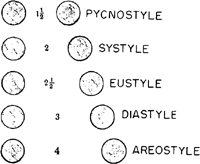 Diagram of intercolumniation
1. The clear space between two adjacent columns, usually measured at the lower parts of the shafts.
2. The system of spacing
McGraw-Hill Dictionary of Architecture and Construction. Copyright © 2003 by McGraw-Hill Companies, Inc.