(two-way loudspeaker communication), a type of internal wire communication for the rapid transmission of information, calls, orders, reports, and messages. By using specially laid internal communication lines that restrict the number of subscribers, an intercommunication system can rapidly connect, for example, a plant manager with a shop superintendent or a division chief with laboratory heads.

A distinction is made between simplex and duplex intercommunication systems. In a simplex system, information is transmitted over the line in only one direction—that is, one party speaks, and the other only listens. The simplest such system (Figure 1,a) consists of a microphone, an amplifier, a loudspeaker, and a wire communication line. If a loudspeaker is installed at the transmitting end and a microphone at the receiving end, then it becomes possible to converse in either direction by switching the amplifier input and output. 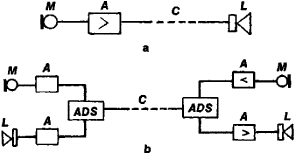 The simplest duplex intercommunication system (Figure l,b) consists of two receiving-transmitting devices that include microphones with transmitting amplifiers, loudspeakers with receiving amplifiers, and automatic switching apparatus for the direction of communication (or differentiating apparatus). In this case both parties are able to speak and listen at the same time, in the same way as with an ordinary telephone. Intercommunication systems are used in government and public establishments, in research institutes and design offices, in factory administrations, and in production sectors with a high noise level.

A communication system within a building or group of buildings with a microphone for speaking, and a loudspeaker for listening, at each of two or more locations.
McGraw-Hill Dictionary of Architecture and Construction. Copyright © 2003 by McGraw-Hill Companies, Inc.