The Michelson interferometer (Fig. 1) is based on division of amplitude. Light from an extended source S is incident on a partially reflecting plate (beam splitter) P1. The light transmitted through P1 reflects off mirror M1 back to plate P1. The light which is reflected proceeds to M2 which reflects it back to P1. At P1, the two waves are again partially reflected and partially transmitted, and a portion of each wave proceeds to the receiver R, which may be a screen, a photocell, or a human eye. Depending on the difference between the distances from the beam splitter to the mirrors M1 and M2, the two beams will interfere constructively or destructively. Plate P2 compensates for the thickness of P1. 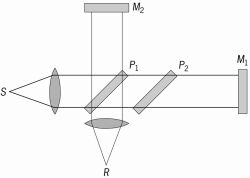 The function of the beam splitter is to superimpose (image) one mirror onto the other. When the mirrors' images are completely parallel, the interference fringes appear circular. If the mirrors are slightly inclined about a vertical axis, vertical fringes are formed across the field of view. These fringes can be formed in white light if the path difference in part of the field of view is made zero. Just as in other interference experiments, only a few fringes will appear in white light.

The Twyman-Green interferometer can be used to test a flat mirror. In this case, M1 in Fig. 1 is a reference surface and M2 is the flat surface being tested. If the test surface is perfectly flat, then straight, equally spaced fringes are obtained. Departure from the straight, equally spaced condition shows directly how the surface differs from being perfectly flat. A height change of half a wavelength will cause an optical path change of one wavelength and a deviation from fringe straightness of one fringe. Thus, the fringes give surface height information, just as a topographical map gives height or contour information.

The Mach-Zehnder interferometer (Fig. 2) is a variation of the Michelson interferometer and, like the Michelson interferometer, depends on amplitude splitting of the wavefront. Light enters the instrument and is reflected and transmitted by the semitransparent mirror M1. The reflected portion proceeds to M3, where it is reflected through the cell C2 to the semitransparent mirror M4. Here it combines with the light transmitted by M1 to produce interference. The light transmitted by M1 passes through a cell C1, similar to C2, and is used to compensate for the windows of C2. The major application of this instrument is in studying airflow around models of aircraft, missiles, or projectiles. 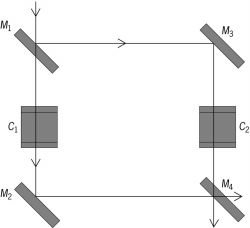 A Michelson stellar interferometer can be used to measure the diameter of stars which are as small as 0.01 second of arc. This task is impossible with a ground-based optical telescope since the atmosphere limits the resolution of the largest telescope to not much better than 1 second of arc.

A wave recorded in a hologram is effectively stored for future reconstruction and use. Holographic interferometry is concerned with the formation and interpretation of the fringe pattern which appears when a wave, generated at some earlier time and stored in a hologram, is later reconstructed and caused to interfere with a comparison wave. It is the storage or time-delay aspect which gives the holographic method a unique advantage over conventional optical interferometry. See Holography

A random intensity distribution, called a speckle pattern, is generated when light from a highly coherent source, such as a laser, is scattered by a rough surface. The use of speckle patterns in the study of object displacements, vibration, and distortion is becoming of more importance in the nondestructive testing of mechanical components. See Speckle

[‚in·tə·fə′räm·ə·trē]
(optics)
The design and use of optical inferometers; uses include precise measurement of wavelength, measurement of very small distances and thicknesses, study of hyperfine structure of spectral lines, precise measurement of indices of refraction, and determination of separations of binary stars and diameters of very large stars.
McGraw-Hill Dictionary of Scientific & Technical Terms, 6E, Copyright © 2003 by The McGraw-Hill Companies, Inc.