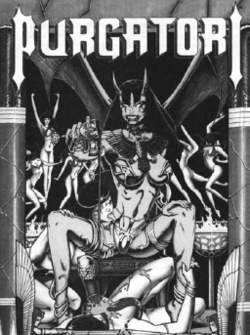 Cover art from the comic Purgatori.

International Vampire was one of the higher quality periodicals of the 1990s published for fans of vampires. It was founded in 1991 by its editor, Rob Brautigam, a resident of Amsterdam, Netherlands. Each issue contained well-researched articles of vampire history and folklore, notices of various fan organizations and periodicals, and book reviews. After some six years, it was discontinued. Several people interested in vampires established sites on the Internet in the early 1990s and as the decade came to a close the established sites were numbered in the thousands. For the vampire enthusiast, they provide constant entertainment and are a source of vast amounts of information. But, given the amateur nature of most sites, like fanzines and fan clubs, they have a tendency to be ephemeral, quite surprising given the cost and time needed to maintain a home page. However, on any given day, one can get on the web and, using any of the major search engines, immediately find more sites than they can absorb in a sitting.

For both the neophyte and the experienced Internet user, a very good place to start is Candy Cosner’s Vampire Junction site (http://www.afn.org/~vampires/links.html). Cosner, a longtime vampire fan, started Vampire Junction as a fanzine in the early 1990s and gradually made the transition from printed to electronic media in the middle of the decade. Even though some areas on the site are devoted to Cosner’s special interests (poetry, short fiction), she makes a real contribution with the more than 600 “Links to All Things Vampiric,” giving leads to almost any area of vampire interest. The sites for chat rooms, fan clubs, or specific topics are listed alphabetically to facilitate locating them. To help narrow down the bewildering number of choices, she has called attention to the “better” sites and warns people when they are about to enter an exclusively commercial site.

The Vampire Junction has also pulled together the sites related to the more popular specialized interests—Anne Rice, Buffy the Vampire Slayer, Forever Knight, Vampire: The Masquerade, Dark Shadows, Vampirella, and vampire literature/writers—so one does not have to go searching through the entire list to find their favorite topic or miss sites because their name doesn’t reveal their content.

A second general interest vampire site is Pathway to Darkness (http://www.pathwaytodarkness.com/). Along with sections containing interactive opportunities, selections of vampire fiction, and reviews of vampire movies and games, this site has a direct link to “Count Duckula’s Vampire Films” at http://www.uncc.edu/~ltrobert/vampfilm.htm, the best list of vampire films currently existing on the Internet. Count Duckula is further cross-referenced to the Internet Movie Database (www.imdb.com), which offers additional information about any particular film.

Amid the hundreds of vampire films, the Hammer movies have inspired the most noticeable community of fans. Hammer Films has an official web page (www.hammerfilms.com), but, Greg Turnbull’s Hammer Horror (http://www.firstlevel.com/homepages/hammer/) is another excellent source of information. The site is especially directed to collectors but also has space for fans to chat about Hammer and keep up with the stars of the movies, especially the beautiful cadre of Hammer women. One of Hammer’s biggest stars, Ingrid Pitt, has her own fan club with associated internet presence, The Pitt of Horror (www.pittofhorror.com).

The oldest, strongest and most loyal fans of a vampire television show are the devotees of Dark Shadows, which has an extensive Internet presence. Few pages provide a better starting point for exploring the cyber world of Dark Shadows than the Dark Shadows Frequently Asked Questions Page (http://members.aol.com/tchoate1/ds/faq.htm). There are pictures and facts, but mostly there are links that cover publications and collectibles, the show’s stars, videos of the television show, and fan news.

For Buffy, one could do worse than begin at the unofficial Buffy the Vampire Slayer site (http://www.geocities.com/TelevisionCity/Set/9329/index.html).

It contains pictures, episode summaries (and even complete scripts of shows), interactive activities, those ever-present rumors to be dispelled, and a host of additional information on the top vampire television show of the 1990s. Links to the other Buffy sites are divided between the very best “banner sites” and all the rest.

A similar site for Forever Knight is the Internet Traveler’s Guide to Forever Knight (http://www.geocities.com/Hollywood/8125/). It offers not only the requisite pictures, episode summaries and information for trivia buffs, but a set of links to even more Forever Knight sites. Topping the list of topics for vampire buffs are the Anne Rice sites that include everything from the fan clubs of the stars of Interview with the Vampire to travel guides for New Orleans. Here is one area in which the official site is very well done and one cannot go wrong starting with The Anne Rice Official Site (www.anne-rice.inter.net/). Rice has participated in its preparation and keeps her many fans updated on her writing projects as well as answering questions put to her. There is also an archive of past issues of her newsletter. The one drawback is the lack of links to unofficial sites, but that single oversight is ably handled by Dracula’s Daughter, one site that does not give away its content with its name; (http://users. aol.com/mishian/DD/DD.html). It vies with Rice’s site in attempting to post the latest news. From it one can find their way to the additional fan sites. Dracula’s Daughter is particularly useful for collectors of Rice’s books (which have now been reproduced in a variety of media).

For Vampire: The Masquerade, start with The Vampire Archive (http://www.monterey.edu/staff/StoneRob/world/Vampire/). It is one of the larger sites with comprehensive coverage of the game and its variations. One can learn about the intricate mythology underlying the game and survey the vast amount literature that has been produced to enhance play.

Vampirella is the hottest vampire in the comic book world and Scott’s page (http://www.abs.net/~scor pion/legion/htmls/legion.html) is among the best of the fan sites. It risks being buried among several hundred sites devoted entirely to reproducing one or a few Vampirella comic book covers or Vampirella trading cards. Scott’s site covers the recent Harris Comics issues, the Scarlet Legion Fan Club, the Vampirella film, as well as including liberal amounts of Vampirella art. The other hot comic book vampires, Purgatori and Chastity, are from Chaos! Comics (www.chaoscomics.com/).

To research Dracula, the world’s best-known vampire, go to the interrelated sites of gothic scholar Elizabeth Miller (www.ucs.mun.ca/~emiller/) and the Canadian Chapter of the Transylvanian Society of Dracula, which she heads (www.ucs.mun.ca/~emiller/tsd.htm). Segments of the sites focus on serious consideration of Dracula and vampire studies and other parts take a more lighthearted approach to the subject. From these sites one can look up Web pages on Transylvania, the novel Dracula, and some of the organizations with which TSD has close ties, such as the Dracula Society in England, Transylvania Press, and Desert Island Books. But also look for references to Vampire Legends of Rhode Island, Stone & Wing: Bat Motif Jewelry, the Haunted Bookshop (Australia), the Ooga Booga Page, another very comprehensive site, Vampyres Only (http://www.vampyres-only.com//) and Evil Eyes (in French). Also, for a full text of the novel, go to http://www.literature.org/Works/Bram-Stoker/dracula/.

Gothic fiction forms a large area of interest for vampire fans. Two sites come to the fore in providing information about vampire novels and their authors, Dark Echo (www.darkecho.com) and the Dark Side of the Net (www.gothic.com). The latter also carries links to the whole gothic world, including vampire comic books. Horror Net (www.horrornet.com) carries an extensive listing of home pages and email addresses of horror writers (including many who are best known for their vampire novels).

For almost all of the sites mentioned above, another almost equally valuable Internet address could have been given, but these sites are easily accessed and serve as open doors to surfing the Internet. From them you can explore the subject of vampires from almost any angle and perspective. You can look at pictures, download fiction, buy a wide assortment of paraphernalia, and learn about vampire life. You also have the opportunity to chat endlessly with other people interested in vampires in general or your favorite vampire in particular, and more than a few people who claim to be vampires themselves. And every indication seems to suggest that in the near future the opportunities to learn about vampires and interact with others of like mind will only grow.

Feedback
Flashcards & Bookmarks ?
Please log in or register to use Flashcards and Bookmarks. You can also log in with
Flashcards ?
My bookmarks ?
+ Add current page to bookmarks
Mentioned in ?
References in periodicals archive ?
Craig Hooper, 46, first had the idea for what became the International Vampire Film and Arts Festival (IVFAF) when he was on a road trip with his son.
A TRIP TO GET YOUR TEETH INTO
When news hits, the Cullens try to reveal the truth of Renesmee's origin and ask a list of international vampire 'witnesses' to prove that the little girl is not a threat, or should the Volturi choose to be unreasonable, they will fight to the death.
Fang-tastic end!
So Morning is startled but flattered when he's chosen by the head of the International Vampire League to be the first vampire to out himself to humans, who the immortal vampires call "Lifers." He sees it as a chance to become the superhero he's always dreaming of becoming.
Meehl Brian. Suck it up