a method for determining the position of a point (a reference point in geodesy or a gun or target in artillery) by measuring the lengths of the segments connecting the point with certain given points or by measuring the angles between the directions of the segments. De-pending on the type of quantity measured, a distinction is made between linear and angular geodetic intersections.

To determine the position of a point K in space using a linear geodetic intersection, it is necessary to measure at least the lengths Si of the three segments that connect this point with the three points A, B, and C with given coordinates (Figure 1). Then the coordinates of the unknown 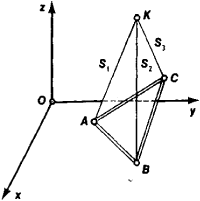 where i = 1, 2, 3 or A, B, C. If the unknown point lies on the surface of a reference ellipsoid or on a plane, the measurement of the lengths of the two segments that connect it to two known points is sufficient to determine its position by a linear geodetic intersection.

directions to the three assigned points A, B, and C (Figure 3). The position of the point is determined from the trigonometric relationships that link the measured angles and distances between the known points.

Various combinations of geodetic intersection and resection are also used in practical geodetic work. Here a number of quantities that is larger than necessary is measured. The position of the unknown point is determined from the corresponding equating calculations.