a part of a complex optical system that inverts the optical images of objects that were formed in an earlier part of the optical system. Inversion systems are used because in many cases it becomes necessary to obtain and view erect images of objects, whereas most objective lenses produce inverted images. Inversion systems are widely used in various kinds of optic tubes, such as binoculars and some types of microscopes, periscopes, and projectors.

Inversion systems can be of the prism type, lens type, or mirror type. In prism inversion systems, the most commonly used prism is a right-angle prism with mutually perpendicular edges, which is called a Porro prism. The light rays enter this prism perpendicular to one of the faces of the prism and undergo two total internal reflections from the other faces; the rays leave the prism in a direction opposite to the original direction of entry. The principle of total internal reflection is also used in some other components of inversion systems that are made of optical glass and have flat plane faces; such components are also called inversion prisms, although they are not always prisms in the strict geometric sense. Prism inversion systems make it possible to vary considerably the length of an optical system. Specifically, an inversion system that consists of two Porro prisms (Figure 1) significantly shortens the distance between the eyepiece and the objective lens in instruments intended for visual observations, such as binoculars. In this case, the image of the object is rotated, but its size is not changed. 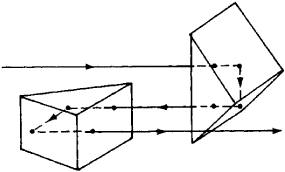 Inversion systems can also be made with fiber optical components provided these components are of a high enough quality to give the resolution required in the optical system.

Feedback
Flashcards & Bookmarks ?
Please log in or register to use Flashcards and Bookmarks. You can also log in with
Flashcards ?
My bookmarks ?
+ Add current page to bookmarks
Mentioned in ?
References in periodicals archive ?
(2016) support this hypothesis because when adding Siberian in situ measurements to their inversion system, the carbon uptake in Europe was enhanced while it decreased in the Eurasian boreal TransCom region.
Additionally, further analysis of the statistical hypotheses made in the satellite retrieval algorithms and those made in the inversion systems are needed (Chevallier 2015).
How much C[O.sub.2] is taken up by the European terrestrial biosphere?
"We had to buy some resistors, an AC inversion system and a charge control system."
Engineer Marines build new TACAN power supply
San Diego, CA, June 23, 2012 --(PR.com)-- Nu Tube is Nu Flow's inversion system. Nu Flow will offer calibration tube and inversion felt of all sizes, thicknesses and elasticity.
Nu Flow Expands Product Offering with Nu Main and Nu Tube
This is facilitated by the station's PV interconnection system, dual redundant grid tie inversion system and MV interconnection system.
Inverter for solar farms devised
This unique inversion system can be installed anywhere in the pipe.
LMK Enterprises
A pallet inversion system eliminates that manual process, and problems associated with it, most notably carpal tunnel syndrome of the hands and wrists from performing repetitive motions.
Flipping over injuries at a printing plant. (Application Reports: Packaging)
Much of the genetic variation in male size is determined by a very large inversion system on chromosome I (Butlin et al.
If pleiotropy is responsible, the female preference and male size must be determined by the same locus (or loci) within the [Alpha][Beta] inversion system. Alternatively, the female mating preference may be in linkage disequilibrium with the male trait, the two characters being determined by different loci associated with the inversion.
Genetic correlation between a female mating preference and the preferred male character in seaweed flies (Coelopa frigida)
ProLine does not plan to sell the air inversion system, says Taylor.
Air inversion CIPP increases productivity