[′ī‚än i‚mish·ən]
(physics)
The ejection of ions from the surface of a substance into the surrounding space.
McGraw-Hill Dictionary of Scientific & Technical Terms, 6E, Copyright © 2003 by The McGraw-Hill Companies, Inc.
The following article is from The Great Soviet Encyclopedia (1979). It might be outdated or ideologically biased.

the emission of positive and negative ions into a vacuum or gaseous medium by the surface of a solid or liquid (emitter). To leave the surface, an ion must have a sufficient energy to overcome the forces restraining it. The ion may acquire such energy as a result of heating (thermionic emission) or bombardment of the emitter, which in this case is called the target, by an ion beam (ion-ion emission), electrons (electron-ion emission), or photons (photodesorption). In all cases ion emission may take place as emission both of particles of the emitter itself and of impurities, which are inevitable in real materials.

Thermionic emission is used to produce ion beams in ion sources, to indicate weak molecular beams (for example, in quantum frequency standards), and for ionic implantation of admixtures into semiconductors. In physicochemical research thermionic emission is used to determine the ionization energy and electron affinity energy of atoms, molecules, and radicals; the heats of evaporation and desorption of ions and neutral particles; and the dissociation energy of molecules. 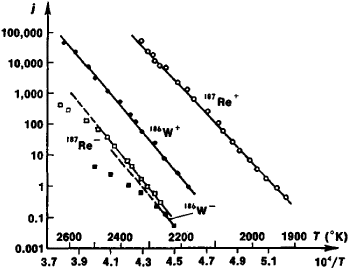 Figure 1. Dependence of the logarithm of ion current density on the emitter temperature T upon evaporation of tungsten (W) and rhenium (Re) in the form of positive and negative ions

If an emitter is located in an electric field that accelerates evaporating ions, the heat of evaporation of the ions Oi, decreases as the field intensity E near the surface of the emitter increases (the Schottky effect for ions); when T = const., this is accompanied by an increase in a, according to equation (1).

In strong fields (E ⋍ 108 volts per cm [V/cm]), ion emission takes place with high probability (a ≫ 1) at room temperature and lower. In this case ion emission is called field emission (autoionic emission or field evaporation). Fields of ~108V/cm are created, for example, at the surface of fine points with a radius of curvature of 100–1,000 angstroms. In such electric fields not only singly charged but also doubly charged ions may be emitted. Field-ion emission may be considered as the evaporation of ions through the potential barrier, which is lowered by the field. The ion current grows as the field E increases, and in weaker fields ions primarily from impurities escape.

Field-ion emission is used to prepare samples in field-ion and field-emission microscopes. To produce a sharp image by means of an ion projector an atomically smooth surface of the sample must be created. Field-ion emission smooths out the surface of a point, since the electric field is stronger near the edges and sharp projections, leading to preferential evaporation of ions from these points.

Photodesorption. The absorption of a photon of light may lead to the decay of a target molecule into ions or to the ionization of an atom or molecule. Some of the ions that arise in the process may leave the surface.

If the emitter is irradiated by an intensive light flux (a laser beam with a pulse power of ~ 108–109 W/cm2), then the emission from the target material of ions with charges of various multiplicity and even totally lacking electrons (for example, Co27+) is observed. In this case the highly ionized plasma that forms within the emitter upon vaporization of the substance is the ion source. 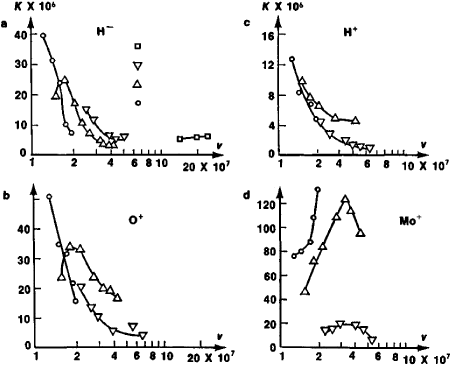 Feedback
Flashcards & Bookmarks ?
Please log in or register to use Flashcards and Bookmarks. You can also log in with
Flashcards ?
My bookmarks ?
+ Add current page to bookmarks
Mentioned in ?
References in periodicals archive ?
Investigation of photo-luminescence properties of complexes in THF, solid-state and PVK films shows that emission spectra contains characteristic [Eu.sup.3+] ion emission lines with the most intense transition at 612 nm.
Study of thermal and optical properties of dibenzoylmethane Eu(III) organic complexes
For example, aluminosilicates with a skeleton structure such as zeolites were earlier investigated as alkali metal ion emitters characterized by stable thermal ion emission currents [M.sup.+] (M is alkali metal) [4].
In this work, the [Al.sub.30]-pillared MM is investigated by a variant of the high temperature mass spectrometry allowing analyzing charged vapor species in thermal ion emission mode [9,10].
Thermal Emission of Alkali Metal Ions from [Al.sub.30]-Pillared Montmorillonite Studied by Mass Spectrometric Method
So, they brew Short Circuit Stout, Flip Switch IPA, Wheatstone Bridge (an American style wheat beer), Schottky Pumpkin Ale (an homage to Walter Schottky, who helped develop the theory of electron and ion emission phenomena), and Ampere Biere.
Art, science, and beer: the line from engineering to brewing is more direct than some may think
Enhancement of the Performance of Low-Efficiency HVAC Filter Due to Continuous Unipolar Ion Emission. Aerosol Science and Technology, 40: 11, 963-968.
Influence of filter fiber material on removal of ultrafine and submicron particles using carbon fiber ionizer-assisted intermediate air filters
Recently, there has been renewed interest in the use of polyatomic projectiles because they have been shown to increase the secondary ion emission yield without concurrent increase in damage to the solid.
Investigating polyatomic cluster bombardment of organic targets
It is possible that weak [Er.sup.3+] ion emission peaks were embedded in the signal from a strong, deep-level emission.
Synthesis, characterization, and photocatalysis of ZnO and Er-doped ZnO
Summary: TEHRAN (FNA)- The discovery of a dark ribbon of weak hydrogen ion emissions that encircles Jupiter has overturned previous thinking about the giant planet's magnetic equator.
Dark Ribbon and Jupiter's Magnetic Equator
Measurements of plasma temperature and electron density in laser-induced copper plasma by time-resolved spectroscopy of neutral atom & ion emissions, Pramana-journal of physics., 74(6): 983-993.
Investigation of intensity distribution by image analysis for DC discharge
Phase two encompassed a negative ion emissions test between Fusion IONZ and thirteen of their top competitors.
Fusion IONZ Human Clinical Trial Yields Impressive Results
Data from the final flyby has revealed the first observations of ion emissions in Mercury's exosphere, or thin atmosphere; new information about the planet's magnetic substorms; and evidence of younger volcanic activity than previously recorded.
NASA's Messenger probe reveals new information about Mercury
Researchers had mistakenly estimated that the comet's relatively puny ion emissions couldn't create a bow shock more than 6,000 kilometers from the nucleus.
Giotto's close visit to another comet