(īŏn`ĭk), one of the early orders of architectureorders of architecture.
In classical tyles of architecture the various columnar types fall, in general, into the five so-called classical orders, which are named Doric, Ionic, Corinthian, Tuscan, and Composite.
..... Click the link for more information. . The spreading scroll-shaped capitalcapital,
in architecture, the crowning member of a column, pilaster, or pier. It acts as the bearing member beneath the lintel or arch supported by the shaft and has a spreading contour appropriate to its function.
..... Click the link for more information.  is the distinctive feature of the Ionic order; it was primarily a product of Asia Minor, where early embryonic forms of this capital have been found. In the Ionian colonies of Greece on the southwestern shores of Asia Minor, the Ionic order had attained a full development in the 6th cent. B.C. In the 5th cent. B.C. it appeared in Greece proper, where the ErechtheumErechtheum
[for Erechtheus], Gr. Erechtheion, temple in Pentelic marble, on the Acropolis at Athens. One of the masterpieces of Greek architecture, it was constructed between c.421 B.C. and 405 B.C. to replace an earlier temple to Athena destroyed by the Persians.
..... Click the link for more information.  embodies the one really complete example. Greek Ionic columns are of slender proportion, their height being generally about nine times the column's lower diameter; the order is always used with a base. A column shaft with 24 flutings seems to have been the most developed form. The spiral scrolls, or volutes, at either side of the cap run from front to rear, and an echinus molding with egg-and-dart ornamentation occupies the space between them. The entablature, usually about one quarter the height of the column, has an architrave generally divided into three bands, each projecting beyond the next; a frieze, often adorned with sculpture; and a cornice enriched with dentils, above which are a corona and a crowning cyma molding. A late and vigorously monumental development of the order took place in the Hellenistic temples of Asia Minor at the middle of the 4th cent. B.C. In employing this order the Romans used details that were not as fine. The temple of Saturn shows a variation of the four-cornered Ionic cap, which had been created in Greece for the corner columns of a portico. A cap of this type, with corner volutes, was developed by the Italian Renaissance architect Scamozzi into a design bearing his name; variations of it were widely used during the Renaissance and in subsequent periods, particularly the baroque. For the other Greek orders see Doric orderDoric order,
earliest of the orders of architecture developed by the Greeks and the one that they employed for most buildings. It is generally believed that the column and its capital derive from an earlier architecture in wood.
..... Click the link for more information. ; Corinthian orderCorinthian order,
most ornate of the classic orders of architecture. It was also the latest, not arriving at full development until the middle of the 4th cent. B.C. The oldest known example, however, is found in the temple of Apollo at Bassae (c.420 B.C.).
..... Click the link for more information. .
The Columbia Electronic Encyclopedia™ Copyright © 2013, Columbia University Press. Licensed from Columbia University Press. All rights reserved. www.cc.columbia.edu/cu/cup/

An order of architecture invented by the Greeks, distinguished by an elegantly molded base; tall, slender shafts with flutes separated by fillets; and capitals, using a spiral volute that supports an architrave with three fascias; an ornamental frieze; and a cornice corbeled out on egg-and-dart and dentil moldings.

one of the three main Greek architectural orders. The basic Asia Minor version was developed in stone architecture in the Ionian provinces of ancient Greece between 560 and 500 B.C. (the Temple of Artemis at Ephesus, begun in the middle of the sixth century B.C., architects Chersiphron and Metagenes). The Ionic order differs from the Doric order by a greater lightness of proportion and richer ornamentation of all the parts. The several versions of the Ionic order were especially widespread in the Hellenistic period. 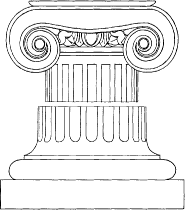 Ionic order: above, capital; below, base
One of the five orders in Classical architecture, originated by the Ionian Greeks. Usually characterized by columns usually having 24 flutes separated by narrow fillets; an entablature, a frieze without triglyphs; dentils in the cornice; elegant detailing; less elaborate than the Corinthian order and less heavy in appearance than the Doric order. Pilasters in the Ionic order often have fluted shafts with a capital consisting of a band of anthemions, with egg-and-dart moldings above.
McGraw-Hill Dictionary of Architecture and Construction. Copyright © 2003 by McGraw-Hill Companies, Inc.