a medieval instrument of torture, consisting of a hinged case (often shaped in the form of a woman) lined with iron spikes, which was forcibly closed on the victim
Collins Discovery Encyclopedia, 1st edition © HarperCollins Publishers 2005 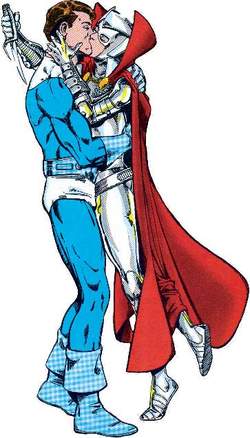 (pop culture)
The likeable super-secret superheroes the T.H.U.N.D.E.R. (The Higher United Nations Defense Enforcement Reserves) Agents, who came to prominence during the heyday of comics' Silver Age (1956–1969), encountered their share of adversaries in their efforts to defend the world. Ominously treacherous villains like Andor, Demo, Dynavac, Vibraman, and Dr. Tarantula fought to derail the team's goal of achieving world peace, but one of the Agents' enemies stood above the rest: Iron Maiden. Iron Maiden originally appeared in the very first issue of T.H.U.N.D.E.R. Agents (1965), in a story illustrated by Wally Wood, the creative force behind publisher Tower Comics' short-lived but fondly remembered line, and written by Len Brown. Her shapely form accentuated by a flexible steel skin (as well as by Wood's sumptuous art style), the beautiful Iron Maiden is in love with Dynamo, the T.H.U.N.D.E.R. Agent whose “thunderbelt” affords him superstrength. A supervillainess-forhire, her deep affection for the perpetually handsome Dynamo prohibits her giving him too hard of a time, no matter the terms of her contracts. In fact, her obsession with Dynamo is her primary weakness, a dynamic not unlike the Golden Age (1938–1954) Harlequin's affection for the original Green Lantern. Although her origin story is unknown, her character traits are without a doubt relentlessness, inventiveness, and deviousness. Perhaps for her mane of red hair or for her metallic body armor, she is nicknamed “Rusty.” Although the original T.H.U.N.D.E.R. Agents comics line, which included solo series for its members Dynamo and Noman, was defunct by 1967 (a mid-1980s revival proved unsuccessful), in the 2000s DC Comics reprinted the classic stories in its deluxe Archives Edition hardcover format, preserving these heralded tales for posterity.
The Supervillain Book: The Evil Side of Comics and Hollywood © 2006 Visible Ink Press®. All rights reserved.