, in Egyptian religion
Isis (īˈsĭs), nature goddess whose worship, originating in ancient Egypt, gradually extended throughout the lands of the Mediterranean world during the Hellenistic period and became one of the chief religions of the Roman Empire. The worship of Isis, combined with that of her brother and husband Osiris and their son Horus, was enormously resistant to the influence of early Christian teachings, and her mysteries, celebrating the death and resurrection of Osiris, were performed as late as the 6th cent. A.D. The functions of many goddesses were attributed to her, so that eventually she became the prototype of the beneficent mother goddess, the bringer of fertility and consolation to all. She was the daughter of the sky goddess Nut and the earth god Geb. Her symbol was a throne and later the cow, and she was frequently represented with a cow's head or cow's horns. During the Hellenistic period, her image outside Egypt became increasingly Hellenic, with ideal features and locks framing her face. Isis was also a goddess of magic, and legends tell of her ability to counteract evil by casting spells. 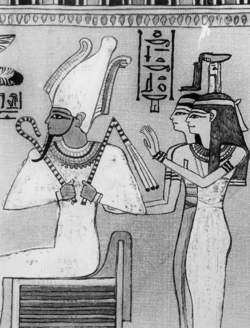 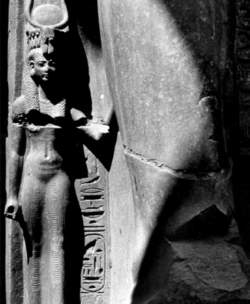 2
an ancient Egyptian fertility goddess, depicted as a woman with a cow's horns, between which was the disc of the sun; wife and sister of Osiris
Collins Discovery Encyclopedia, 1st edition © HarperCollins Publishers 2005

Feedback
Flashcards & Bookmarks ?
Please log in or register to use Flashcards and Bookmarks. You can also log in with
Flashcards ?
My bookmarks ?
+ Add current page to bookmarks
Mentioned in ?
References in periodicals archive ?
'ISIS's loss of territory is further evidence of its false narrative, which tries to legitimise a record of savagery that includes brutal executions, the exploitation of children as soldiers, and the sexual abuse and murder of women and children.
Trump Announces 100% Defeat Of ISIS
He explained that the jihadist group has chosen Mindanao because 23 factions have pledged allegiance to ISIS.
Calida: ISIS eyeing Mindanao as Asian base
He has interviewed many of the Taliban as well as ISIS leaders.
The Islamic State in Khorasan: A review
ISIS apparently has up to 31,100 fighters still active in Iraq and Syria, an alarming number that is close to previous estimate of the group's peak.
Conjuring a Ghost Army? U.S., U.N. Claim up to 32,000 ISIS Fighters in Iraq and Syria
"You're seeing groups from all corners of the world motivated by the same bloody and deadly ISIS ideology, using the same sort of techniques targeting innocent men, women and children."
US warns law enforcement partners of spreading ISIS threat
In including ISIS-Philippines and the Maute Group, the State Department noted ISIS's video of militants in the Philippines pledging allegiance to ISIS in June, 2016.
Palace welcomes Maute group's inclusion list of terror groups
Taliban leadership's plea fell on deaf ears and intense fighting broke out between the two groups in Nangarhar Province, where ISIS managed to gain a foothold for the first time.
ISIS - the New Menace
"These are obviously major blows to ISIS," says Hassan Hassan of the Tahrir Institute for Middle East Policy in Washington, D.C.
Are We Winning the War Against ISIS?
In addition to the ISIS militants, there are around 50,000 civilians left in the city, and officials fear that ISIS will use them as human shields.
US Led Forces Surround ISIS Capital
At times the repetition in the book can be helpful, as unfamiliar readers will feel lost from the proliferation and splintering of various militant groups, along with names that will resemble one another, from ISIS' leader and self-proclaimed Caliph, Abu Bakr al-Baghdadi to Abu Omar al-Baghdadi (d.
ISIS: A History
Sky News recently showed some of 22,000 documents on Assad's ties to ISIS dating years.
Pax Americana For The Arab-Persian Gulf - Part 50 - Syria Post-Assad Needs Miracle
Secondly, why have the U.S and its Coalition forces failed to destroy ISIS oil installations located in ISIS territory, which accounts for a significant portion of the terror group's revenue?
ISIS, Oil & Assad