[ī′säm·ə‚riz·əm]
(biology)
The condition of having two or more comparable parts made up of identical numbers of similar segments.
(chemistry)
The phenomenon whereby certain chemical compounds have structures that are different although the compounds possess the same elemental composition.
(nuclear physics)
The occurrence of nuclear isomers.
McGraw-Hill Dictionary of Scientific & Technical Terms, 6E, Copyright © 2003 by The McGraw-Hill Companies, Inc.
The following article is from The Great Soviet Encyclopedia (1979). It might be outdated or ideologically biased.

(of chemical compounds), a phenomenon that consists in the existence of substances identical in composition and molecular weight but differing in structure or arrangement of the atoms in space and, therefore, in chemical and physical properties. Such substances are called isomers.

Isomerism was discovered in 1823 by J. von Liebig, who showed that the silver salt of fulminic acid, Ag—O—N=C, and silver isocyanate, Ag—N=C=0, were identical in composition but had completely different properties. The term “isomerism” was proposed in 1830 by J. Berzelius. Isomerism is particularly prevalent among organic compounds. The phenomenon of isomerism was successfully explained by the theory of chemical structure developed in the 1860’s by A.M. Butlerov. 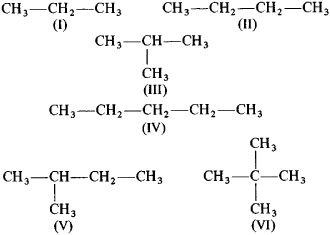 Position isomers are caused by a difference in position of a reactive group (functional group or substituent), with identical carbon skeletons of the molecules. Thus, there are two isomeric alcohols, n-propyl alcohol (VII) and isopropyl alcohol (VIII), corresponding to propane:

Position isomerism is important among aromatic compounds, because the position of substituents in the benzene ring is the main factor that determines the reactivity of a substance. For example, o-dinitrobenzene (IX) and p-dinitrobenzene (X) react readily with ammonia, but m-dinitrobenzene (XI) does not.

For ethers, sulfides, and amines of the aliphatic series there is a special kind of isomerism, metamerism, which is caused by different positions of the heteroatom in the carbon chain. For example, methyl propyl ether (XII) and diethyl ether (XIII) are metamers:

Isomerism of unsaturated compounds can be caused by different positions of the multiple bond, such as in butene-1 (XIV) and butene-2 (XV) or vinylacetic (XVI) and crotonic acids (XVII):

In most cases structural isomers combine the features of skeletal and position isomerism, contain different functional groups, and belong to different classes of substances, so that they differ much more than the isomers of compounds of the same type considered above. For example, the following are isomers: propylene (XVIII) and cyclopropane (XIX); ethylene oxide (XX) and ace-taldehyde (XXI); acetone (XXII) and propionaldehyde (XXIII); methyl ether (XXIV) and ethanol (XXV); and allene (XXVI) and methylacetylene (XXVII).

A special form of structural isomerism is tautomerism (equilibrium dynamic isomerism), which is the existence of compounds in two or more isomeric forms that readily undergo 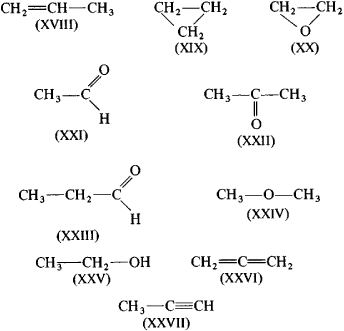 Spatial isomerism. Spatial isomerism is subdivided into two types, geometric isomerism (or cis-trans isomerism) and optical isomerism. Geometric isomerism is peculiar to compounds containing double bonds (C=C, C=N, and so on) and nonaromatic cyclic compounds and is due to the impossibility of free rotation of atoms around a double bond or in a ring. Under such conditions, substituents may be on the same side of the plane of a double bond or ring (cis-position) or on different sides (transposition). The concepts of cis- and trans- usually apply to a pair of identical substituents, and if all the substituents differ, they apply arbitrarily to one of the pairs. Examples of geometric isomers are the two forms of ethylene-1,2-dicarboxylic acid—the cis- form, or maleic acid (XXX), and the trans- form, or fumaric acid (XXXI); others are the cis- and trans- forms (XXXII and XXXIII, respectively) of cyclopropane-1,2-dicarboxylic acid: 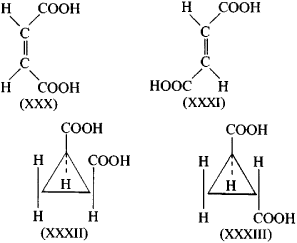 The terms syn- and anti- are often used instead of cis- and trans-, respectively, to denote the isomers of compounds with C=N or N=N double bonds. Thus, in the syn-benzaldoxime molecule (XXXIV), the hydrogen on the carbon atom and the hydroxyl on the nitrogen lie on the same side of a plane passing through the C=N bond, whereas in the antt’-benzaldoxime molecule (XXXV), they lie on different sides:

In the case of unsaturated compounds, cis- forms can become trans- forms, and vice versa; under the action of a small amount of iodine, hydrogen halides, or other reagent, the less stable (labile) form becomes the more stable form, but irradiation with ultraviolet light facilitates the reverse process. Geometric isomers also differ with respect to some chemical properties. Maleic acid, in which the carboxyl groups are spatially close, readily forms maleic anhydride:

whereas fumaric acid does not yield an anhydride.

Optical isomerism is characteristic of organic molecules that do not have a plane of symmetry (a plane dividing the molecule into two mirror images) and are not coincident with its mirror image (that is, with a molecule corresponding to the mirror image). Such asymmetrical molecules are optically active—they are capable of rotation of the plane of polarization of light when polarized light passes through a crystal, melt, or solution of the substance.

Crystals of some inorganic substances, such as quartz, are optically active, but in this case the activity results from asymmetry of the crystal lattice and disappears upon passage of the substance into other states of aggregation. The optical isomerism of organic substances depends only on molecular structure and is not associated with the state of aggregation. The Dutch chemist J. van’t Hoff (1874) was the first to propose an explanation of optical activity based on a tetrahedral model of the carbon atom.

The above formulas show that no spatial rotation of the lactic acid molecule will make it coincide with its mirror image. The two forms of lactic acid are related in the same way as the right and left hands and are called optical antipodes (enantiomers).

Optical antipodes are identical in all physical and chemical properties except optical activity: one form rotates the plane of polarization of light to the left [the 1-form, or ( — )-form]; the other rotates it through the same angle but to the right [the d- form, or ( + )-form]. It is clear that the two forms of the same substance having opposite signs of rotation have mirror-opposed configurations. Identical sign of rotation for different substances does not prove identity of configuration, and substances with opposite signs of rotation can have the same configuration; this is exemplified by levorotatory lactic acid and its dextrorotatory esters.

The symbols L and D, which show the configurational relationship of a given active substance to the L- or D- glyceralde-hyde or to L- or D-glucose, respectively, are used to indicate the genetic link between substances. Levorotatory lactic acid is found to be related to the D- series and is therefore written as D-( —)-lactic acid; the dextrorotatory acid belongs to the L-series and is written as L-(+)-lactic acid.

A mixture of equal amounts of optical antipodes behaves like a separate chemical compound that is devoid of optical activity and differs greatly in physical properties from both of its constituents. Such a substance is called a racemic [the d,l- or (+) form]. In all chemical transformations in which new asymmetric carbon atoms are formed, racemics are always produced, since the probabilities of formation for the dextrorotatory and levorotatory forms are equal.

With compounds of the type abcC—C’’def, which have two asymmetric centers, four isomers are possible, depending on the configurations of the asymmetric atoms C and C”: levo-levo (I), levo-dextro (II), dextro-dextro (III), and dextro-levo (IV):

(where A and B are C’ and C” atoms, respectively).

Forms (I) and (III) and (II) and (IV) are optical antipodes, but forms (I) and (II), (I) and (IV), and (II) and (III) are not, because the configurations of one of their asymmetric centers are opposite, whereas those of the other are identical. Such optical isomers are called diastereoisomers, and they differ markedly with respect to all the most important physical properties. However, if all the substituents at the two asymmetric centers are the same —that is, with compounds of the type abc—C—C”—abc, such as the tartaric acids, HOOCCH(OH)CH(OH)COOH—forms (II) and (IV) will coincide, yielding an optically inactive form (the meso- form), since the optical activity of one center (C) is compensated by equal activity of opposite sign at the other center (C”).

Racemics can be resolved into optical antipodes; reaction with optically active compounds is generally used to achieve this.

The optical activity of cyclic compounds is closely associated with geometric isomerism; thus, the trans- form of a disub-stituted cyclic compound, such as (XXXIII), does not coincide with its mirror image.

Chemical methods can be used to determine the relative configuration of a substance (whether it belongs to the D- or L-series). The actual problem of absolute configuration—that is, of the actual location of substituents around an asymmetric center—is solved by physical methods based on data of the dispersion of optical rotation and X-ray diffraction analysis. Optical isomerism may be due not only to the presence of asymmetric atoms but also to asymmetry of the molecule as a whole—as, for example, with substituted allenes and spirans: 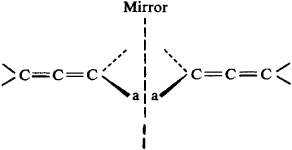 In the case of diphenyl derivatives with bulky substituents in the ortho- positions, optical isomers can exist as a result of the difficulty of rotation of the benzene rings:

This particular form of isomerism is called atropoisomerism (it is essentially a special case of rotation isomerism). Except in the case of atropoisomerism mentioned above, the energy barriers of conformation transitions are not sufficiently high to make possible the isolation of rotation isomers, but they may be observed by such methods as infrared spectroscopy and nuclear magnetic resonance (often only at low temperatures). Research on the states of conformation is of great importance in studying the physicochemical properties and reactivity of substances.

Feedback
Flashcards & Bookmarks ?
Please log in or register to use Flashcards and Bookmarks. You can also log in with
Flashcards ?
My bookmarks ?
+ Add current page to bookmarks
Mentioned in ?
References in periodicals archive ?
Atrial isomerism is rare, and occurs in approximately 1.1/1 000 live births.
The peripartum management of a 32-year-old patient presenting at 34 weeks' gestation with unrepaired cyanotic heart disease
Classically, PS is usually seen with left isomerism. The presence of SIT and SA in the same patient is extremely rare.
An Unusual Presentation of Pancreatic Dorsal Agenesis
Torreggiani, "Lipid geometrical isomerism: from chemistry to biology and diagnostics," Chemical Reviews, vol.
Industrial Trans Fatty Acid and Serum Cholesterol: The Allowable Dietary Level
As a result, the cis-trans isomerism could not be detected by [sup.1]H-NMR.
Styrene/isoprene/butadiene integrated rubber prepared by anionic bulk polymerization in a twin-screw extruder
Super-deformation and shape isomerism: Mapping the isthmus.
Properties of nuclear superdeformed rotational bands in A ~ 190 mass region
Mouse Pitx2 deficiency leads to anomalies of the ventral body wall, heart, extra- and periocular mesoderm and right pulmonary isomerism. Development.
Fetal dystocia and congenital defects--a clinical study of 236 bovines
In photo-excitable NLC, another effective mechanism for order parameter change is Trans-Cis isomerism of azo-NLC or azo-molecule doped-NLC [71,73,76].
Multiple Time Scales Optical Nonlinearities of Liquid Crystals for Optical-Terahertz-Microwave Applications
Seik, "Supramolecular isomerism in cadmium hydroxide phases.
Studies on oligomer metal complexes derived from bisamic acid of pyromellitic dianhydride and 4-bromoaniline
Popovic, "Cis-trans isomerism in cobalt(II) complexes with 3-hydroxypicolinic acid.
Synthesis, crystal structure, and thermal decomposition of the Cobalt(II) complex with 2-picolinic acid