The concept of nuclear isomerism originated in 1921, when the German physicist O. Hahn discovered the radioactive substance uranium Z (UZ), which did not differ from the then known uranium VX2 either in chemical properties or in mass number. Later it was established that UZ and VX2 are two states of the same isotope, 234Pa, having a different energy and half-life. By analogy with isomeric organic compounds, UZ and UX2w were called nuclear isomers. In 1935, B.V. Kurchatov, I.V. Kurchatov, L.V. Mysovskii, and L.I. Rusinov detected an isomeric state in an artificial radioactive isotope of bromine, 80Br, which was the beginning of the systematic study of nuclear isomerism. A large number of isomeric states, with half-lives of 10 6 sec to many years, are known. One of the longest lived isomers is 236Np, with a half-life of 5,500 years.

The decay of isomers is generally accompanied by the emission of conversion electrons or y-quanta; as a result a nucleus of the same isotope is formed, but in a lower energy state. Sometimes beta decay, which leads to the appearance of an isotope of a different element (see Figure 1), is more probable. The isomers of heavy elements may decay through spontaneous fission. 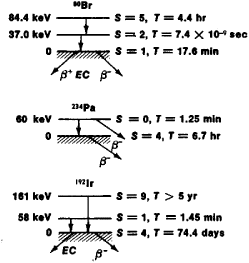 Figure 1. Diagrams of energy levels of the radioactive isotopes “Br, 234Pa, and 192Ir. The isomeric states of the nuclei are designated by the heavy line; the ground states, by diagonal shading. The energy levels (in keV) are indicated at left; the spin and half-life, at right. (|8”) decay with emission of an electron, (β+) decay with emission of a positron; (EC) electron capture. The straight vertical arrows indicate the emission of internal-conversion electrons or γ-quanta.

Nuclear isomerism is due to the structural peculiarities of atomic nuclei. Isomeric states are formed in cases when the transition of the nucleus from a state with higher energy to a lower-energy state through the emission of a γ-quantum is difficult. This is most often associated with a great difference in the values of the spins S of the nuclei in these states. If the difference in the energy in the two states is not great, then the probability of the emission of a γ-quantum becomes small, and consequently the half-life of the excited state proves to be great. Isomers are encountered especially often in nuclei in certain ranges of mass-number values (isomeric islands). This fact is explained by the shell model of the nucleus, which predicts the existence of nuclear levels that are close in energy and have a great difference in spin for certain numbers of protons and neutrons in the nucleus. In some cases (for example, for 180Hf) the appearance of isomers is related to the significant difference in the shape of the nucleus in two nearby energy states. This also leads to a decline in the probability of γ-radiation.