synthetic rubbers obtained from the polymerization of isoprene. The synthesis of isoprene rubber using the catalysts of stereospecific polymerization yields stereoregular polymers whose structure resembles that of natural rubber. Complex compounds of the type A1R3 + TiX4, where R is an alkyl and X is a halogen (the Ziegler-Natta coordination ionic catalysts), serve as catalysts in the production of isoprene rubbers as do organolithium compounds—for example, lithium alkyls and lithium metal. The macromolecules of isoprene rubber are characterized by a high (65–99 percent) content of 1, 4-cis bonds (I), but they also contain 1,4-trans (II) and 3,4 (III) bonds. Isoprene rubbers with the highest 1, 4-cis bond content (92–99 percent) are obtained using complex catalysts.

The density of isoprene rubber is 0.910–920 g/cm3, and its second-order transition temperature is about −70°C. The rubbers are soluble in carbon tetrachloride, chloroform, chloroben-zene, and toluene but insoluble in alcohols and ketones. Isoprene rubbers swell as much as 500 percent in aromatic oils. They are not resistant to the effects of concentrated acids of alkalies, but they are water resistant. The high content of unsaturated bonds in the macromolecules of isoprene rubbers is responsible for their poor resistance to the effects of oxygen. Like natural rubber, 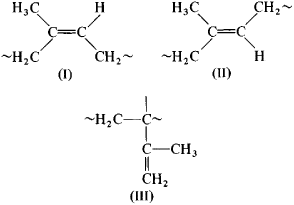 isoprene rubbers can crystallize upon stretching (above 0°C) or when they are unstretched (below 0°C).

Sulfur is the chief vulcanizing agent for isoprene rubbers, while the most extensively used accelerators of vulcanization are thiazole derivatives (including sulfenamides), thiuram disulfides, and others. In fundamental properties, vulcanized isoprene rubbers without filler or with carbon black filler are identical to natural vulcanized rubber.

Isoprene rubbers, especially those made using complex catalysts, are used instead of natural rubber in the production of tires, conveyor belts, consumer goods, and items used in medicine. The manufacture of isoprene rubbers was first begun in the USA in 1958 and in the USSR in 1964. By 1967 the USSR had become the largest producer. The various commercial brands are the Soviet-made SKhI-3 and the foreign IR-307, IR-310, Ameri-pol SN, and natsyn, among others. In 1971 the production capacity of capitalist countries totaled about 350,000 tons.

Feedback
Flashcards & Bookmarks ?
Please log in or register to use Flashcards and Bookmarks. You can also log in with
Flashcards ?
My bookmarks ?
+ Add current page to bookmarks
Mentioned in ?
References in periodicals archive ?
To the best of our knowledge, reports on vulcanization reaction of isoprene rubbers are not yet available for imidazolinium salts.
Multifunctional use of ionic liquids in natural rubber based compounds
Likewise, polar polymers such as nitrile and isoprene rubbers tend to have faster rates of reaction than SBR, butyl and EPDM rubbers.
Review of vulcanization chemistry
Natural (NR) and synthetic isoprene rubbers (JR) possess a complex of well-known valuable properties but have some deficiencies, such as low ozone and corrosion resistance, low resistance to heat aging and low adhesion properties.
Chlorinated EPDM containing 1.5-2.0% C1 in 5-ethylydene-2-norbornene possesses a high rate of vulcanization, which permits to solve the problem of compatibility of isoprene rubbers with low unsaturated EPDM.
Compositions of isoprene and halogenated EPDM rubbers
Butyl (isobutylene isoprene rubber [IIR]), the well-known specialty elastomer, is also based on PIB, containing a small amount (1-3 mol%) of isoprene for cross-linking sites.
Comparison of the performance of vulcanized rubbers and elastomer/TPE/iron composites for less lethal ammunition applications