The simplest examples of particles that can be combined into a single isotopic multiplet are the proton (p) and the neutron (n). Experiments have shown that strong interaction between proton and proton, neutron and neutron, and proton and neutron is identical (if they are in the corresponding identical states); this was the starting point for the establishment of isotopic invariance. The proton and neutron are regarded as two different charged states of a single particle (the nucleon); they form an isotopic doublet. Other examples of isotopic multiplets are the pi-mesons (π+, π0, and π-) and sigma-hyperons (Σ+, Σ0, and Σ-), which form isotopic triplets.

The electric charge Q of a particle belonging to an isotopic multiplet is expressed by the Gell-Mann-Nishijima formula:

Isotopic spin is thus an important characteristic of a hadron—the quantum number, which indicates how many isotopic partners a given particle has (or in how many charged states it may exist).

Isotopic invariance also exists for compound systems of hadrons, in particular atomic nuclei. The isotopic spin of a complex system is composed of the isotopic spins of the particles constituting the system, and addition is performed according to the same rules that are used for ordinary spin. Thus, a system consisting of two particles with isotopic spin of 1/2 (such as a nucleon) and 1 (such as a pi-meson) may have isotopic spin I = 1 + 1/2 = 3/2, or I = 1 – 1/2 = 1/2.

In nuclei, isotopic invariance is manifested in the existence of energy levels with different quantum numbers for different isobars (that is, nuclei that contain an identical number of nucleons and differ in electric charge). The nuclei

The law of conservation of total isotopic spin I in processes caused by strong interactions follows from isotopic invariance. This law leads to definite relations among the probabilities of processes for different particles belonging to identical isotopic multiplets, and also to the prohibition of certain reactions—for example, the reaction d + d → 4He + π cannot take place through strong interaction, since for d (a deuteron) and 4He, I = 0, but for the π0-meson I = 1. Many projects in high-energy charged-particle accelerators have been devoted to experimental verification of these predictions. 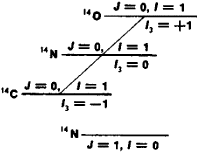 Feedback
Flashcards & Bookmarks ?
Please log in or register to use Flashcards and Bookmarks. You can also log in with
Flashcards ?
My bookmarks ?
+ Add current page to bookmarks
Mentioned in ?
References in periodicals archive ?
The isotopic invariance of types and varieties of quasigroups and loops described by one or more equivalent identities, especially those that fall in the class of Bol-Moufang type loops as first named by Fenyves [7] and [6] in the 1960s and later on in this 21st century by Phillips and Vojtechovsky [25], [26] and [18] have been of interest to researchers in loop theory in the recent past.
On the universality of some Smarandache loops of Bol-Moufang type