Ivan succeeded his father Vasily III, who died in 1533, under the regency of his mother.
..... Click the link for more information. . 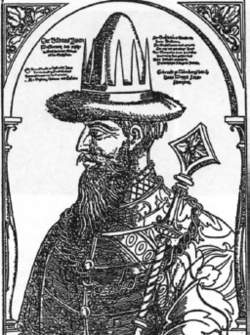 Ivan the Terrible, who has been compared to Vlad the Impaler.

Ivan the Terrible was the first czar of Russia. His arbitrary and cruel behavior led to his comparison with Vlad the Impaler, the historical Dracula. Ivan inherited the title of Grand Duke of Moscovy when he was three and grew up watching the leading families (the boyars) of his land lead the countries through a period of chaos as they fought among themselves for bits of power. He was seventeen when a Chosen Council emerged to bring about reform. Although they succeeded in ending the chaos, Ivan continually fought with them over a multitude of administrative matters. In 1564, in frustration, he suddenly abdicated. When the people demanded his return, he was able to dictate the terms of his reinstatement and gain almost absolute power.

He moved quickly to establish his own ruling elite, the Oprichnina, which wrested much of the remaining power from the boyars.

Ivan’s reign of two decades was marked, in part, by his conquest of the lands along the Volga River and his movement into Siberia, as well as by a disastrous war in which he unsuccessfully tried to capture Livonia (today Estonia). He is most remembered however, not for his political actions, but for his personal conduct. In his desire to establish a strong central Russian government, he was quick to punish (and even execute) many who challenged his rule or in any way showed disrespect for what he considered his exalted status. He manifested symptoms of extreme paranoia and had a quick and fiery temper. In 1580, in a moment of rage, he killed his own son, a prospective heir.

Outstanding among the traits remembered by his contemporaries, Ivan possessed a dark sense of humor, quite similar to that attributed to Vlad. It often characterized the tortures and executions of those who became the objects of his rage. As one historian, S. K. Rosovetskii, has noted, many of the stories told about Ivan were variations of those originally ascribed to Vlad a century earlier. For example, there was a Romanian folk story about the leading citizens of the town of Tirgoviste, Dracula’s capital. The citizens had mocked Dracula’s brother. In revenge, he rounded up the leading citizens (the boyars) following Easter Day celebrations and, in their fine clothes, he marched them off to work on building Castle Dracula. Ivan, it was reported, did something quite similar in the town of Volgoda when the people slighted him on Easter morning. He rounded them up, still dressed in their Easter finery, to build a new city wall for the town.

Possibly the most famous Dracula story told of Ivan concerned the Turkish envoy who refused to remove his hat in Dracula’s presence. Dracula, in turn, had the man’s hat nailed to the top of his head. Ivan, it was reported, did the same thing to an Italian diplomat (or in an alternative account, to a French ambassador).

Ivan, like Vlad, often turned on powerful figures in Russian society and humiliated them to prevent their return to the dignity of their offices. The story was told, for example, of his attack on Pimen, the Russian Orthodox metropolitan of Novgorod. He stripped Pimen of his church vestments, had him dressed as a strolling minstrel (an occupation denounced by the church), then staged a mock wedding in which Pimen was married to a mare. Presenting the defrocked prelate with the signs of his new status, a bagpipe and a lyre, Ivan sent him from the city.

Ivan differed from Vlad in his sexual appetite. He was a polygamist with seven wives and as many as 50 concubines. He also left his immediate successors with a very mixed inheritance. Although he had expanded the territory of Russia, he left behind a bankrupt country, and discontent with his rule grew steadily. Ivan, however, died quietly in the middle of a chess game on March 18, 1584.

Feedback
Flashcards & Bookmarks ?
Please log in or register to use Flashcards and Bookmarks. You can also log in with
Flashcards ?
My bookmarks ?
+ Add current page to bookmarks
TheFreeDictionary presents:
Write what you mean clearly and correctly.
Mentioned in ?
References in periodicals archive ?
(11) In my first--very tentative--publication on this topic, I suggested that Ivan's "demagogic" or "populist" efforts to create his own image as a harsh but just ruler may have contributed not only to his popular perception by contemporaries but also to his later folkloric persona: Maureen Perrie, "The Popular Image of Ivan the Terrible," Slavonic and East European Review 56, 2 (1978): 275 86.
Kevin M. F. Platt, Terror and Greatness: Ivan and Peter as Russian Myths
Three years later, he was promoted as an Academician of the Division of History and Philosophy, lecturing on Ivan the Terrible in Moscow's Hall of Columns (p.
The Cult of Ivan the Terrible in Stalin's Russia
The second section is devoted to the Stalinization of Ivan the Terrible himself from first steps in the mid-1930s (the struggle against the Pokrovskii school) to the total rewriting of Russian history in the Zhdanov era.
The Cult of Ivan the Terrible in Stalin's Russia
Though this view has been criticized on several occasions, it is still a major component of mainstream literature about Ivan the Terrible. (1)
Normalizing the debate about Kurbskii?
"We determine conclusively, without hesitation or doubt, that the accused is Ivan who was known as 'Ivan the Terrible', gas chamber operator at the Treblinka death camp," he read from the 400-page verdict.
Court convicts Demjanjuk of war crimes; RETRO REPORT April 19, 1988 - How we covered..
Nearly 70 people were killed as 'Ivan the Terrible' tore through the Caribbean in recent days.
12 die as Ivan hits the US
Holidaymakers have been rushed from Jamaica to the Dominican Republic's north coast in the hope they can escape from the storm, dubbed Ivan the Terrible.
Jamaicans brace themselves
Ivan the Terrible: Profiles in Power, by Andrei Pavlov and Maureen Perrie.
Ivan the Terrible: Profiles in Power
Demjanjuk was originally identified in 1977 by the Justice Department as "Ivan the Terrible," a particularly sadistic Nazi guard at the Treblinka death camp in occupied Poland.
U.S. Court Says Demjanjuk was a Nazi Guard
I caught the occasional "event"--Helgi Tomasson's guest debut as Albrecht in Giselle, for example, or the revival of Yuri Grigorovich's Ivan the Terrible, with the marvelous Jean Guizerix (a great Robbins interpreter, by the way), Dominique Khalfouni and, also a favorite at ABT, Michael Denard.
Attitudes
The book begins with Russia under Ivan the Terrible and ends with our own time.
The Cossacks
Rossiyada (1771-79; "Russian Epic") is based on the capture of Kazan (1552) by Ivan the Terrible, and Vladimir vozrozhdyonny (1785; "Vladimir Reborn") is concerned with St.
Kheraskov, Mikhail Matveyevich