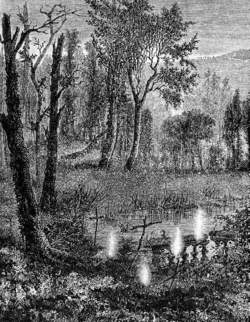 Jack o' Lantern is a term for the phosphorescent light sometimes seen over swamps and marshes. Courtesy Fortean Picture Library.

The most important Witchcraft celebration is that of Samhain, which takes place on the eve of November. This sabbat celebration marks the change of year, from the summer months to the winter months. There is also a shift of emphasis from the Goddess to the God. On the old Celtic calendar, Samhain was the start of the new year, which was reckoned by nights rather than days. In 527 CE there was a change, and New Year's Day was declared to be March 25. Almost a thousand years later (1600 CE in Scotland, 1751 CE in England) this was changed again, to January 1.

In early pre-Christian times people followed a basically lunar calendar. Festival celebrations began at the rising of the moon. In other words, they started on the eve of the actual day. The calendar ran from Samhain to Samhain. This celebration, for the Celts, commemorated the creation of the world, when chaos was transformed to order. On Samhain night, the spirits of the dead were free to roam and return to earth to visit with their loved ones. It was said that the veil between the worlds was thin on this particular night.

When the Witches and Pagans went off to their sabbats and other Samhain celebrations, they would carry with them a light to symbolize a departed spirit traveling with them. So that the flame would not be blown out by any wind, they carved out a hollow in a large turnip and placed the candle there. Many years later, in America, the turnip gave way to a pumpkin, which was larger and much easier to carve. To add to the idea that it was the spirit of a dead loved one being carried, a face was carved into the side of the pumpkin. This primitive lantern became known as a Jack o' Lantern. It's also from these beliefs that the idea of ghosts roaming at Hallowe'en came about.

Jack o' Lantern is also a term applied in some areas to phosphorescent light seen over swamps and marshes, otherwise known as swamp gas, will-o'-the-wisp,

and fox-fire. In Ireland it is sometimes called Seán ne gealaige, or "Jack of the bright light." Together with the Celtic ideas of returned souls, it is believed by some to be the soul of a dead spirit who is wandering, searching for someone or something.