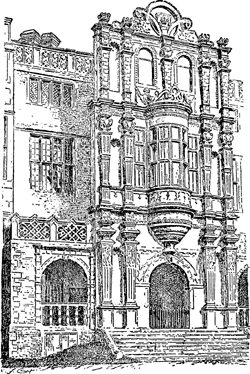 Jacobean architecture a manor house
An imprecise term, applied to an English architectural style of the early 17th century that adapted the Elizabethan style to continental Renaissance influences; applied to buildings erected during the reign of James I (1603–1625) and thereafter. Large houses were usually two to three stories high and might have elaborate multicurved Flemish gables, Tudor arches, and decorative chimneys, and casement windows (separated by stone or cement mullions) that had small, diamond-shaped panes of glass held in place by grooved strips of lead.

Feedback
Flashcards & Bookmarks ?
Please log in or register to use Flashcards and Bookmarks. You can also log in with
Flashcards ?
My bookmarks ?
+ Add current page to bookmarks
TheFreeDictionary presents:
Write what you mean clearly and correctly.
Mentioned in ?
References in periodicals archive ?
Pevsner observes that the building's chastity and bareness must have seemed as foreign to contemporary beholders, used to the entertaining elaborations of Elizabethan and Jacobean architecture, as Modernism was to the Edwardians.
Fit for a queen: Remodelling of part of the Queen's House, Greenwich permits its use as a gallery and improves circulation without disturbing its seventeenth-century architecture. (Interior Design)
Hailed as one of the country's finest surviving examples of Jacobean architecture, the Grade One-listed building has been closed to the public for almost three years while skilled craftsmen painstakingly restored its unique features, many of which date back to the time of the Civil War and the reign of Charles I.
Truly remarkable; RE-OPENING: Lord Mayor praises Aston Hall pounds 12.5m revamp at preview event
In this wonderfully illustrated book, Nicholas Cooper takes us on a journey through some of the finest examples of Jacobean architecture around today.
Architecture through Jacobean eyes; Archive images of Birmingham's Aston Hall have been reproduced to celebrate some of England's finest Jacobean country houses
Two 16th and 17th century merchants' houses lurk there, one of them a rare example of Jacobean architecture.
Great days out
outstanding example of Jacobean architecture and one of the most important historic buildings of its type in the Midlands.
Well worth preserving
A pounds 10 million restoration project for Aston Hall and its park, the county's finest example of Jacobean architecture, is also being finalised.
Pride leader defends project
The Feathers Hotel is internationally recognised for its beautiful Jacobean architecture and medieval heritage.
BOOK IT! Get away cheap with these special offers..