Puri (po͞oˈrē), town (1991 pop. 125,199), Odisha (Orissa) state, E central India, on the Bay of Bengal. The life of the town centers around the cult of Juggernaut (Jagannath), a form of the Krishna incarnation of Vishnu. This cult, unique in Hinduism, has no caste distinctions. The images of Juggernaut and his sister and brother repose within a vast temple compound. Every summer each statue is mounted on an enormous temple cart and dragged by hundreds of pilgrims to a summer home 1 mi (1.6 km) distant. Although pilgrims have hurled themselves to death beneath the wheels of the cart, this act, contrary to common belief, is not part of the ritual. Puri is a district administrative center. Limestone carving, toy making, fish curing, and rice milling are the main industries.
The Columbia Electronic Encyclopedia™ Copyright © 2022, Columbia University Press. Licensed from Columbia University Press. All rights reserved. 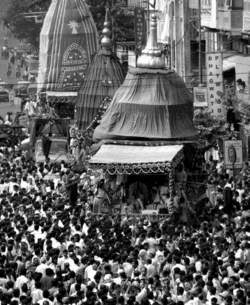 Jagannath Rath Yatra Festival attendees in Calcutta, India, honor Jagannath, one of the many incarnations of the Hindu god Vishnu.AFP/Getty Images.

Jagannath is the name of a Hindu deity (an incarnation of Vishnu); a prominent Hindu temple located in Puri, a coastal city in the state of Orissa in eastern India; and a festival celebrated by Vaishnava Hindus worldwide. Vaishnavas, Hinduswho primarily honor Vishnu as the major Hindu deity, believe that Lord Jagannath was responsible for the creation of the whole universe. In the temple in Puri, Jagannath is closely associated with his sister Subhadra and his brother Balabhadra.

The Puri Temple was built by Raja Ananta Varman Chodaganga Dev in the twelfth century CE, then maintained by successive Hindu rulers through the next four centuries. In 1558 Orissa was conquered by Afghan Muslims already in power in neighboring Bengal. The Afghans held Orissa until 1592, during which time worship at the Puri Temple was suppressed. After they were driven out, even though Muslim influence continued to dominate in the region, the statues were reinstalled and worship of Lord Jagannath resumed.

Lord Jagannath and his siblings are installed in the sanctuary in the rear of the temple. A daily ritual begins at 5 a.m. and consists of several meals (the presentation of food offerings, called Prasadam), several dressings (costume changes) of the statues, and the distribution of food to the people.

The Puri Temple is part of the Hindu attempt to mark the subcontinent as holy space. At the same time, the area is to some extent a religious and cultural enigma. Jagannath and the associated deities at the Puri Temple are seen as officially related to the local tribal people, who are considered to exist outside of the traditional tribal or caste system. Generally, members of the higher castes would not consider eating with such outsiders. However, at Puri, the tribal groups prepare all the prasadam (holy food), and pilgrims eat it without regard to the caste rules. Some have suggested that what occurs at the temple may be derived from an earlier effort to reform the caste system.

The major attraction at Puri is the annual Jagannath festival that occurs in midsummer. The deities are placed in three large carts and carried from the temple to their “summer temple,” the Gundicha Mandir, a little over a mile from the main Jagannath temple. The cart upon which Lord Jagannath rides is a massive wooden structure constructed from hundreds of logs cut from the sacred phasi trees, a forest of which is kept in cultivation just for this annual event. Two slightly smaller carts carry Subhadra and Balabhadra. Lord Jagannath’s cart requires four thousand men to it pull it, and once it is moving it is extremely difficult to stop (this fact being the origin of the popular war term juggernaut). Devotees in the tens of thousands gather to watch Lord Jagannath take the short trip. He will stay in the summer temple only seven days and is then returned to the main temple.

The Jagannath festival, though held in smaller versions in several other Indian cities, was largely unknown in the West until the advent of the International Society for Krishna Consciousness (ISKCON), the Hare Krishna movement, in the United States in the 1960s. Very soon after organizing, ISKCON began to hold Jagannath festivals in different American cities, and their annual reenactment of the trip to the summer temple has become a popular attraction. It is currently held each summer in the major cities throughout the West where the movement has established temples.

Feedback
Flashcards & Bookmarks ?
Please log in or register to use Flashcards and Bookmarks. You can also log in with
Flashcards ?
My bookmarks ?
+ Add current page to bookmarks
Mentioned in ?
References in periodicals archive ?
The three chariots have been named, Jagannath Rath as Nandighosh, Balaram's Rath as Taladwaja and Subhadra's Rath as Darpadalana.
Odisha: Several devotees flock to witness 'Return Car Festival'
"It was a great feeling for us that thousands of devotees pay homage to Lord Jagannath. The initiative of performing rath yatra was taken by textile mill workers and now we are taking forward this festival," said Ramesh Chandramani, the President of Jagannath Mandir.
Jagannath Rath Yatra 2012: 50,000 Devotees Attend as Lord's Chariot Reaches Destination (PHOTOS)
Meanwhile, a police official said: " No cop tried to thrash Jagannath. He was taken to the police station after a a complaint of abduction.
Okhla on the boil over tutor's death
As part of Rath Yatra, the deities of Jagannath, his elder brother Balabhadra and younger sister Subhadra are taken out in a procession.
To spread communal harmony, Muslim community gifts silver chariot to Jagannath temple in Ahmedabad
Meanwhile, talking about the security arrangements in Ahmedabad during the chariots procession, IGP Soumya Priyadarshai said, "The police and other administrations are all set to make the Jagannath Rath Yatra successful.
Gujarat CM, Deputy CM offer prayers at Jagannath Temple in Ahmedabad
They are being supported by the Jagannath Sena, a pro- Hindu outfit active in Puri.
Jagannath image on booze bottles
Clad in a white shirt and yellow overcoat, Shah who was accompanied by his wife Sonal Shah offered prayers to Lord Jagannath
Ahmedabad: Amit Shah offers prayers at Lord Jagannath Temple
Jagannath temple public relations officer Laxmidhar Puja Panda said the chief temple administrator was informed about the case soon after it was first Daitapatis Niyog president, Ramkrushna Das Mohapatra, said he " regretted the incident", adding that such a thing should not have happened to a wellknown Odissi dancer.
Italian Odissi danseuse roughed up in Puri
Prime Minister Narendra Modi also greeted everyone on the occasion of the Rath Yatra and prayed to Lord Jagannath.
President Kovind, PM Modi greets citizens on occasion of Lord Jagannath Rath Yatra
(10) P.N.Nair (ed.), Bruton's visit to Lord Jagannath 350 years Ago (Calcutta, 1985), p.68
Essentialising the Jagannath cult: a discourse on self and other
With the Jagannath and Sun Temple this completes Orissa's temple triangle.
Feasting with the Gods