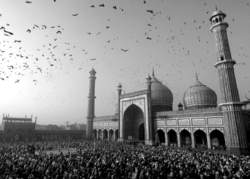 Thousands pray at the Eid al-Adha festival at the Jama Masjid mosque in New Delhi. One of the most important Muslim mosques in India, Jama Masjid is home to a number of relics from the Prophet Muhammad. AFP/Getty Images.

Jama Masjid, in Delhi, India, is one of the largest mosques in India and all the more impressive for housing several relics of Muhammad the Prophet. It was erected by order of the Mughal emperor Shah Jahan (1592–1666), better known for building the Taj Mahal. He completed the mosque in 1644. Architects chose red sandstone and white marble as their main building materials.

While the mosque is valued by students of architecture as a culminating example of the Muslim presence in northern India, the primary attraction is the small, white shrine in the northwest corner of the courtyard, where the relics of the Prophet are kept. In the northeast corner of the shrine is a red hair from the beard of Muhammad. Other items include Muhammad’s sandal, a chapter of the Qur’an written on deerskin (one portion reportedly written by Muhammad’s grandson), the canopy from Muhammad’s tombstone, and Muhammad’s footprint on a stone.

Many local worshipers believe the mosque will be the site where Muhammad will eventually return to earth to announce the final judgment.