James A. Garfield, Assassination of 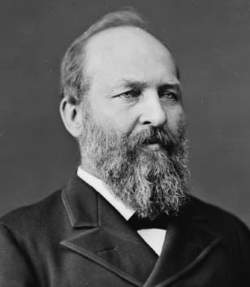 President James A. Garfield was assassinated in 1881 by an occultist.

James A. Garfield, Assassination of

President James A. Garfield had barely begun his term in office when he was assassinated by an occultist from a free-love community who received his orders to kill directly from God.

The assassin was armed and waiting when President James A. Garfield and his entourage arrived at the Baltimore and Potomac Railroad station in Washington, D.C., on the morning of July 2, 1881. Garfield planned to attend a commencement program at his alma mater, Williams College, then journey to the summer White House on the New Jersey shore for a brief vacation. The president left his carriage, walked into the station, and settled back wearily on a wooden bench.

The Secret Service was not so security conscious in those days, and no one paid any attention to a slight, bearded man who had walked up behind the presidential party. No government agent appraised the almost glassy stare of the stranger, and no alert eye saw him slip his trembling right hand into the inner pocket of his worn suit coat and withdraw a snub-nosed British Bulldog pistol.

Forcing a crooked smile, the assassin fired a bullet into Garfield’s back. As the president was slammed forward off his bench and onto the floor of the railway station, the bearded man leveled his weapon at arm’s length and fired again. The second bullet plowed into the fleshy portion of the president’s arm.

As the assassin walked deliberately toward an exit, a doctor in the station dashed to Garfield’s aid. Hastily the physician probed the wounds, and the president’s face twisted with pain. “Thank you, doctor,” he gasped. “Thank you, but I am a dead man.”

The escaping assassin was apprehended as he left the station. He was identified as Charles J. Guiteau, an attorney, religious fanatic, pamphleteer, and vociferous advocate of the occult sciences who had become incensed when his application to be the U.S. ambassador to France was denied.

Later, in his jail cell, Guiteau was without remorse. He was, quite the contrary, wonderfully relieved. Guiteau had experimented with offbeat religious expression and various occult ritualistic practices. In reference to his fascination with otherworldly communication, he stated that such etheric intercourse brought into a man a “spirit” that could inspire him to do great things.

Death came slowly to the mortally wounded president. Garfield lingered near death throughout a long summer, then he died in Elberon, New Jersey, on September 19 when complications developed.

James Abram Garfield, born in Cuyahoga County, Ohio, November 19, 1831, was the last U.S. president to be born in a log cabin. Before he became involved in the Republican Party, Garfield taught school, and in 1858 he married Lucretia Rudolph. In spite of a promising military career in which he rose to major general of volunteers during the Civil War, he resigned in 1863, after having been elected to the House of Representatives. Garfield was known for a compelling oratorical style and keen parliamentary skills, which soon made him the leading Republican in the House. His reputation was tainted by his acceptance of a fee in a paving contract case and by suspicions of his involvement in the Crédit Mobilier scandal.

Garfield weathered the criticisms against him and was elected to the Senate in 1880. Then, as a result of a deadlock in the Republican convention, he became the party’s presidential candidate. In the election, he defeated the Democratic choice, Winfield Scott Hancock. Garfield had been in office only one hundred days when he was shot by Guiteau.

“It was the Deity who inspired me to remove the President,” Guiteau insisted when he was notified of Garfield’s death. “I had to use my ordinary judgment as to the ways and means of accomplishing his will, but I was acting according to orders.”

Guiteau had always marched to a different drummer, but the Deity, whom he affectionately called “Lordy,” had never seen fit to play the little man a tune of success. Guiteau had failed miserably at every enterprise that he had ever undertaken. When he arrived in the nation’s capital in 1881 to seek his fortune, he was recently divorced, physically and emotionally exhausted, yet at the same time obsessed with a sense of destiny and personal infallibility. Such seemingly disparate psychological elements may have inclined Guiteau toward an attitude of receptivity when he heard the disembodied voices speaking to him from the shadows of his room in a rundown Washington boardinghouse. “The President must be removed,” the voice whispered. Whether it was some inner voice speaking to him from an obscenely darkened portion of his own psyche or whether it was some independent malignant entity, the effect of those words would soon accomplish the same outrageous deed. When the voice proclaimed, “You are the man to do this,” Guiteau accepted the bloody charge with grave responsibility.

Guiteau did confess, however, that his immediate reaction had been one of shock and revulsion. He had never been a violent man. Was this a true revelation from the Deity or a temptation from Satan? Guiteau prayed for many weeks until the voice was revealed to be the Divine Presence.

Few neighbors in Freeport, Illinois, would have suggested that any kind of holy dispensation was to be found around the Guiteau residence when Charles was born in 1841. Luther Guiteau, Charles’s father, was a temperate, hard-working bank cashier, but it was also true that the senior Guiteau had most unusual beliefs for that place and time. He attempted to heal his neighbors with his “God-given” powers, he was an avid student of the occult, and he was an avowed follower of the cultist John Humphrey Noyes, a controversial figure who had founded the Oneida Community in New York State. Oneida was organized on what Noyes termed “Bible Communism,” with all property owned by the commune. Noyes was convinced that the Second Coming of Christ had occurred in 70 C.E. with the destruction of Jerusalem. Since man was, therefore, on a kind of spiritual probationary period, Noyes required absolute moral perfection in his followers.

Noyes’s detractors took issue with his definition of “absolute moral perfection,” for in their estimation the Oneida Community was the epitome of free love, unlicensed sex, and the unrestrained practice of organized perversion. When Charles Guiteau entered the Oneida Community as a young man, he was informed that all members should love each other equally. Fidelity between couples was considered bad social form and was evaluated as the sin of selfishness. Sexual relations were permitted at Oneida between any consenting couple who desired them.

In spite of—or perhaps due to—the commune’s unusual sex code, Guiteau was hard pressed to find a consenting female adult. After a humiliating session wherein he sat upon a chair in the center of a room while the other members of the commune assessed his personal faults, he left Oneida to wander about the nation in search of his individual destiny.

Guiteau practiced as an attorney in New York until a newspaper published a story about his misappropriation of a client’s funds. For a time he traveled as a stumble-tongued evangelist and moved from town to town in a continual effort to stay a few minutes ahead of county sheriffs and the outraged tradesmen he had bilked. In Philadelphia he sought guidance from a fortune-teller and consulted a phrenologist who claimed to delineate character from the information of the skull. Throughout his adventures as a fast-traveling religio-occult follower, Guiteau developed irrational grandiose schemes that he swore would make millions for any person who financed his enterprises. When asked about the source of these ideas, he explained: “The spirit speaks to me.”

During his trial for Garfield’s murder, Guiteau on numerous occasions had to be restrained from launching into shouting attacks against the prosecution, the trial judge, and even his own defense attorney. Sentenced to death, the bearded little man calmly walked up the steps of the gallows on the morning of June 30, 1882. He dismissed the solace of the prison minister and announced that he would read a selection from the tenth chapter of Matthew. Next the condemned assassin read an original poem entitled “I Am Going to the Lordy, I Am So Glad.” Upon completion of the last stanza of his poem, Guiteau stood erect as the hangman placed the noose over his neck and fitted the traditional black hood over his head. Guiteau dropped his manuscript and the trap was sprung.

To the end, the demented little man maintained that he had assassinated the president because he was compelled to do so by the voice of God.