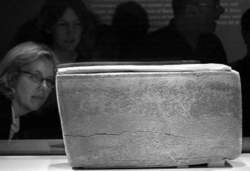 The discovery of the James ossuary in 2002, seen here on display at the Royal Ontario Museum, has sparked considerable debate. Is the inscription on the limestone box genuine, and does it mean that it contains the bones of Jesus Christ’s brother?AFP/Getty Images.

On October 21, 2002, the popular scientific journal Biblical Archaeological Review announced the existence of an ancient limestone box described as an ossuary, or burial box, some 50 centimeters by 25 centimeters by 30 centimeters. The ossuary shows an inscription carved on its side in Aramaic that reads: “Ya’akov bar Yosef akhui di Yeshua,” which in translation becomes “James, son of Joseph, brother of Jesus.” If genuine, this box would be the earliest tangible evidence of the existence of Jesus of Nazareth, outside of the biblical narrative. The box also reiterated the questionable nature of the many relics that now exist throughout Christendom which claim to come from the time of Jesus’ ministry, from the Shroud of Turin and Veronica’s Veil to icons supposedly tied to the apostle Luke.

The authenticity of the ossuary was immediately called into question, and as far as possible, preliminary tests were run to support the claims of its proponents. Among the first to pronounce on it, Israeli geologists confirmed that the limestone is from the Jerusalem area and was probably quarried in the first or second century CE. Also, an analysis of the surface of the box suggested theinscription was made soon after the ossuary was fashioned from the rock. The language and style of the inscription are consistent with that of the first century (20 BCE-70ce). Critics have noted the same scholarship that authenticated it could possibly have faked it.

Primary doubts about the ossuary begin with its checkered modern history. Reputedly it was found in a cave near Silwan by an Arab laborer who subsequently sold it to an antique dealer, who in turn sold it to the present owner. There is little information on the site where the ossuary was found, which could ideally be examined independently.

Adding its voice to doubts about the ossuary, on June 18, 2003, the Israeli Antiquities Authority formally announced its opinion that the box was a forgery. Their report emphasized both the findings from their careful examination of the box and the problems of its modern discovery. Rochelle Altman, one scholar who had examined the box, concluded that the part of the key inscription that reads “Jacob (James) son of Joseph” was likely carved in the first century, but that the later part of the inscription, which reads “brother of Joshua (Jesus),” was a later addition, probably from the third or fourth century. Altman noted significant stylistic changes between the two parts of the inscription.

Feedback
Flashcards & Bookmarks ?
Please log in or register to use Flashcards and Bookmarks. You can also log in with
Flashcards ?
My bookmarks ?
+ Add current page to bookmarks
References in periodicals archive ?
Amnon Rosenfeld, Howard Feldman, and Wolfgang Krumbein provide scientific evidence that strongly supports the authenticity of the inscription on the James Ossuary (i.e., "James son of Joseph brother of Jesus").
The Tomb of Jesus and His Family? Exploring Ancient Jewish Tombs near Jerusalem's Walls
The 22 contributions are organized into sections on ossuaries and Jewish burial customs in Judea and Galilee; inscriptions and prosopography; methodologies for investigating DNA and patina evidence; the Talpiot tomb, a "Jesus family," and Mary Magdalene; the James ossuary (thought by some to contain the remains of Jesus's brother); and Talpiot, statistics, the holy sepulcher, and the Apostles.
The Tomb of Jesus and His Family? Exploring Ancient Jewish Tombs Near Jerusalem's Walls; proceedings
They also give evidence that the missing ossuary is the famous James ossuary with the carved label: James son of Joseph, brother of Jesus.
The Tomb of Jesus and His Family?
Byrne, Ryan, and Bernadette McNary-Zak, eds., Resurrecting the Brother of Jesus: The James Ossuary Controversy and the Quest for Religious Ethics.
Books received
Currelly's unease over the whole matter probably led him to spend a chunk of his memoir defending their authenticity, a step that reinforces the linkage of his reputation with that of the so-called relics, even as the ROM is now linked with the highly contested "James Ossuary" of 2002.
A culture builder: a lively memoir revisits the birth of the Royal Ontario Museum
One analyst even uses the now-debased term, "slam dunk," when a coffin gone missing from the original group is identified as the controversial "James ossuary" of five years ago, now entangled in an Israeli court case.
Grave matters
The James ossuary is a pretty good example of that.
Armageddon uncovered
Since the discovery of the so-called James Ossuary, interest in James and his letter has grown considerably.
Brother of Jesus, Friend of God: Studies in the Letter of James
Months ago, Laramie County Community College Professor Mark Elliot and Paul Flesher, director of the Religious Studies Program at the University of Wyoming, discovered that the inscription on the so-called James ossuary is modern writing carved onto an ancient ossuary.
Wyo. college prof. helps expose Jesus ossuary
The box in question was the now notorious James ossuary, a bone casket recently brought to light and on exhibit at the Royal Ontario Museum.
The ossuary, the panel, the questions
That leads into a balanced discussion of crucifixion, the burial of Jesus in the Gospel accounts, and the association of the Talpiyot tomb and the "James ossuary." Magness' very useful interaction with the sources and current scholarly opinion is followed by a set of reasonable conclusions that help to set aside what she considers "widespread misconceptions" (p.
Stone and Dung, Oil and Spit: Jewish Daily Life in the Time of Jesus
First, remember that many trumpeted the supposed James ossuary a couple of years ago as evidence of a historical James the lust and of his brother Jesus (since the inscription there was "James, son of Joseph, brother of Jesus").
A crowded but empty tomb
Encyclopedia browser ?
Full browser ?
CITE
Site: Follow: Share:
Open / Close