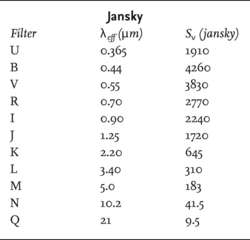 (jan -skee) Symbol: Jy. The unit of flux density adopted by the IAU in 1973 and used throughout the spectral range, especially for radio and far-infrared measurements; it is named after Karl Jansky, who discovered radio emission from the Milky Way in 1932. One jansky is equal to 10–26 watts per square meter per hertz. It is possible to calculate the equivalent flux density, S ν, in janskys from a value of magnitude at the effective wavelength, λeff, appropriate to a particular optical or infrared filter (see table). For example, an R magnitude of 3.2 corresponds to a flux density at 0.7 μm of
2770 × 10–0.4 × 3.2 Jy
i.e. 145 Jy. (The table gives the flux level for 0.0 magnitude.)
Collins Dictionary of Astronomy © Market House Books Ltd, 2006
The following article is from The Great Soviet Encyclopedia (1979). It might be outdated or ideologically biased.

a subsidiary unit of the spectral density of radiant flux. Used in radio astronomy, it is named in honor of K. Jansky (1905–50), an American scientist who discovered cosmic radio emission in 1932. Its abbreviation is Jy; 1 Jy = 10–26 watt per square meter per hertz.

Feedback
Flashcards & Bookmarks ?
Please log in or register to use Flashcards and Bookmarks. You can also log in with
Flashcards ?
My bookmarks ?
+ Add current page to bookmarks
Mentioned in ?
References in periodicals archive ?
Part of what makes 6.5 Creedmoor attractive to hunters is that it shoots fast and flat, Janski contends.
"Guys are buying a lot of 6.5 Creedmoors," Janski informed.
In long-range precision shooting, Janski is also selling a lot of riflescopes.
Contrary to Martinez's experience, the MSR market has almost vanished for Janski's store.
Janski conveyed there isn't anything really new in bolt-action rifles.
"The Browning A5 is still doing well," Janski noted.
Likewise, Janski admitted the store's approach to long-gun sales remains the same as it was the past several years.
LONG-GUN SALES IN THE "NEW NORMAL"
After the program had languished in the earlier part of the decade, coach Steve Janski has re-energized the program with both Mitchell and talented signal-caller Wes McMullen, 2,054 yards passing in 2008, back.
Shiloh Christian loaded for repeat run at 4A Crown
A neighbour had been looking after their three rabbits while Mr and Mrs Janski were away from their home in Handel Street, Golcar.
Mrs Janski said: "There's no way he could have got out on his own.
Plea after pet rabbit is stolen