month, in chronology, the conventional period of a lunation, i.e., passage of the moon through all its phases. It is usually computed at approximately 29 or 30 days. For the computation of the month and its harmony with the solar calendar and for the months in others than the Gregorian calendar, see calendar. For the difference between the sidereal month and the synodic month, see moon. Certain stones have in ancient and modern times been connected with the months; these lucky stones, or birthstones, are often given as follows: January [from the god Janus]: garnet; February [Lat.,=expiatory, because of ancient rites]: amethyst; March [from the god Mars]: bloodstone or aquamarine; April: diamond; May: agate or emerald; June [from the gens Junius]: pearl or moonstone; July [from Julius Caesar]: ruby or onyx; August [from Augustus]: carnelian or peridot; September [Lat.,= seven; formerly the 7th month]: chrysolite or sapphire; October [eight]: beryl, tourmaline or opal; November [nine]: topaz; December [ten]: turquoise or zircon.
The Columbia Electronic Encyclopedia™ Copyright © 2022, Columbia University Press. Licensed from Columbia University Press. All rights reserved. 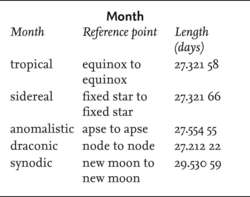 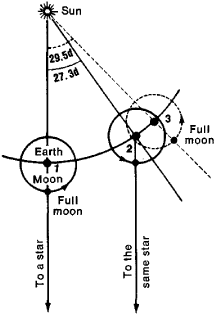 Feedback
Flashcards & Bookmarks ?
Please log in or register to use Flashcards and Bookmarks. You can also log in with
Flashcards ?
My bookmarks ?
+ Add current page to bookmarks
Mentioned in ?
References in classic literature ?
On the 12th of January, 1893, I was seventeen, and the 20th of January I signed before the shipping commissioner the articles of the Sophie Sutherland, a three topmast sealing schooner bound on a voyage to the coast of Japan.
View in context
On 2nd January we had made 11,340 miles, or 5,250 French leagues, since our starting-point in the Japan Seas.
Two days after crossing the coral sea, 4th January, we sighted the Papuan coasts.
View in context
So the countess remained in the country, and the count, taking Sonya and Natasha with him, went to Moscow at the end of January.
View in context
There are secrets in all families, you know)The case is, that a party of friends are invited to pay a visit at Enscombe in January; and that Frank's coming depends upon their being put off.
View in context
What put the "whole population of Paris in commotion," as Jehan de Troyes expresses it, on the sixth of January, was the double solemnity, united from time immemorial, of the Epiphany and the Feast of Fools.
It must be stated, in honor of the good sense of the loungers of Paris, that the greater part of this crowd directed their steps towards the bonfire, which was quite in season, or towards the mystery play, which was to be presented in the grand hall of the Palais de Justice (the courts of law), which was well roofed and walled; and that the curious left the poor, scantily flowered maypole to shiver all alone beneath the sky of January, in the cemetery of the Chapel of Braque.
View in context
Their departure took place in the first week in January. The Middletons were to follow in about a week.
View in context
"And that vacation begins on the first of January and ends on the thirty-first of December?"
View in context
It was cold in the room of the bell tower of the church on that January night and almost as soon as he came into the room Curtis Hartman knew that if he stayed he would be ill.
View in context
January 29th, being at anchor under Cape Gregory: a very hard gale from W.
View in context
I turned this truism over in my mind as, in the frosty dawn of a January morning, I hurried down the steep and now icy street which descended from Mrs.
View in context