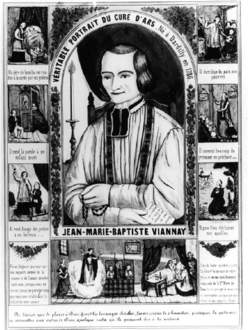 Jean-Baptiste-Marie Vianney, the Curé d’Ars, was not the most intellectual or wealthy of priests, but he was said to have remarkable powers of healing and clairvoyance, and was somehow able to financially support hundreds of needy people. Fortean Picture Library.

The man popularly known as the Curé d’Ars (the Curate of Ars), renowned for the healings that occurred around him, was born Jean-Baptiste-Marie Vianney at Dardilly, France, on May 8, 1786. He entered the priesthood as a young man, and he completed his studies at Ecully and the seminary at Verrieres. He was plagued by his inability to master Latin, but he finally completed his studies and was ordained in 1815. He was initially posted at Ecully. In 1818 he became the parish priest at Ars. Among his early accomplishments was the founding of an orphanage for girls.

Although of average intellectual accomplishment, as the Curé d’Ars, Vianney soon gained a reputation for his abilities in offering people spiritual counsel. Church members found him insightful and even supernatural in content. They began to come to him from neighboring parishes and then from across France, and finally from other countries. Hearing confessions became the most time-consuming part of his days. His ability to have paranormal information about an individual’s past or future became the matter of many testimonies. The number of healing stories, especially accounts of children, multiplied during and after his life.

It was said that he was plagued with a poltergeist, a noisy spirit that moves objects, for most of his adult life. He noticed that the manifestations were worse when a person was coming to him seeking consolation. He attributed the poltergeist to the devil.

Along with the clairvoyance and healings, people were amazed at the financial resources he was able to accumulate. He personally had no money, and his family was not wealthy. However, he regularly supported more than a hundred women and children, and he provided for the poor and destitute by overseeing the building of a number of institutional homes. With little publicity, the finances were regularly available to meet his commitments.

Feedback
Flashcards & Bookmarks ?
Please log in or register to use Flashcards and Bookmarks. You can also log in with
Flashcards ?
My bookmarks ?
+ Add current page to bookmarks
Mentioned in ?
References in periodicals archive ?
Jean Vianney did not have flood insurance because they were in areas that previously had never experienced any type of flooding, they are.
Floodwaters engulf Baton Rouge diocese
Jean Vianney Church opened the ceremony with a blessing.
Branching
Similarly, Jean Vianney's devotion to the sacrament of Penance is well known; less so, his punishing daily routine.
Generations of Priests
Jean Vianney House, a former residence for retired priests at 222 June St., to Botany Bay Construction Co.
Developer buys Vianney House; Diocese property once housed priests
Both Willson and Woods had visited Fr Jean Vianney in the previous months.
150 years since an invitation, on 1-2 October 1854, with enduring consequences for the church in Australia and New Zealand
Jean Vianney, the Cure d'Ars, as universal patron of priests to mark the 150th anniversary of his death.
Alternate views in the 'Year for Priests'