[′jig·iŋ]
(mining engineering)
A gravity method which separates mineral from gangue particles by utilizing an effective difference in settling rate through a periodically dilated bed.
McGraw-Hill Dictionary of Scientific & Technical Terms, 6E, Copyright © 2003 by The McGraw-Hill Companies, Inc.
The following article is from The Great Soviet Encyclopedia (1979). It might be outdated or ideologically biased.

a gravity-concentration method by which mixtures of minerals are sorted according to density in alternate upward and downward currents of water. The final products of jigging are tailings and concentrates of the desired minerals. Occasionally, an intermediate product is isolated that consists of concretions or mechanically produced mixtures of gangue particles and the desired mineral component.

In jigging, the sorting results from the periodic action of ascending and descending pulses of water on the bed of material being prepared, the jig bed, which rests on a jigging screen. 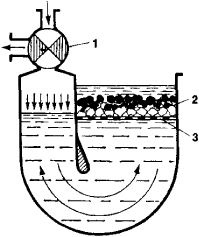 Figure 1 is a schematic representation of jigging. The pulsation causes the bed to alternately dilate and contract; as this takes place, particles with low density move to the upper layers of the bed, while those with high density are displaced to the lower layers. Each layer has its own characteristic density, and thus it is possible to separate the concentrate from the tailings and, in some cases, from the intermediate product.

The theory behind jigging was worked out by the German scientist P. Rittinger in 1867. Jigging technology was complicated by the principle of equal settling, which follows from Rittinger’s theory and which predicts that only a few narrow size-classes of particles will separate from the starting raw material. The subsequent work of the Hungarian scientist J. Fin-key (1924) and the Russian scientist P. V. Liashchenko (1935) on the settling of particles in a confined system demonstrated the feasibility of enriching dressing ores with a wider range of particle sizes.

A new theoretical treatment of jigging is based on the potential theory of jigging, which was advanced by the West German scientist F. Mayer in 1950. This theory analyzes the stratification of the entire jig bed, which tends toward a potential energy minimum, instead of analyzing the displacement of discrete particles. In the 1960’s the Soviet scientists N. N. Vinogradov and E. E. Rafales-Lamarka presented an analysis that treats jigging as a mass process that is affected by both random and strictly determined factors.

Jigging is used to dress minerals with a wide range of particle sizes—from 0.1 mm in alluvial ores to 250 mm in anthracites; the density of the jigged minerals can vary from 2,400 kg/m3, as in bituminous coals, to 15,000–19,000 kg/m3, as in gold and platinum. Jigging is sometimes the sole method of ore dressing in concentration plants, but in most cases it is combined with other methods, including preparation on concentration tables and sluices, magnetic separation, heavy-media separation, and flotation. It is one of the most economical methods in view of its high specific yield, low energy consumption, simplicity of the equipment used, and relatively high precision of separation— second only to the precision obtained with heavy-media separation. Jigging is a particularly suitable, economical method for extracting minerals in coarse inclusions, which do not require crushing to a small particle size, from coals and certain ferrous-metal ores. As of 1972, more than 40 percent of treated coal in the USSR was dressed by jigging.

Feedback
Flashcards & Bookmarks ?
Please log in or register to use Flashcards and Bookmarks. You can also log in with
Flashcards ?
My bookmarks ?
+ Add current page to bookmarks
Mentioned in ?
References in periodicals archive ?
One Florida angler having quite a bit of success with slow-pitch jigging is Benny Ortiz (@mrbennyortiz on Instagram).
A Pitch for Slow-Pitch Jigging: Gear and techniques for triggering strikes in the water column
The rest of the day resulted in us intermittently jigging a number of known marks--however, we were heavily distracted as it were, by the presence of good shoals of Yellowfin tuna on the surface.
Targeting the infamous king of the reef--the Dogtooth tuna on jig in Tanzania
Another key characteristic not found in catalogs is recovery time-how long until the rod tip comes to rest after a jigging motion.
Hot sticks: the joys of a good jigging rod
To complete the equipment list, make a jigging stick.
Jigging for bucks: to complete your calling routine, add the simplest and most obvious sounds of all
(7) The overall pattern of the dance is simple: in the first part the dancer performs a "basic step," often referred to as "jigging"; and in the second part, when the tune moves into lower pitches, the dancer moves into a different set of steps that are markedly fancy--and these steps change every time at this same section in the tune.
The social poetics of the Red River Jig in Alberta and beyond: meaningful heritage and emerging performance
Most often, the criteria for selecting jigs is the low operating cost (jigs only use power and have reduced maintenance schedules) but for high density cuts jigging is the only economical solution.
Jigging makes a comeback in minerals dressing
While jigging hasn't helped me ice a lot of pike, I have taken enough to allot one jig pole for just pike.
Ice fishing: with the right jigging techniques, you can bring in a fresh fillet tonight
Pike eat spoons but they much prefer horizontal swimming lures like the classic Jigging Rap.
Dancing Dandies for Pike
"This established track record underscoring its proven technology has established BATAC pneumatic jigging as an extremely cost effective option compared to the other more expensive beneficiation processes in use," Tuckey says.
BATAC jigs -- a unique success in iron ore
Once Sundin settles on a likely area, he breaks out standard jigging tackle.
Green Gold: ALGAE CONNECTION WALLEYES
I was using an Okuma Cedros jigging rod/reel A combo with 30-pound fluorocarbon leader on my main line of 30-pound braid.
Midwater Metal: Speed-jigging is tricky on a kayak. Slow down and reel in results with this alternative