(shĭn`tō), ancient native religion of Japan still practiced in a form modified by the influence of Buddhism and Confucianism. In its present form Shinto is characterized less by religious doctrine or belief than by the observance of popular festivals and traditional ceremonies and customs, many involving pilgrimages to shrines. Shinto, a term created to distinguish the indigenous religion from Buddhism, is the equivalent of the Japanese kami-no-michi, "the way of the gods" or "the way of those above." The word kami, meaning "above" or "superior," is the name used to designate a great host of supernatural beings or deities.

Shinto cannot be traced to its beginnings, because until the 5th cent. (when Chinese writing was introduced into Japan) the myths and rituals were transmitted orally. The written record of the ancient beliefs and customs first appeared in the Kojiki [records of ancient matters], prepared under imperial order and completed in A.D. 712. From those first Japanese accounts of the religion of times then already far past, it can be seen that a worship of the forces and forms of nature had grown into a certain stage of polytheism in which spiritual conceptions had only a small place. Nor was there any clear realization of a personal character in the beings held to be divine, and there were practically no images of the deities.

There was no one deity supreme over all, but some gods were raised to higher ranks, and the one who held the most exalted position was the sun goddess, known as the Ruler of Heaven. The emperors of Japan are said to be descended from the sun goddess Amaterasu-o-mi-kami, in unbroken line beginning with the first, Jimmu, who ascended his throne in 660 B.C. Thus the emperor was looked upon as divine, even while living; by divine right he was the chief priest, and as such he presided over ceremonies of foremost importance. Aside from this his religious responsibilities were delegated to others.

A Shinto shrine, unaffected by other religious influences, is a simple unpainted wooden building, having some object within it that is believed to be the dwelling place of the kami. After Buddhism entered Japan in the 6th cent. A.D., it had some influence on Shinto. In many shrines Buddhist priests serve, and worship under their direction is more elaborate than pure Shinto.

Beginning in the 17th cent. a vigorous effort was made to revive the old ways and ideas. After the Meiji restorationMeiji restoration,
The term refers to both the events of 1868 that led to the "restoration" of power to the emperor and the entire period of revolutionary changes that coincided with the Meiji emperor's reign (1868–1912).
..... Click the link for more information.  in 1868, the ancient department of Shinto rites was reestablished, giving Shinto much of its structure and identity as a religion. In 1882 all Shinto organizations were divided into two groups, state shrines (supervised and partially supported by the government) and sectarian churches. The ancient mythology was used to glorify the emperor and the state, and state Shinto became a powerful instrument in the hands of the militarists, who used it to glorify their policy of aggression.

Japan's defeat in World War II brought about the disestablishment of state Shinto. In 1946 in a New Year's rescript, Emperor HirohitoHirohito
, 1901–89, emperor of Japan. He was made regent in 1921 and succeeded his father, Yoshihito (the Taishō emperor), in 1926. He married (1924) Princess Nagako Kuni (1903–2000); a son and heir, Prince Akihito, was born in 1933.
..... Click the link for more information.  destroyed its chief foundation by disavowing his divinity; in the same year Gen. Douglas MacArthur forbade the use of public funds to support Shinto. In present-day Shinto there is no dogmatic system and no formulated code of morals. Shinto practices can be found abroad wherever large Japanese communities exist, as in the United States and South America. Some of the newer sects stress world peace and brotherhood as part of their philosophy. 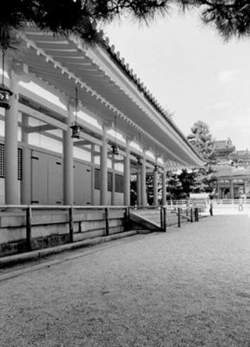 A visit to Japan, even in today's hustling and bustling, westernized, materialistic Japanese society, still reveals islands of peace and quiet in small shrines built to honor a local kami. (A Japanese concept, difficult to define, "kami" corresponds roughly to the Western notion of spirit; see Kami).

The four affirmations of Shinto revolve around tradition, joy, purity (as opposed to pollution), and festival. When the Olympic Games were held in Japan in 1998, television viewers were treated to this wonderful tradition as the opening ceremonies celebrated these affirmations in a uniquely Shinto fashion.

Even the famous Japanese sumo wrestling match is bound by Shinto tradition and follows specific rules. The rules, whether used for wrestling or any other ceremony, are easy to remember because in English they all begin with the letter "p."

In Shinto there is no concept of the "fall" of humanity. The world, the environment, and natural surroundings are all beautiful. But impurities and misfortunes, called tsumi, do arise. When this happens, rituals can invoke the kami to "carry the tsumi to the sea." Purification ceremonies are very important. They calm and cleanse, restoring a state of grace and beauty.

Rituals became traditionalized long, long ago. A priest, after a purification ceremony, might take a very carefully arranged offering of fruit or vegetables into a shrine and present it before the altar of the kami of the shrine.

Sometimes ritualistic dances are performed. Or the priest might intone a chant or traditional prayer.

At the close of the service the participants are often presented with a small branch or some other natural gift, showing that they have participated in the ceremony. Sometimes a small sip of wine is offered.

If the ceremony is a civic celebration, of course, the order and style is blown up large. Parades and festivals accompanied by pageants draw people from miles away to participate.

Shinto has been influenced by other religions. Buddhism, particularly Zen Buddhism (see Buddhism, Development of), has made its mark, and westernization, especially since World War II, has made it difficult for Shinto to continue in its traditional forms. But the spirit of Shinto is so ingrained in Japanese culture that there will always be a place for tradition, peace, and unity with natural surroundings. There continue to be places in Japan where a visitor can be surrounded by such beautiful, natural harmony that, in the words of the late Joseph Campbell, "You can't even tell where art leaves off and nature begins."

(literally, “the way of the gods”), a religion that developed in Japan and, alongside Buddhism, one of the most widely practiced religions in Japan. Shinto grew out of ancient cults of nature and ancestor worship. According to Shinto, each human individual is descended from one of the innumerable spirits and influential gods (kami), among whom the goddess of the sun, Amaterasu, held a special place. Under certain circumstances, the souls of the dead are capable of becoming kami. In turn, kami are capable of becoming ritual objects (shintai), such as swords, mirrors, figurines of gods, or plaques bearing the name of a divinity, which then become objects of veneration. Shinto worship consists of four elements: purification (harai), offerings (shinsei), a short prayer (norito), and a feast or communion (naorai).

In the fifth and sixth centuries, the imperial court began supervising the activities of the principal Shinto shrines. The most important rituals came to be performed by the emperor, who was proclaimed the supreme Shinto priest in the seventh century. The lack of a unified canon of Shinto literature was rectified in the seventh and eighth centuries, when two collections of ancient historical myths, legends, and traditions were compiled: the Kojiki (Records of Ancient Matters) and Nihongi, or Nihon shoki (Chronicles of Japan). The spread of Buddhism to Japan from Korea and China, which began in the sixth century, gradually eliminated the monopolistic position of Shinto. Under Japanese feudalism (tenth through the 16th century), Buddhism played the predominant role in the country’s religious life, and many Japanese came to profess two religions. For example, marriages, births, and local holidays were usually celebrated at a Shinto shrine, and memorial and funeral rites were usually observed according to the rules of Buddhism.

The 17th and 18th centuries saw the rise of the historical school of Shinto, represented by Kamo Mabuchi, Motoori No-rinaga, and others, which aimed at strengthening the religion and reviving the cult and full authority of the emperor. After the revolution of 1867–68 and continuing until the end of 1945, Shinto and Buddhism enjoyed the protection of the emperor and the government. Regular attendance at Shinto shrines and Buddhist temples was made compulsory for schoolchildren and civil servants.

During World War II, the Japanese military establishment made wide use of Shinto to inflame chauvinistic and militaristic sentiments and to ensure unquestioning obedience to the emperor and all who acted in his name. The defeat of imperialist Japan undermined the prestige of Shinto. In December 1945, Shinto institutions were separated from the state, some Shinto literature was banned, and members of the Shinto clergy lost their previous official status. On Jan. 1, 1946, the Japanese emperor publicly denied his “divine” origins. In the years that followed, however, Shinto gradually recovered its influence and somewhat adapted its doctrines to modern times. In December 1966 a government decree restored the status of a national holiday to the former Empire Foundation Day—Kenkoku no Hi (February 11); according to Shinto myths, on that day in 660 B.C., Jimmu ascended the throne. The country’s democratic forces have resisted efforts by the ruling circles to rekindle chauvinism through Shinto.

the indigenous religion of Japan, polytheistic in character and incorporating the worship of a number of ethnic divinities, from the chief of which the emperor is believed to be descended
http://www.jinja.or.jp/english/
Collins Discovery Encyclopedia, 1st edition © HarperCollins Publishers 2005