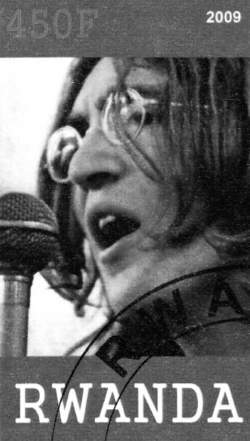 British musician and lyricist John Lennon was so famous his image appears on this stamp from Rwanda. Was his murder at the hands of Mark David Chapman a result of brainwashing?

A voice inside Mark David Chapman’s head told him to “do it, do it, do it,” and in the next few moments, one of the world’s most famous rock stars lay dying.

Certainly no sane and rational person can ever understand why someone would want to kill another, but if the assassination of John Lennon, one of the world’s most famous rock stars, had occurred in 1966 after the press misquoted him as saying that the Beatles were more popular than Jesus Christ, the crime would at least have had some context. Fourteen years after that confusion and after five years spent with his wife Yoko Ono and infant son in virtual solitude, Lennon was gunned down in front of his apartment building in New York City on December 8, 1980. Ironically, Lennon had autographed his new album, Double Fantasy, for his murderer, Mark David Chapman, twenty-five, when he and his wife had first left the Dakota apartments that evening.

Incredulously, the doorman at the Dakota shouted at Chapman, asking him if he knew what he had done. Chapman, having put away the .38 revolver that had slammed four flattipped bullets into Lennon’s back, now idly flipped through the pages of a paperback edition of Catcher in the Rye. He responded to the doorman’s angry query by calmly answering that he had just shot John Lennon.

In August of 1966, when the Beatles were in Chicago, an American teen magazine picked up on the interview that Lennon had given to the London Evening Standard on March 4 in which he remarked that with the skewed values of the 1960s, the Beatles had more influence on the kids than anything else, including Jesus. A firestorm of protest from the Bible Belt, conservative and right-wing preachers, and the Vatican was directed toward the Beatles, especially Lennon. Lennon apologized for the misunderstanding, but it was apparent to the Fab Four that the press was now prepared to pillory them for any word misspoken, and they soon stopped touring.

In the late 1960s Lennon became an outspoken opponent of the Vietnam War. In protest of Britain’s involvement in Nigeria and British support of the U.S. role in Vietnam, he returned the Member of the Order of the British Empire that he had received from Queen Elizabeth II. Following their honeymoon after their marriage in 1969, Lennon and Ono recorded “Give Peace a Chance,” which quickly became the peace movement’s international anthem.

After the Lennons moved to New York City in the early 1970s, President Richard Nixon and other right-wing politicians, such as Senator Strom Thurmond and Attorney General John Mitchell, viewed John Lennon as the Great Devil of all subversive activity. He was a popular, outspoken individual who could start riots and rebellions. J. Edgar Hoover agreed with their fears, and Lennon’s FBI file bore the large, handwritten, block-lettered motto: ALL EXTREMISTS SHOULD BE CONSIDERED DANGEROUS. Government agents were assigned to get enough on the Lennons so they could be deported.

By 1976 John and Yoko had finally resolved their strife with the U.S. immigration officials, Yoko had given birth to their first child, and John had decided to retire from the music business. Then, curious to see if he could still write songs, he picked up his guitar again in 1980.

As John Lennon lay semiconscious and bleeding to death, Mark David Chapman was preternaturally calm, almost serene in his demeanor. Later he said that he felt nothing at the time of the shooting, no emotion, no anger, nothing but silence in the brain. But just before he pulled the trigger, a voice inside his head said over and over again, “do it, do it, do it.”

Conspiracy theorists were quick to name Paul McCartney, Lennon’s chief rival in the Beatles, as hiring an assassin to put an end to their competition. Some even named Yoko and blamed her for nursing jealousies for the times Lennon had strayed from their marriage vows.

British lawyer-journalist Fenton Bresler thought that Chapman seemed just a little too much like Sirhan—his quiet, calm, unnatural tone and manner after the murder, his saying that a voice in his head kept telling him to do it, do it, do it. Bresler theorized in Who Killed John Lennon? that in Chapman we had another programmed, brainwashed assassin.

Picking up on Bresler’s theory, we are reminded that in the years of social upheaval in the 1960s, operatives in the CIA’s supersecret MK-ULTRA project were experimenting with LSD, hypnosis, and a host of other mind-control techniques, some of which had been tested by Nazi doctors on unwilling concentration camp prisoners. Bresler learned that Chapman had been signing his name as “John Lennon” prior to the assassination. He once told an interviewer that he had killed Lennon in order to promote J. D. Salinger’s novel Catcher in the Rye. Bresler thinks that the novel might have been the mental mechanism that triggered Chapman’s programming.

Chapman had not been a weird loner when he was younger. Friends knew him as a socially minded, likeable individual. His family pointed out that he had been a sensitive young man who was a camp counselor and good with kids. An odd factor in his biography is the period when he signed up for a YMCA overseas program—and in June 1975 ended up in Beirut. Although Chapman was a born-again Christian, he began taking drugs in college, had a nervous breakdown, and became a hospitalized mental patient. When he was released, he became so obsessed with John Lennon that he married a Japanese woman because of her resemblance to Yoko Ono.

Chapman’s attorney was astonished when, after he had spent six months diligently preparing to defend his client on an insanity plea, Chapman suddenly decided to plead guilty. A small voice inside his cell had spoken to him, Chapman explained, and told him to admit to the murder.

Mark David Chapman is imprisoned at Attica State Prison, near Buffalo, New York. He had been denied parole six times, as of 2010.