violet, common name for some members of the Violaceae, a family of chiefly perennial herbs (and sometimes shrubs, small trees, or climbers) found on all continents. Violets, including the genus Viola and similar related species, are popular as florists', garden, and wildflowers. Of this large group, with its fragrant blossoms ranging from deep purple to yellow or white, over 60 species are native to the United States and well over 100 varieties are offered in trade as ornamentals. Florists' violets are usually the sweet, or English, violet (V. odorata). Garden violets (often called violas) are generally hybrids and may be purple, blue, rose, yellow, white, or combinations of these, sometimes with double flowers. It became the flower of Athens; followers of Napoleon, who promised to return from Elba with violets in the spring, used the blossom as a badge; and in the United States a violet is the floral emblem of three states (New Jersey, Rhode Island, and Wisconsin). The flavors of various species, particularly the sweet violet, have been used for perfume, dye, and medicine and have been candied. The common pansy was originally derived, long ago, from the Old World V. tricolor, one of several species called heartsease and Johnny-jump-up; the Eastern field pansy, a wildflower of North America, is a separate species. Some unrelated plants are also called violets, e.g., the African violet of the family Gesneriaceae (gesneria family) and the dog-toothed violet of the family Liliaceae (lily family). True violets are classified in the division Magnoliophyta, class Magnoliopsida, order Violales, family Violaceae.
The Columbia Electronic Encyclopedia™ Copyright © 2022, Columbia University Press. Licensed from Columbia University Press. All rights reserved. 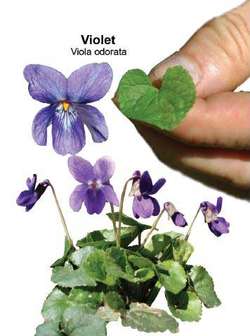 Another famous edible flower (including leaves) with a sweet perfumes flavor. Violets are floral, sweet and beautiful as garnishes in salads, desserts and drinks. Heart-shaped leaves with slightly serrated edges are edible, and tasty when cooked like spinach. Flowers may be deep purple, blue, pink, or white. All have 5 petals, which may have a yellow (fur) or beard on the inside of two of the petals. Whole plant is edible, including roots. Tea from whole plant used for digestive disorders and headache. (contains saliclic acid- “aspirin”). Flowers and leaves commonly used for respiratory ailments associated with congestion, coughing, and sore throat. Root powder is laxative. Taking too much of the root may cause vomiting. Plant contains eugenol, ferulic-acid, kaempferol, quercetin, scopoletin, which are used in the treatment of cancer, AIDS, arthritis, gum disease, expelling parasites and treating malignant growths. Anti-inflammatory, can be used internally and externally for pimples, abscesses, tumors, and swollen glands. Put flowers in bath. Relaxing aroma.
Edible Plant Guide © 2012 Markus Rothkranz

What does it mean when you dream about a violet?

A light shade of purple and pink, violet is regarded as a spiritual color by many religions. It symbolizes purification and illumination.

[′vī·ə·lət]
(optics)
The hue evoked in an average observer by monochromatic radiation having a wavelength in the approximate range from 390 to 455 nanometers; however, the same sensation can be produced in a variety of other ways.
McGraw-Hill Dictionary of Scientific & Technical Terms, 6E, Copyright © 2003 by The McGraw-Hill Companies, Inc.

any of a group of colours that vary in saturation but have the same purplish-blue hue. They lie at one end of the visible spectrum, next to blue; approximate wavelength range 445--390 nanometres

1. any of various temperate perennial herbaceous plants of the violaceous genus Viola, such as V. odorata (sweet (or garden) violet), typically having mauve or bluish flowers with irregular showy petals
2. any other plant of the genus Viola, such as the wild pansy
3. any of various similar but unrelated plants, such as the African violet
Collins Discovery Encyclopedia, 1st edition © HarperCollins Publishers 2005

Feedback
Flashcards & Bookmarks ?
Please log in or register to use Flashcards and Bookmarks. You can also log in with
Flashcards ?
My bookmarks ?
+ Add current page to bookmarks
Mentioned in ?
References in periodicals archive ?
Alyssum, forget-me-not, Johnny-jump-up, lobelia, and nemesia can be planted from seeds or seedlings (when starting from seed, all but the lobelia are best planted in fall).
Floral companions to plant under roses
Some of Rosemary's favorites include larkspur, an old-fashioned flower from the delphinium family that grows to tall and stately spikes in the spring; foxglove, a tall plant with bell-shaped flowers in many colors that blooms well in the spring but fades in our summers; Johnny-jump-ups, colorful annuals that produce vibrant blooms of deep purple and yellow all summer; and Queen Anne's lace, a hardy plant that easily reseeds and produces a white, airy bloom.
In full bloom: after years engaging in a labor of love, a Ridgeland couple's home landscape has become their ideal escape
The petals themselves -- including blossoms of larkspur and Johnny-jump-ups, daisies and verbena, wild rose and sunflower -- are purchased from local gardeners in Richfield and a contract grower in Chandler, Ariz., with some exotics picked up outside the area.
Petal Pusher
Has: ladybells, daisies, Johnny-jump-ups, marigolds, assorted annuals and perennials, shrub cuttings, rooted thyme and mint, assorted tree seeds or sprouts, heirloom tomatoes
SEED SWAP
The youngsters each filled two six-packs with fertilized potting soil, then planted seeds in each container, watered them and inserted identifying markers to label them as tomatoes, lettuce, Johnny-jump-ups, cosmos, marigolds and sweet peas - all under the eye of Tina Rovito Bemis, co-owner of Bemis Farms.
Budding leaders-to-be explore world of learning in 4-H
Nasturtiums and Johnny-jump-ups are often available at upscale grocery stores.
Blooming salad: take your salad to a whole new level by using great-tasting flowers from your garden
Minty: mint (Mentha spp.) bee balm (Monarda didyma), and Johnny-jump-ups (Viola tricolor).
Eat your flowers, please! (2003 Feature Section--"Themes and Extremes")