[zhȯr′dän‚mā·triks]
(mathematics)
A matrix whose elements are equal and nonzero on the principal diagonal, equal to 1 on the diagonal immediately above, and equal to 0 everywhere else.
McGraw-Hill Dictionary of Scientific & Technical Terms, 6E, Copyright © 2003 by The McGraw-Hill Companies, Inc.
The following article is from The Great Soviet Encyclopedia (1979). It might be outdated or ideologically biased.

(also Jordan form of a matrix, or simple classical matrix). With every square matrix A = ǀǀaikǀǀn1 there is associated a class of similar matrices. This class of matrices always includes a matrix of special normal (canonical) Jordan form, named after M. E. C. Jordan. The Jordan form of a certain eighth-order matrix is given in Figure 1. 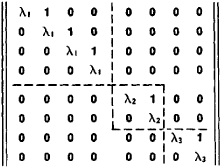 Special square blocks, enclosed by broken lines in Figure 1, lie on the principal diagonal. All elements of the matrix that lie outside these blocks are equal to zero. The (complex) numbers forming the principal diagonal of a block are the same; for example, in the first block they are all equal to λ1, and in the second to λ2. The elements of the diagonal immediately above the principal diagonal equal to unity. All other elements in the diagonal blocks are equal to zero. The matrix in Figure 1 contains three diagonal blocks, of which the first is of order 4, and the second and third of order 2. In the general case, the number of blocks and their orders are arbitrary. It is also possible for some of the numbers λ1, λ2, … to be equal. The initial matrix A in this example has the elementary divisors (λ – λ1)4, (λ – λ2)2, and (λ – λ3)2. A Jordan matrix is uniquely determined by its elementary divisors.

If the matrix A has the Jordan form I, then there exists a nonsingular matrix T such that A = TIT–1. Replacement of matrix A by the similar Jordan matrix I is called a reduction of matrix A to normal Jordan form.

To get an idea of the uses of the Jordan form of a matrix, we consider a system of linear differential equations with constant coefficients:

In matrix notation we have

or in matrix notation

Substituting this expression for x in (1), we obtain

where matrix I is related to matrix A by the equation

The matrix T is usually selected in such a way that matrix A is a Jordan matrix. In this case, the system of equations (2) is much simpler than system (1). For example, if matrix A = ǀǀaikǀǀ81 (n = 8) has the Jordan form given in Figure 1, then system (2) will have the form

Integration of this system reduces to a number of integrations of single differential equations.

Feedback
Flashcards & Bookmarks ?
Please log in or register to use Flashcards and Bookmarks. You can also log in with
Flashcards ?
My bookmarks ?
+ Add current page to bookmarks
Mentioned in ?
References in periodicals archive ?
It is known that, for every matrix A, there exists a nonsingular matrix S transforming it to the corresponding Jordan matrix form [LAMBDA] = [S.sup.-1] AS.
Conditional Stability and Asymptotic Behavior of Solutions of Weakly Delayed Linear Discrete Systems in [R.sup.2]
where J is the Jordan matrix. Systems (1) and (10) have the same controllability properties, that is, for arbitrarily eigenvalues [[lambda].sub.i] of matrix B, and rank([[lambda].sub.i][I.sub.N] - B, Q) is the same as rank([lambda].sub.i][I.sub.N] - J, S), and rank(Q) = rank(S).
Maximum Matchings of a Digraph Based on the Largest Geometric Multiplicity
If the system matrix is in a special form, for example, is a diagonal matrix or a Jordan matrix, or when the order of the system under consideration is not large, analytical solution of Gram matrix will be obtained [1].
Computation of gram matrix and its partial derivative using precise integration method for linear time-invariant systems
where [J.sub.[PHI]] is the Jordan matrix associated with [L.sub.[PHI]].
Bipartite consensus control of multiagent systems on coopetition networks
Furthermore, let [J.sub.[mu]] denote the Jordan matrix which is the direct sum of elementary nilpotent Jordan blocks of sizes [[mu].sub.1], ..., [[mu].sub.k].
Q-rook placements and Jordan forms of upper-triangular nilpotent matrices
It is well known that the companion matrix C and the Jordan matrix J are related through the confluent Vandermonde matrix V by [V.sup.-1]CV = J.
Recursive computation of inverses of confluent Vandermonde matrices
Consider the following three cases of the Jordan matrix A in four-dimensional nonlinear systems.
(i) The Jordan matrix A has two pairs of pure imaginary eigenvalues.
(ii) The Jordan matrix A has one nonsemisimple double zero and a pair of pure imaginary eigenvalues.
(iii) The Jordan matrix A has two nonsemisimple double zero eigenvalues.
Normal form for high-dimensional nonlinear system and its application to a viscoelastic moving belt