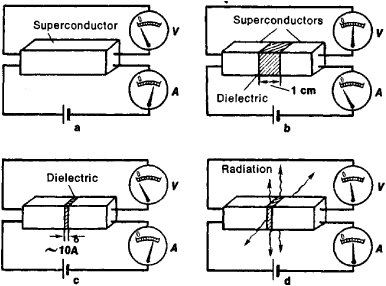 Feedback
Flashcards & Bookmarks ?
Please log in or register to use Flashcards and Bookmarks. You can also log in with
Flashcards ?
My bookmarks ?
+ Add current page to bookmarks
Mentioned in ?
References in periodicals archive ?
The topics of the papers include the Anderson model of magnetic impurities, the study of spin glasses, the fluctuating valence problem and superexchange, the Josephson effect, and the "Higgs" mechanism in elementary particle physics.
A Career in Theoretical Physics, 2d ed
NIST research has helped to develop and refine electrical standards using the quantum Hall effect and the Josephson effect, which are both based on quantum physics.
The ampere and electrical standards
* Helium-3 atoms quantum mechanically shuttling back and forth between two reservoirs connected by an array of tiny apertures demonstrate the superfluid analog of the Josephson effect in superconductors (152: 69*).
Science news of the year: 1997
'He discovered what has since become known as 'the Josephson effect' as a 22-year-old graduate student.
The scientist with the motto 'take nobody's word for it' whose work makes Wales great
The "optical' quality of the high-temperaturesuperconductivity can make the Josephson effect appear at temperatures above those where resistanceless conduction sets in, Teller proposes.
Superconductivity and quantum mechanics
In the Josephson effect, a direct voltagein a particular kind of superconducting junction will cause a stepwise alternating current to flow, and under certain conditions this current can generate a radio wave.
Superconductivity: a hard frost
In these seven papers contributors describe their research in facets of Josephson junctions, including progress in fabrication techniques for circuits of small capacitance, the order parameter symmetry of unconventional superconductors by Josephson effects, annular Josephson tunnel junctions that monitor causal horizons, non-equilibrium phase diagrams of current-driven arrays, Josephson vortex behavior in certain superconducting ceramics under a low frequency magnetic field, thermomagnetic shock waves in the vortex stage of Type-II superconductors and finite temperature effects on the quantum phase transition in disordered d-wave superconductors.
Josephson junction and superconductivity research
Then came the real second Welsh-born Nobel prize winner: Brian D Josephson who was awarded it in1973 for his services to physics and 'in particular for those phenomena which are generally known as the Josephson effects'.
Letter: Third Nobel for Wales