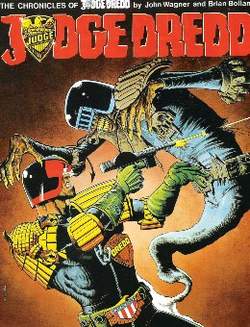 (pop culture)
Judge Dredd, one of comics' most ruthless lawmen and star of the British cult sci-fi comic 2000 AD, has nothing to fear as judge, jury, and executioner of the post-apocalyptic metropolis Mega-City One—except for demented monstrosities like Judge Death. The brainchild of writer John Wagner and artist Brian Bolland, Judge Death is a supernatural ghoul from another dimension who has come to wreck havoc on Mega-City One. Witnessing the truism that all crime is committed by the living, Judge Death reasoned that life itself is a crime, so he embarked on a personal mission of destroying all life. As such, this super-fiend reaches into the chests of his victims to extract their heart. Although Dredd is forever hunting his rival, Judge Death cannot be killed by ordinary means; once his physical body is destroyed, his spirit moves on to possess another human being. Judge Death frequently operates with his equally horrific brothers Judge Fear, Judge Fire, and Judge Mortis. Judge Death first appeared in a 1980 issue of 2000 AD, but has regularly confronted his nemesis in his quest to turn the dystopian Meta-City into a wasteland. Since Dredd's inception in 1977, the character has inspired a Daily Star newspaper strip, his own annuals and specials, a monthly “megazine,” and a 1995 live-action motion picture (starring Sylvester Stallone in the lead role), the majority of which have included appearances by Judge Death. Dredd and Death are the subjects of several computer games and a host of assorted merchandise. In 2005, the adversaries starred in the DC miniseries Judge Dredd: Dredd vs. Death.
The Supervillain Book: The Evil Side of Comics and Hollywood © 2006 Visible Ink Press®. All rights reserved.

Feedback
Flashcards & Bookmarks ?
Please log in or register to use Flashcards and Bookmarks. You can also log in with
Flashcards ?
My bookmarks ?
+ Add current page to bookmarks
Mentioned in ?
References in periodicals archive ?
According to the reporter of the National Iraqi News Agency / NINA / that the IS elements arrested these people, mostly from al-Jumailat clan after refusing to volunteer in the IS forces or pledge of homage and issued a legitimate Judge death sentence after five days of their arrest.
The IS executed 15 people in Fallujah after they refused to pledge allegiance
But ut ut ut ut ut I'm ha "It w take o "It would be great to see Dredd take on the Dark Judges, particularly Judge Death. That would be a fantastic avenue to explore."
HERE COMES THE JUDGE; INTERVIEW KARL URBAN SAYS HE RELIVED HIS CHILDHOOD WHEN HE AGREED TO PLAY DREDD
The study found that neonatologists and neonatal nurses were both more pessimistic about pediatric outcomes, and also more likely to judge death to be the best outcome, than were the parents or siblings of the same children.
Euthanasia is out of control in the Netherlands: changing the rules to accommodate bigotry