a system of signs to record data in judging agricultural animals. The key simplifies the notation and makes it more graphic. The judging key for the description of the points of the animals’ exterior consists of a number of arbitrary signs in a rectangle that graphically represents the animal’s body (see Figure 1). It is used most often in the individual judging of fine-wooled sheep. 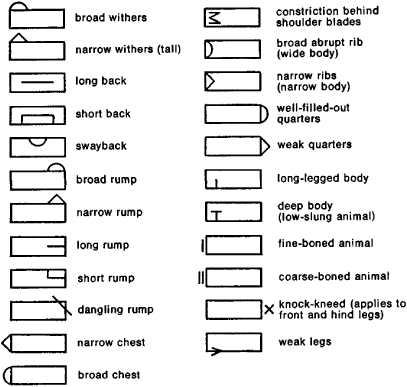 In using the judging key, the breed of the sheep is shown by the first two letters or initials of the name, such as AS for Ascanian or SM for Soviet Merino. A desirable type of animal is designated by the letter S. The points of the exterior are designated by the signs on the rectangle. A strong constitution is shown by the letter C and with an inclination toward delicacy by CD and toward coarseness by CC. A large amount of wool (denseness) is shown by ww, a satisfactory amount by w, a small amount by wr, and very sparse wool by wr-. The length of the wool is indicated by the letter L with the addition of the length (in cm) of the staple (for example, L7.5 means wool 7.5 cm long). The fineness of the wool is recorded by figures that designate the fineness qualities according to the Soviet classification. Even fleece is designated by the letter e, not completely even by e-, and uneven by e=. A normal amount of suint is shown by s, a lack of suint by s-, and so forth. The overall rating of the animal by a five-point system is shown by the number of zeros: 00000, an excellent animal with outstanding wool productivity; 0000, a good animal; 000, a satisfactory one; and 00, unsatisfactory.